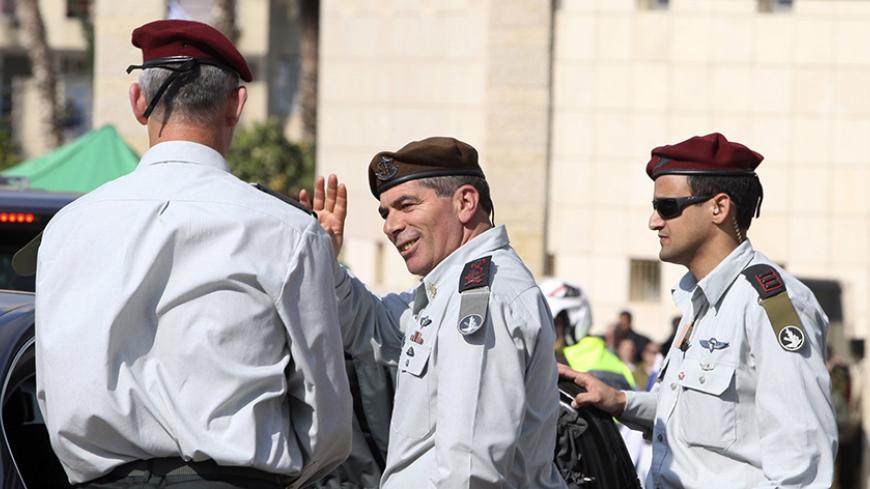 Outgoing Lieutenant-General Gabi Ashkenazi (C) waves to soldiers as he leaves after a handover ceremony at Kirya base in Tel Aviv, Feb. 14, 2011. - REUTERS/Baz Ratner

Although the comptroller placed responsibility on Ashkenazi’s shoulders for adopting a series of "problematic" actions, to say the least, on the public and moral levels, and criticized Barak more judiciously, the results of the survey showed that Ashkenazi’s public reputation was virtually unaffected: 48% stated that they believed the former chief of staff while 17% believed the defense minister. Moreover, 65% wanted to see Ashkenazi get involved in politics, while 21% viewed him as a worthy candidate for the premiership.

According to August reports that were not repudiated, Yesh Atid chairman Yair Lapid is vigorously courting Ashkenazi and even met with him. It seems not much has changed since the opinion poll, and the public still loves Ashkenazi. We can count on Lapid, who follows all the polls, having conducted an in-depth study on Ashkenazi and concluding that if he gets Ashkenazi on his side, he’ll be able to attract moderate right-wing voters and has a chance of winning the elections.

Let us recall that Lapid’s courting tactics began even before Channel 2 reported Aug. 12 that State Attorney General Yehuda Weinstein is expected to close the case against Ashkenazi and not prosecute him in court.

Although the attorney general has not announced his final decision, the news unsurprisingly caused a storm in the political and media arenas. Such a decision would have broad political implications in the current leadership vacuum that has developed in the left and center. For this reason, Ashkenazi represents the worst nightmare of Prime Minister Benjamin Netanyahu, who in all likelihood intends to run for his fifth term of office.

Ashkenazi is a “security ace” par excellence. He was the chief of staff who rehabilitated the Israel Defense Forces after the Second Lebanon War. He is a folksy person, accessible, and as a bonus is even a Mizrahi. Netanyahu can never paint “our brother Gabi” as a leftist who won’t know how to deal with security threats.

The other person who is troubled by Ashkenazi is Zionist Camp leader Isaac Herzog. Much ink has been spilled in the past on Ashkenazi’s inclination to run for the premiership from within the Labor Party (today's Zionist Camp). When he was still chief of staff, Ashkenazi was vetted for the premiership by the party’s top brass, Binyamin Ben-Eliezer and Ofer Eini. These two kingmakers have long since ceased deciding fates in the party, but should Ashkenazi decide to go to the Zionist Camp, he’ll easily find supporters there that will back his candidacy.

“I'm happy to welcome anyone who enters politics, especially a worthy person who can join the Zionist Camp and help the party and me win the next election. Gabi Ashkenazi is a worthy man; I am very sorry about the dispute between him and [Housing and Construction Minister Yoav] Galant. I am certain that Gabi Ashkenazi is waiting until the case against him is truly closed.” This measured, impassive statement by the Zionist Camp leader on the Israeli Army Radio station, intended to convey nonchalance and self-confidence, actually shows the polar opposite. Herzog clearly realizes that the moment that Ashkenazi announces his intentions to run for party chair, all bets will be off. Herzog knows that the former chief of staff has a good chance of winning the party’s primaries after its rousing defeat in the last election.

The whole horror show started with Galant, a retired general and one of the protagonists in the Harpaz affair who is convinced to this very day that Ashkenazi was the one to torpedo his appointment as chief of staff. The publicity about the anticipated closure of the case against Ashkenazi really threw Galant off balance on a live TV broadcast. Galant’s uninhibited statements on Channel 2 — he accused Ashkenazi of being a “traitor” who needs to “sit in prison” — shows everyone that Ashkenazi’s possible entry into politics is a powder keg. Galant today is a political animal, a high-level Kulanu member, and the way he sounds now, it seems that he won’t have a moment’s peace until he publicly and politically crucifies his bitter enemy.

And Ashkenazi, if he does decide to enter politics, must take into account that these are only the opening shots. His daily bread will involve many more interviews in this vein, commentaries and reports that will burn him on a daily basis. He will be painted as a shady character who failed on moral and leadership grounds. He will be portrayed as an unworthy candidate, as a glory hound. His many adversaries will pass up no opportunity to humiliate him with quotes from the investigations and reports, and there is no shortage of such material. In short, it won’t be a walk in the park, but a call to battle.

These powerful reactions show that Ashkenazi is a candidate with strong public support, in spite of the affair that has been hanging like a black cloud over his head for five years. There is no doubt that the former chief of staff now occupies a unique place in the center-left of the political map. If he does choose to enter the political fray, he will almost certainly be the center-left candidate for the premiership. Lapid understands this, so he's hurrying to give him an immobilizing bear hug.

Despite his merits, it must be noted that Ashkenazi has no record yet of publicly leading any campaign on civil issues; he has no record of leading any diplomatic program or making substantial statements on matters unrelated to his military service. It is well known that Ashkenazi opposed an assault on Iran and that his diplomatic worldview leans to the left (in other words, a diplomatic arrangement with the Palestinians). However, he has never presented a comprehensive viewpoint on the issue, nor on the socio-economic issues highly valued by the public since the 2011 social protest movement.