Israeli opposition chair Isaac Herzog told Al-Monitor that he urged Palestinian President Mahmoud Abbas to join the reported contacts between Israel and Hamas and work to create a larger package deal with Israel before he leaves politics. 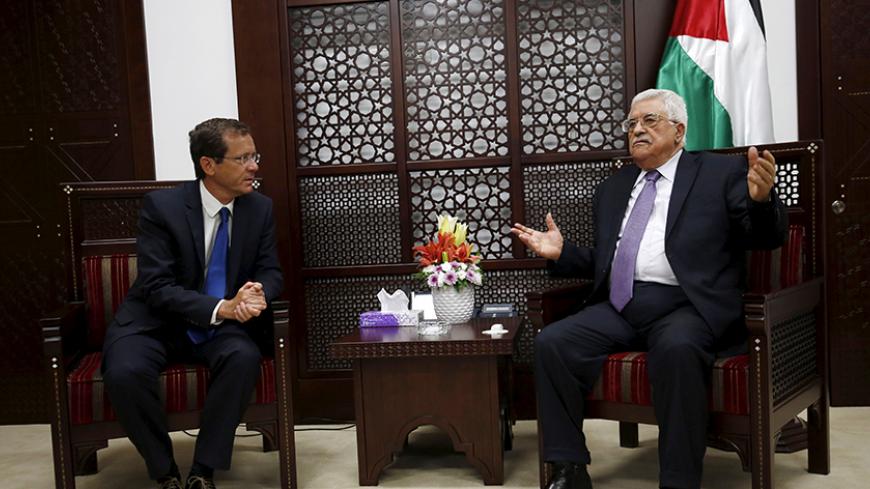 His meeting with Palestinian President Mahmoud Abbas on Aug. 18 was an encounter Zionist Camp leader Isaac Herzog had requested some time ago — immediately after losing to Prime Minister Benjamin Netanyahu in the March 17 elections. The only way the Zionist Camp party leader could differentiate himself from Netanyahu was to meet with Abbas and to demonstrate an affinity for and commitment to any kind of diplomatic process. The problem was that the Palestinian leader was not exactly enthusiastic about the idea. Spring went, summer arrived and suddenly, while Herzog was vacationing with his family in Cyprus, the telephone call came from presidential spokesman Nabil Abu Rodeina: The chairman would be happy to see you, Herzog was told.

They sat together in Ramallah for almost an hour and a half, just the two of them. As opposed to prior visits and meetings, this tête-à-tête was without fanfare: no media presence, no escorts nor other participants. Just Abbas and Herzog sat together, the two great losers of the previous year. Herzog had almost made it to the prime minister’s office when he lost to Netanyahu at the last minute and Abbas had remained the abandoned rear guard without an agenda, a diplomatic horizon, any kind of negotiations or international interest. Of the two of them, only Abbas is mulling possible retirement. Herzog, by contrast, is a relatively young politician who believes that his future is still before him.

What pressed the veteran Palestinian leader to meet with Israel’s opposition chairman? The common assessment is that Abbas is very worried about telltale signs and publicity regarding real (though indirect) feelers between Israel and Hamas. Abbas is afraid of being left behind. A 10-year arrangement between Israel and Hamas in the Gaza Strip is liable to make Abbas irrelevant. Therefore, if Netanyahu can talk to Hamas, Abbas’ main opposition, then clearly Abbas can talk to Herzog, Netanyahu’s main opponent.

Herzog urged Abbas to join the contacts and attempt to create a larger package deal with Israel. Why should the Israeli government confine itself to talking to Gaza alone when it can raise the ante, adopt confidence-building measures and work for a settlement package deal for all the territories? “You have to ride this wave,” Herzog reportedly told Abbas, “You can’t let yourself remain behind.”

After the meeting, Herzog told Al-Monitor, “This is a propitious time for the entire region; almost everyone is converging in the same place. The joint interests of the various players are mounting. Everyone wants peace and quiet; everyone wants to focus on their mutual enemies, which are Islamic State, Iran and the Shiites. Under such circumstances, Abbas cannot allow himself to lag behind. He also needs to take advantage of the situation and get on the bandwagon.”

Asked what, exactly, Abbas should do, Herzog said, “He should set out his conditions for entering into the Gaza plan. Hamas should not be allowed to come out on top from everything that’s been going on recently. We can still find ourselves in a situation in which Hamas brings 10 years of calm to Gaza allowing for prosperity, while Mahmoud Abbas finds himself on the cusp of a third intifada in Ramallah. Instead, everyone should be able to profit and Abbas, who truly fights terror and is a legitimate leader, cannot be left behind.”

At the same time, Netanyahu’s government denies reports about contacts with Hamas. “Not directly, not through another country and not through intermediaries," read an official statement released by the prime minister's office at the beginning of the week, stating that Israel has no contacts with Hamas and there is no agreement in the pipeline.

If so, how can one explain the current reality in which numerous figures headed by former Quartet envoy Tony Blair are diligently running the course between Gaza and Israel? It’s very simple: This is Netanyahu’s method. Netanyahu will always make sure he has wiggle room for denial. He’ll send faceless emissaries that he can repudiate at the moment of truth along the lines of “it’s only an American proposal” or “non-binding, unofficial contacts.”

And that is exactly the situation this time around, as well. The contacts with the Palestinians in Gaza are coordinated by the Israeli security apparatus. At the head of the pyramid stands Yoav (Poli) Mordechai, the coordinator of Government Activities in the Territories. An Arab newspaper actually proposed, humorously, that Mordechai replace Abbas after the latter retires. Mordechai, who speaks fluent Arabic and makes numerous appearances on the Arab electronic media outlets in the Middle East, has become a familiar figure on practically every screen from Gaza to Cairo, Ramallah and Amman.

One of the problems is trust. Abbas does not trust the Hamas leadership at all, and vice versa. The chasms separating the two entities are deeper than their commonalities. At the same time, the situation in the West Bank is continuing to deteriorate. “I am worried about losing control,” Abbas admitted to Herzog, according to diplomatic sources. “Our streets are raging; the murder in Douma fanned the flames.”

Abbas asked President Reuven Rivlin as well as Prime Minister Netanyahu to do everything possible to apprehend the murderers of the Dawabsha family. (The toddler, Ali, and his father, Saad, died of their wounds, and another son and the mother are still fighting for their lives.) Abbas feels that in order to restore peace, it is imperative to capture the murderers and serve justice to them. Then Herzog spoke to Abbas about the wave of terror attacks from the Palestinian side, including the daily stabbings of Israelis, the hurling of Molotov cocktails and stones, and a general deterioration of the territory to a dangerous level. Abbas detailed the Palestinian Authority’s anti-terror activities but claimed that he is unable to pinpoint and arrest every Palestinian with a knife who decides to retaliate. Abbas also complained about the open-fire policies of the Israel Defense Forces and other security forces. In most cases, Abbas argued, the attackers could have been neutralized by shooting at their feet, and some of them have been shot when they no longer posed a threat. The bottom line is that Abbas warned about a third intifada. The pressure cooker is heating up, he says, and eventually it may explode.

In his meeting with Herzog, Abbas verified the reports regarding his deliberations over retiring. Abbas’ resignation threats are viewed by the Israeli security apparatus as serious, more serious than in the past. There is no diplomatic expectation, global interest in the Palestinian problem is dissipating, the Arab countries are busy with their own trials and tribulations, the political situation in the territories is touchy and the economic situation is hard. Most worrisome of all is that currently there are no signs of renewing negotiations and no responsible party (the Americans?) interested.

Abbas is already over 80 years old. He is tired and in constant danger, as swathes of the Palestinian people view him as a traitor who cooperates with the Israel security system. “Ultimately, he’ll break [under the pressure] sometime or other,” an IDF source said on condition of anonymity, though no one knows exactly when that might happen. Former President Shimon Peres celebrated his 92nd birthday this week and has no intentions of ever retiring. The question is whether Abbas is a chip off Peres’ imperishable material.

If Abbas really does pick up and leave, said Herzog, Israel will find itself missing him. He emphasized that there is no doubt that Abbas is the first Palestinian leader who truly fought against terror and chose the diplomatic route. "I’m not naive," he added. "There is no permanent arrangement on the agenda, but we really could show some creativity. We could adopt financial and other steps such as confidence-building. We have to do everything to bring back hope."