Abbas must accept Gaza, West Bank will not unite

A long-term truce between Israel and Hamas could perpetuate Gaza's separation from the West Bank, but that might be the price of dialogue between Israelis and Palestinians toward a future comprehensive agreement. 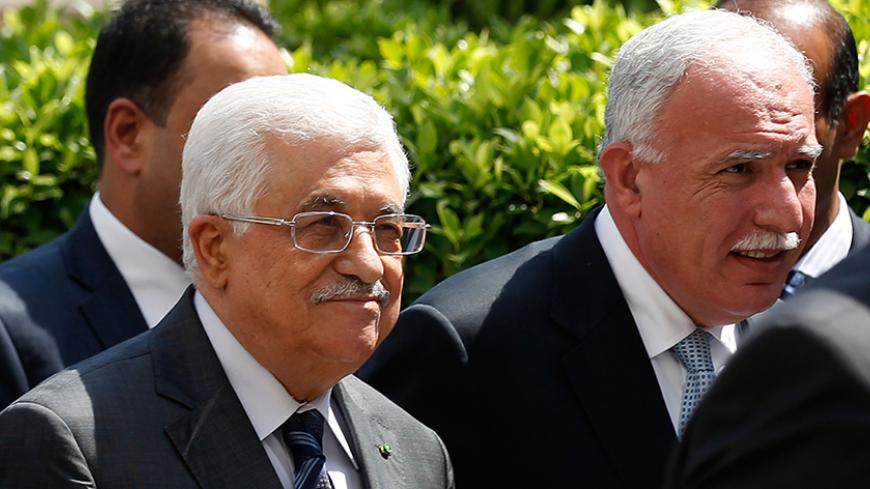 Information is leaking out slowly, but each new tidbit seems to indicate that Israel and Hamas are in serious discussions about reaching a long-term agreement. Ahmed Youssef, who was chief of staff for the movement’s former leader, Ismail Haniyeh, confirmed to Al-Hayat Aug. 18 that Israel has a detailed outline for a truce formulated by Tony Blair, the Quartet’s former emissary to the region. Based on what Youssef said, it seems that Hamas is prepared to accept the outline and they are now waiting for Israel to agree, so that the negotiating teams could be formed and the practical details of the agreement could be hammered out. Youssef added that a Hamas delegation is now waiting for Egypt’s approval to set out for a series of meetings with senior officials in Cairo, Turkey and Qatar, at which they would discuss the truce outline.

In an interview with France 24, Palestinian Foreign Minister Riyad Malki confirmed that an agreement is taking shape that will end the siege on the Gaza Strip. “We don't know if it will happen tomorrow or in a month from now," he told the interviewer, "but all indications are telling us that yes, there is a serious level of negotiations. There are mediators who are doing their utmost to reach this agreement.”

Senior Palestinian Authority figures are closely and anxiously following the news. As far as they are concerned, an agreement between Israel and Hamas would mean perpetuating the separation of Gaza from the West Bank, or in more blunt terms, creating two states for one people. Such concern formed the background of the meeting that Palestinian President Mahmoud Abbas asked to have in the PA headquarters in Ramallah with Israeli opposition leader Isaac Herzog. At this Aug. 18 meeting, Abbas expressed his concerns about such an agreement, claiming that it would be especially damaging to his own status and that of the Fatah movement as the representatives of the Palestinian people.

Herzog responded by speaking out against such an agreement. “I have no problem with achieving calm in Gaza, but it must be achieved in coordination with Abbas and through negotiations that will allow him to re-enter to the Gaza Strip,” he said in an interview with Israeli news site Walla.

Abbas apparently still believes that he can return to Gaza and put things back the way they once were. In other words, he believes that Fatah can still control all of the Palestinian territories. But eight years have passed since Fatah was thrown out of Gaza by force. In that time, Hamas has succeeded in creating a full-fledged military regime in Gaza, even if senior Palestinian officials in the West Bank refuse to recognize that this development is irreversible. Despite the crisis Hamas is facing, there is no logical scenario in which Hamas would give up control of Gaza, disarm its military forces and allow the PA, headed by Abbas, to return to Gaza.

Since the 2007 coup, Abbas has made countless mistakes, effectively perpetuating the division of the Palestinian territories into two distinct geographical, political and cultural domains. The seeds of this division were sown in 2006, when Hamas won the Palestinian elections. As chairman of the PA, Abbas refused to accept the outcome of the vote and transfer power to Hamas in an orderly fashion. In fact, he tried to interfere with the results in a very brusque manner. The outcome is familiar to everyone, ending with a military coup.

Abbas believed that if Hamas suffers from a severe economic crisis, it would give up Gaza willingly. He even delivered a message to Israel in this vein while Ehud Olmert was prime minister. In fact, that consideration was one of the reasons behind the Israeli decision to strangle Hamas with a siege.

After last year’s Operation Protective Edge, Abbas has refused to lead the program to rehabilitate Gaza, even though the donor nations would prefer that he oversee it and the EU supports such a move. Before that, he formed a unity government with Hamas despite Israel’s unequivocal objection. The formation of that coalition caused the collapse of talks between the PA and Israel, and did not lead to any improvements whatsoever to the situation of the Palestinian people.

Hamas is a fact. So is its control over the Gaza Strip. For several years now, Israel has been embroiled in a bitter debate over whether it should take steps to bring down the Hamas government in Gaza and restore control to the Fatah leader, by force if necessary. That still hasn’t happened, not in Operation Cast Lead in December 2006 and not in Operation Protective Edge in July-August 2014. Furthermore, while Israel may not admit it publicly and officially, it has come to accept that the Hamas regime in Gaza is not ending in the foreseeable future. It is now time to take practical steps with that realization in mind. It is time for Israel to remove the siege, which has not achieved its objective.

At this point, it is difficult to imagine that any agreement between Israel and Hamas could make the shift from talks and theory to practice. There are plenty of major obstacles along the way, with the biggest question of all being whether Hamas will be able to exert its authority over its own military wing.

But Israel has quite a few hurdles of its own. How can Prime Minister Benjamin Netanyahu get his fragile right-wing government to agree to a plan that perpetuates a terrorist group’s control of the Gaza Strip and even gives that entity a sea passage, via a port in Cyprus?

Whether the two sides ultimately reach an agreement or not, it is time for Abbas and other senior Palestinian officials to stop fooling themselves. The PA with Abbas at its helm will not return to Gaza. Hamas will not disarm its military just to bring back the very person it kicked out. Gaza and the West Bank have developed differently over the past few years, each following its own course. Furthermore, there were socioeconomic and cultural differences between Gaza and the West Bank even before the coup. Fatah activists who fled to the West Bank after Hamas seized power can still feel that today. As former residents of Gaza, they have never really managed to fit into life in the West Bank. Sometimes they feel like aliens or even outcasts in their own land.

The differences between Gaza, with its orientation toward Egypt, and the West Bank, with its orientation toward Jordan, have developed and exacerbated over the past few years, reaching a point of no return. Abbas needs to understand that. He has to learn from his past mistakes and focus on the future. He should forget about Gaza and focus on improving the lives of Palestinians living in the West Bank. An agreement between Israel and Hamas could actually restore Israelis' and Palestinians' faith in the negotiation process, and this in turn could advance Abbas’ interests too.