How Abbas' spite for Dahlan could reconcile Fatah, Hamas 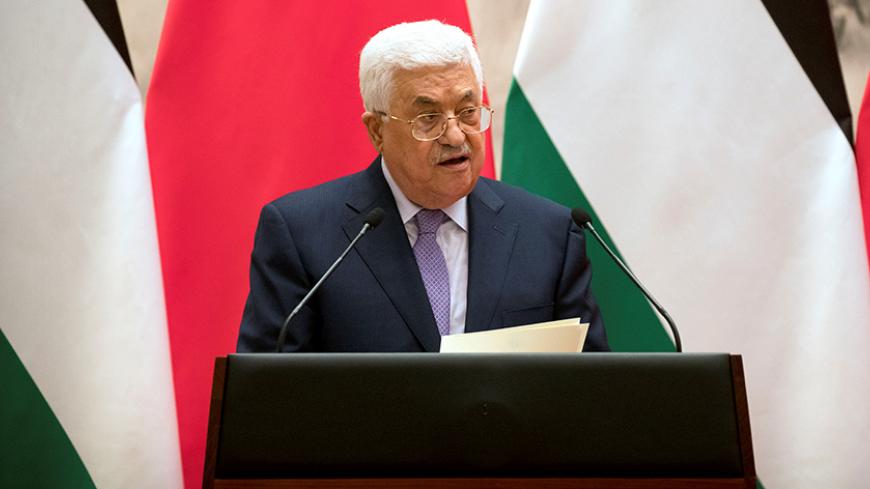 Palestinian President Mahmoud Abbas speaks during a signing ceremony at the Great Hall of the People in Beijing, China, July 18, 2017. - REUTERS/Mark Schiefelbein

Hamas and Fatah are closer than ever to a compromise that will lead to reconciliation after more than a decade of fighting, Al-Monitor has learned from senior officials in the Palestinian Authority.

On Aug. 1, a group of Hamas officials paid a visit to the office of President Mahmoud Abbas at the PA headquarters in Ramallah. Heading the delegation was Nasser al-Din al-Shaer, former deputy to Ismail Haniyeh, who was Hamas' prime minister in the Gaza Strip from 2006 to 2013 and now heads its political bureau. Shaer is considered the most pragmatic member of the movement in the Gaza Strip, while Fatah considers him a worthwhile negotiation partner. Unlike other Hamas members, he considers Palestinian national interests more important than the narrow interests of the movement. The official explanation provided by Abbas’ office for this surprising meeting is that the Hamas delegation wanted to congratulate the Palestinian president on defending Al-Aqsa Mosque.

The bloody conflict between the rival Palestinian groups began with the violent Hamas coup in 2007. Since then, all efforts to bring about reconciliation have failed.

Last week's meeting took place in the shadow of one of the biggest crises between Fatah and Hamas of the past few years. Three months ago, Abbas decided to separate Gaza from the West Bank. The impetus was a decision by Yahya Sinwar, who was elected in February as leader of Hamas in Gaza, to establish a Supreme Civil Council to handle municipal and administrative affairs there. Abbas considered the creation of this new council, which consists entirely of Hamas representatives, a challenge to the Palestinian national unity government that still governs Gaza, at least officially, and to his own position as president.

In response to its formation, he halted payments for fuel used to run the Gaza power station and suspended the salaries of PA staff living in Gaza and funds for local health facilities. Abbas had hoped that these measures would pressure Hamas to renege on the creation of the independent council. Instead, his bitter rival, former senior Fatah official Mohammed Dahlan, burst onto the scene to fill the vacuum.

Why would Abbas' office allow such a meeting to take place as the crisis between Fatah and Hamas reached a climax? One source close to Dahlan who agreed to speak to Al-Monitor on condition of anonymity said it was Abbas' reaction to learning that Dahlan was advancing a similar reconciliation initiative without involving him. As part of Dahlan's initiative, the two parties even exchanged documents containing an outline for national reconciliation between people torn between their leaders. While it is not at all clear whether Dahlan's efforts will pay off, Abbas’ fear of his political rival is stronger than all the other pressures on him over the past few years. That is why he was prepared to make such a dramatic move in favor of Hamas. One senior Palestinian source told Al-Monitor that the delegation headed by Shaer was coordinated with Haniyeh and Sinwar.

After the greetings and congratulations over his victorious defense of Al-Aqsa Mosque, Shaer informed Abbas that Hamas was prepared to discuss an equal division of seats on Gaza's new civil council. He suggested that half the representatives be Hamas members, and the other half Fatah representatives living in Gaza. The source said that Abbas did not reject the idea of cooperation on the council, even though it would make Prime Minister Rami Hamdallah's national unity government redundant.

On the other hand, Abbas is concerned that most Fatah members in Gaza identify with Dahlan and said that if the compromise goes forward, he would personally select Fatah's representatives, who would not necessarily be Fatah people living in the Strip. Furthermore, if the proposal is accepted, Abbas is expected to request that the council be made subordinate to the national unity government.

Should this cooperation work out, it will be the first step toward true reconciliation between Hamas and Fatah. It will differ from the national unity government, composed of people with no official organizational affiliation. The council will be the first time that senior members of both organizations sit together in a single governing body.

In that same meeting, Shaer proposed that Abbas pay his first visit to Gaza, 10 years after the coup. Such a visit would benefit both parties. For Abbas, it would be the first time feeling like he is still the Palestinian president who rules over all the territories that make up Palestine. For Hamas, it would ensure PA support, which would prevent its collapse and an ensuing humanitarian crisis. During this visit, there might even be a meeting between Abbas and Haniyeh. As head of Hamas' political bureau, Haniyeh leads the faction willing to forgo the movement's holdings in Gaza for the sake of Palestinian unity. Abbas has not yet responded to this proposal. While the reconciliation effort would result in the official return of Fatah to Gaza, it also implies PA recognition of Hamas' military and its role as the security force in Gaza.

After 10 years, the Palestinian president must decide whether he is finally ready to put an end to this internecine Palestinian conflict. Two recent developments could compel him to respond positively. The first is Dahlan, who is breathing down his neck within Fatah, and the second is Abbas' rumored decision to retire at the end of 2017. Senior Fatah members who spoke with Al-Monitor claim that on Jan. 1, 2018, he will hand over the reins of power. Abbas would rather not leave to his successor a divided Palestine, and he hopes with all his being that that heir won’t be Dahlan.