How deep is Dahlan involved in Israel-Hamas talks?

According to some sources, Palestinian President Mahmoud Abbas rejects the Israel-Hamas truce deal over the involvement and mediation of his archenemy Mohammed Dahlan. 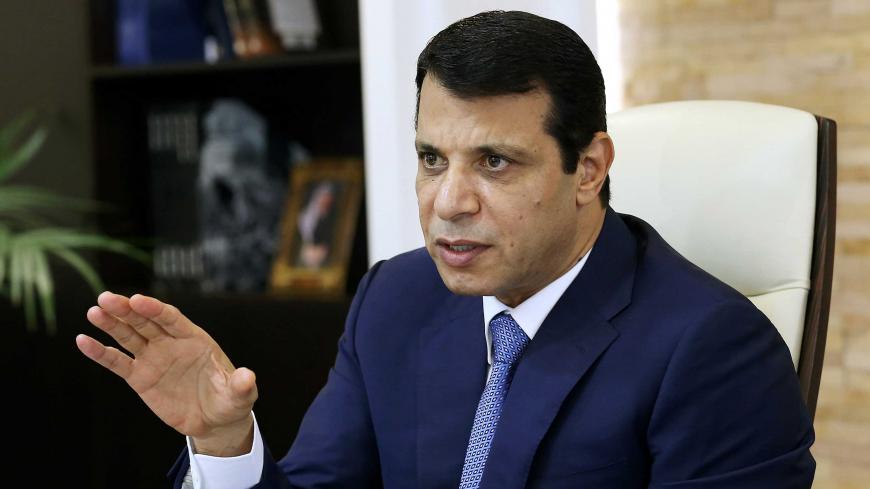 Barring any dramatic developments over the coming weekend, the agreement between Israel and Hamas is a fait accompli, and all that remains to be seen is when a formal announcement will be made. It may still take a few more days to hammer out certain issues that remain unresolved, such as how long the period of calm will last, when the bodies of Israeli soldiers Oron Shaul and Hadar Goldin will be returned, along with the Israeli citizens currently being held by Hamas, and whether all the rival Palestinian factions will be brought under “the umbrella of the agreement.”

On the evening of Aug. 16, Israel confirmed that the head of Egypt's intelligence services, Maj. Gen. Abbas Kamel, paid a visit to the country one day earlier for meetings with Prime Minister Benjamin Netanyahu and Director of the Shin Bet Nadav Argaman. Then he continued on to Ramallah. In an unusual move, Palestinian President Mahmoud Abbas’ office did not release any statement about the visit. The reason for this is clear. Not only is Abbas opposed to entering under that “umbrella,” he has actually been launching a fierce attack against the arrangement.

Kamel's visit to Ramallah and the delay by the Palestinian leadership in the West Bank of an official announcement that the new arrangement has gone into effect are taking place in the shadow of a meeting in Ramallah of the PLO’s Central Committee. Its discussions were scheduled to end on Aug. 16, but it has since been decided to extend them by one more day, to give Abbas a chance to respond publicly, before an audience, to an arrangement that he opposes so vehemently.

According to a Fatah source, Abbas wants to deliver a firm speech to the council’s members, attacking anyone who welcomes the arrangement, since he believes that it perpetuates internal divisions among the Palestinian people, strengthens Hamas rule in the Gaza Strip and turns the idea of two separate and distinct geographic entities for the Palestinian people into an established fact. In the long term, it also postpones the creation of the Palestinian state into the distant future, when the creation of such a state was the ultimate goal of the life work of Abbas.

In a speech he delivered to the members of the council on Aug. 15, Abbas reiterated that Hamas is not really interested in reconciliation, and that he will not budge as much as an inch from certain conditions that he considers essential: one armed force, one Palestinian Authority (PA) and one government.

Yet despite these non-negotiable conditions, it is also worth noting that Abbas had engaged in advanced talks, through Egyptian mediation, to make progress in the Palestinian reconciliation process. He was presented with various compromise proposals, such as graduated control over the security forces in the Gaza Strip. But when it seemed like a reconciliation agreement was within reach, and Hamas representatives were asked to go to Cairo as quickly as possible, Abbas finally rejected any understandings that were reached.

“It’s not a matter of principle, but rather a personal issue that prevented Abbas from agreeing to reconciliation and to being the final piece in the deal hammered out between Israel and Hamas,” a Gaza-based associate of former Fatah senior Mohammed Dahlan told Al-Monitor on condition of anonymity. He said the reason Abbas is so opposed to the agreement is that he discovered Dahlan is playing an active role in the emerging agreement from behind the scenes. “This absolutely infuriated him,” he added.

It is well-known that Abbas considers Dahlan to be his bitter enemy. He expelled him from the Fatah movement in 2011, after banishing him from the West Bank.

Today, most Dahlan supporters are based in the Gaza Strip. Those supporters, who fled to the West Bank during the 2007 Hamas coup in Gaza, have since returned there, claiming that they felt persecuted by the PA in the West Bank. Their return was made possible by the historic reconciliation between Hamas and Dahlan in 2017, and the fact that Dahlan served as a bridge in the reconciliation between Hamas and Egyptian President Abdel Fattah al-Sisi. Previously, Sisi had considered Hamas to be collaborating with Egypt’s own Muslim Brotherhood, which was outlawed by the current Egyptian government.

“Abbas did a U-turn and is unwilling to be part of the arrangement, despite Egyptian pressure, since he believes that the Egyptians are paving the way for Dahlan to replace him as the Palestinian leader in Ramallah,” the associate of Dahlan said. “All fault in perpetuating the division and separation of the Palestinian people lies with him [Abbas].”

According to the source, Abbas learned from Azzam al-Ahmad, his emissary to the talks in Egypt, that Kamel meets regularly with Dahlan. The advantage that Dahlan has is his direct connection with the head of Hamas in Gaza, Yahya Sinwar. They both grew up in the Gaza town of Khan Yunis, and during the 2017 electricity crisis in Gaza, brought on by sanctions that Abbas imposed on Hamas, the two men met in Cairo and reached understandings and agreements on how they could cooperate. This connection between Hamas and Dahlan has since become a well-known fact. Abbas long knew about it, but his concerns about Dahlan intensified as he heard more and more reports on the emerging arrangement and on Dahlan’s role in pushing it forward.

Dahlan’s supporters in Gaza, some of whom spoke to Al-Monitor, say that his most important mission now is raising money in the Gulf states. His skills and talents as a fundraiser there are well-known. Upon being expelled from the West Bank, Dahlan settled in Dubai and established close relationships with the leaders of the Gulf states. Then, the projects he initiated to develop infrastructures and to help weaker sectors of the population — young couples and the homeless in the refugee camps of the West Bank and Gaza — turned out to be top of the line.

“Dahlan has thousands of supporters and admirers who owe their lives to him,” another associate of Dahlan in Gaza told Al-Monitor on condition of anonymity. “He is proving his talents even more now.”

Al-Monitor was met with silence when it approached the office of Abbas for a response. A source in the Fatah movement, who is considered to be an opponent of Dahlan, claimed on condition of anonymity that there is no basis for anything that Dahlan’s people are saying. He said that they are simply looking for ways to praise their leader, even though he played no role in the “bad agreement being reached with Israel.” According to him, Abbas is absolutely opposed to the arrangement and to Palestinian reconciliation for all of the reasons he listed in his speech to the PLO’s Central Committee. He is unwilling to enter Gaza before he has assumed complete control over the local security apparatus and before Hamas accepts him wholeheartedly and without challenge as president of the Palestinian people.

Still, over one fact there is no argument. Dahlan has also developed a close friendship with Egypt’s president and with other top government officials there. Thus, it is only natural that he is taking part — even though perhaps not in a major capacity — in the emerging agreement between Hamas and Israel.