The latest vandalism of a Baghdad statue underlines the cultural and political strife dividing Iraqis. 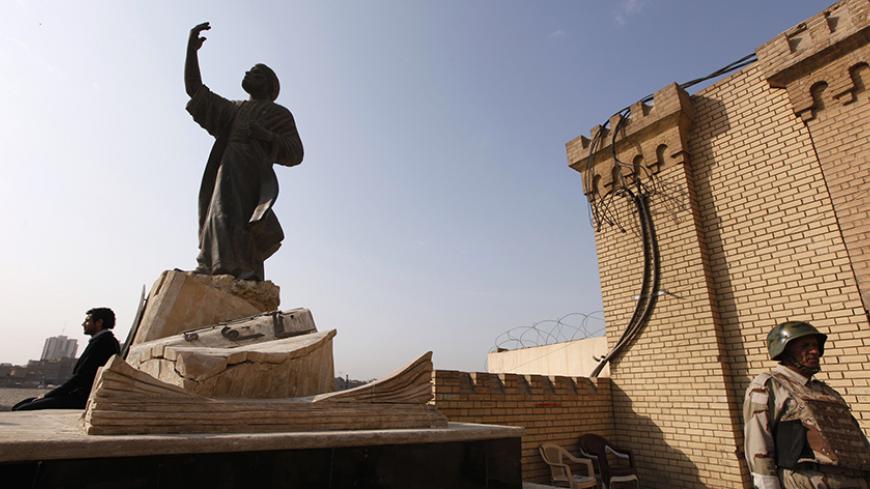 An Iraqi soldier stands guard below the statue of Al-Mutanabbi, a 10th-century poet and one of the towering figures of Arabic literature, on the banks of the Tigris River in Baghdad, Dec. 16, 2011. - REUTERS/Thaier al-Sudani

BAGHDAD — When the statue of the poet Abu Nuwas was vandalized on July 5, it sparked a new round of intense political and social conflict in Iraq between conservative forces represented by some political parties and religious currents and secular forces that reject religious and political currents' interference in citizens’ civil choices.

Vandalizing the statue hit a certain cultural and social nerve, as many of Iraq’s cultural elites believe there is a systematic plan to remove the cultural monuments and memorials for religious and political reasons after monuments began to be taken down in Baghdad and other Iraqi cities in 2003. Statues of the Iraqi soldiers who fought in the war with Iran were shattered in Basra on May 6, 2003.

Abu Nuwas lived in Baghdad and died in the year 814 CE. He is remembered as shameless and insolent, but also for the creativity, use of language and selection of topics in his innovative poetry. Islamists continue to regard Abu Nuwas as one of their top examples of immorality.

In 1972, Iraqi sculptor Ismail Fattah al-Turk made the bronze statue of Abu Nuwas holding a glass of wine on a 1.5-meter (4.9-foot) base, surrounded by bronze bas-relief that represents the events of the poet's life.

The identity of those who vandalized the statue is still unknown, and no governmental or nongovernmental party has claimed responsibility for this act. The Baghdad Secretariat quickly denied any connection to the incident, and perhaps in an attempt to remedy the criticism it faced for failing to protect the monument, said July 7 that it was working to rehabilitate and maintain the statue.

However, cleric Ali al-Husseini from Babylon told Al-Monitor that he is “surprised by the hype regarding the statue of the poet holding the glass of wine in his hand.” Although he does not call for the demolition of the statue — as, according to him, any such decision should be made by the municipal authorities — he believes “Its presence was not appropriate in a Muslim society in Iraq, because it provokes Muslims by manifesting drinking alcohol, which is forbidden in Islam.”

Husseini’s opinion is shared by many conservatives who are keen to apply the teachings of religion, prompting a great number of secular intellectuals — such as poet Hussein al-Qassed and writer Hamad al-Maliki — to accuse conservative parties of being behind the damage to the statue and seeking to remove it.

Poet and writer Hadi al-Husseini told Al-Monitor, “This powerful conservative force is seeking to eliminate a lot of the monuments and statues in Baghdad because they do not fit with its ideology.” Although he refused to identify those he described as “conservative” — as did every person who spoke to Al-Monitor in this regard — he did mention two incidents: the 2012 demolition of the statue of Baghdad founder Abu Ja’far al-Mansur and the theft of the statue of former Iraqi Prime Minister Abdul Mohsen al-Sadoun in July 2003.

Meanwhile, Abbas Abboud, a journalist with the Iraqi Media Network and researcher in cultural affairs, told Al-Monitor that the vandalism of the statue of Abu Nuwas was not by chance, as he believes it “represents the crux of the conflict between the two cultural trends in Iraq." He said, "The first trend is religious, divided ideologically and politically, and seeks to compensate for the political crisis that it’s going through. It has the largest and most influential audience. The second trend is secular, with its leftist, liberal and nationalist components, and perhaps Baathist as well, which suffers alienation, isolation and weak impact on the public.”

Amid the controversy surrounding the vandalism, online cultural forums and social networking sites buzzed with news of an official attempt by the Iraqi government to remove the Al-Shaheed monument, which commemorates the martyrs of the Iran-Iraq War and is considered a symbol of the era of former Iraqi President Saddam Hussein. This news prompted Iraqi poet and art critic Shaker al-Aibi to send an open letter July 9 to Prime Minister Haider al-Abadi, asking him to prevent the removal of the monument.

In a July 9 press statement by Ali al-Adeeb, the head of the State of Law Coalition, the government denied having a plan to remove the monument. Political analyst Jassem al-Musawi told Al-Monitor, “The current events are part of a media battle between those trying to turn Iraq into a theocracy and the forces seeking to build a democratic state not under the hegemony of any political or religious party.”

In an interview with Al-Monitor, writer and journalist Salam Sarhan made the same point, saying he considered the removal of certain cultural attractions “the result of mixing religion with politics.” He called for “adopting a project of a civil state in which all manifestations of cultural oppression recede.”

Since 2003, reports of the demolition of monuments and statues in Baghdad have dotted the news.

Iraqi and Arab media outlets reported in 2010 on authorities’ intention to remove the Arc de Triomphe monument in Baghdad because it is one of the symbols of Hussein’s regime, but that news turned out to be false. However, the authorities did remove a number of monuments and statues, such as the Al-Nidaa monument designed by plastic surgeon Ala Bashir in memory of the occupation of Kuwait, although it did not include any clear symbols of the occupation of Kuwait. The authorities also removed the Al-Masira monument by late sculptor Khalid al-Rahhal, whose great creation “The Unknown Soldier” still stands in Baghdad, as well as statues in Baghdad of the officers who participated in the 1941 coup led by Rashid Ali al-Kilani and a collection of statues of military figures who died in the eight-year war with Iran.

Civil activist Salameh al-Salhi compares efforts to remove the statues and monuments of the province by political groups to the terrorist acts carried out by the Islamic State. These she described to Al-Monitor as “the brutal agendas of hate toward beauty and art led by this terrorist group.”

In this context, it is possible that the damage done to the statue of Abu Nuwas is a move to test the waters of reactions before the implementation of plans to remove other cultural landmarks.