In an increasingly divided Iraq, disputes have broken out regarding the use of photography and symbolism that reinforces sectarian, rather than national, affiliations. 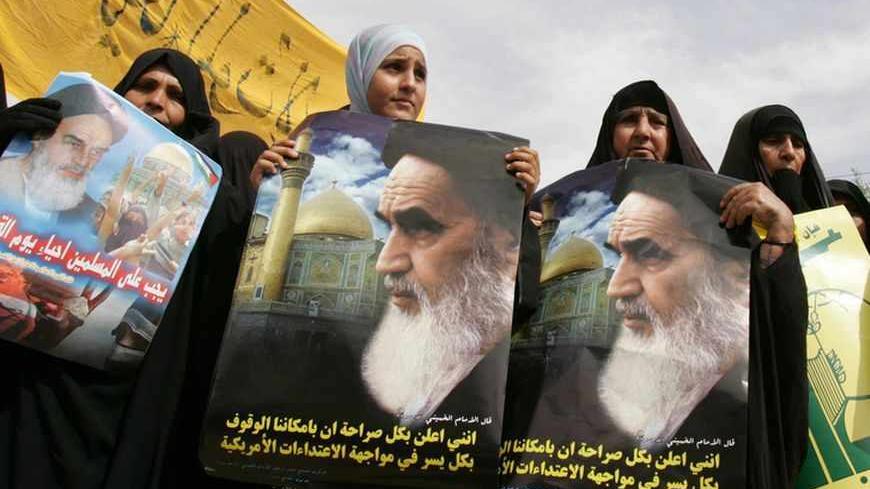 Women hold posters of Shiite Iranian cleric Ayatollah Ruhollah Khomeini to commemorate the al-Quds (Jerusalem) Day and to show support for the Palestinians, during a rally in Basra, 550 km (340 miles) south of Baghdad, Oct. 20, 2006. - REUTERS/Atef Hassan

Iraq's ongoing conflicts are often linked to religious identities. Given the religious nature of these conflicts, the importance of icons, symbols and photographs are certain to emerge more prominently than at other times. Each of the conflicting parties tries to preserve its identity by creating a range of signs — particularly photographs — and by attacking the symbols of other parties. In this climate, a photo of a religious leader or political figure will no longer be just a photo. Rather, it will reflect the identity of the entire sect or party. It is within this context that one can understand the sharp conflict between Iraqi members of parliament over raising photographs of Ayatollah Ruhollah Khomeini and Ayatollah Khamenei in the streets of Baghdad.

Hermeneutically, these photographs represent the conflict between religious identities in Iraq. When a Shiite group raises such photographs to protest against the country's mounting challenges, in the midst of sectarian conflict, Arab Sunnis see it as a declaration of the fall of Arabism in Iraq and the revocation of the project of an independent Iraq. The verbal and physical altercation that took place in the Iraqi parliament in August 2013 over photographs of Iranian leaders displayed in Baghdad was not a simple political dispute between two blocs that have different political orientations. Instead, it reflects the standing conflict between religious identities in the country.

Iraqi groups try to exploit the public sphere to establish a presence and identity that distinguishes it from other parties. Therefore, neither side cares about common symbols that do not polarize. They focus instead on what provokes and makes others surrender before their symbolic authority. In this context, one can understand why some Shiites have chosen the photographs of Khomeini and Khamenei instead of Iraqi Shiite cleric Ali al-Sistani, and why some Sunnis opted for photographs of former President Saddam Hussein and Turkish Prime Minister Recep Tayyip Erdogan instead of moderate Sunni Iraqi figures.

The series of conflicts over icons and symbols between the conflicting identities in Iraq is not a recent development. The dispute has reared its head on several occasions, beginning with whether to consider April 9, 2003, a day of occupation or liberation in Iraq. The dispute then continued when selecting the new Iraqi flag. While some parties felt that their identity was being overlooked, others felt theirs was being undermined by the use of icons that differ from their own.

Iraqis continue to disagree over the process designed to cleanse the streets of any symbols that go back to before 2003. In 2008, some parties within the Iraqi government attempted to remove the Victory Arch in Baghdad, by characterizing the monument as a sign of the wars led by Saddam. This angered some groups of the Iraqi public, which ultimately pressured US forces to prevent its demolition.

Moreover, the statue of Abdullah al-Luaibi, an Iraqi military pilot, was removed from the National Theater Square in Baghdad, which angered some Iraqis. Luaibi sacrificed himself in a suicide attack during the Iran-Iraq War, to prevent an Iranian aircraft from completing its offensive on Iraqi territory.

In this context, photographs of Iranian leaders posted in Iraq are understood to be part of Iranian control over Iraq, and not just mere photographs of Shiite religious figures, as Ibrahim al-Jaafari, head of the National Iraqi Alliance, said. Before they were raised in Baghdad, a large number of these photographs were spread throughout Basra, the third largest city in Iraq after Baghdad and Mosul. This drew a great deal of criticism from residents of the city.

Iraqi activists have followed the news of the dispute over these photographs in the Iraqi parliament with great enthusiasm. Iraqi writer Rasheed al-Khayoun stated that Khomeini and Khamenei are both political symbols for Iran and that their photographs cannot be raised in the Iraqi public sphere. Fakhri Karim, chairman of the Al-Mada Foundation, said that although ties with Iran are historic and strategic, raising photographs of Iranian leaders in Iraq is contrary to national interests. The news of this event resonated globally and regionally, even receiving coverage in international and Iranian newspapers.

These events reflect the government’s weakness in protecting the public sphere and making it a safe place where every citizen feels that he belongs. It is natural that the management of the public sphere becomes more complicated and exploited by those in power in different ways, where the prime minister openly expresses his principles and religious and partisan positions in his speeches and dialogues.