A group of Iraqi poets have organized an anti-violence convoy that will go through several Iraqi provinces, where intellectuals will read poetry in public spaces to promote peace and unity in the country. 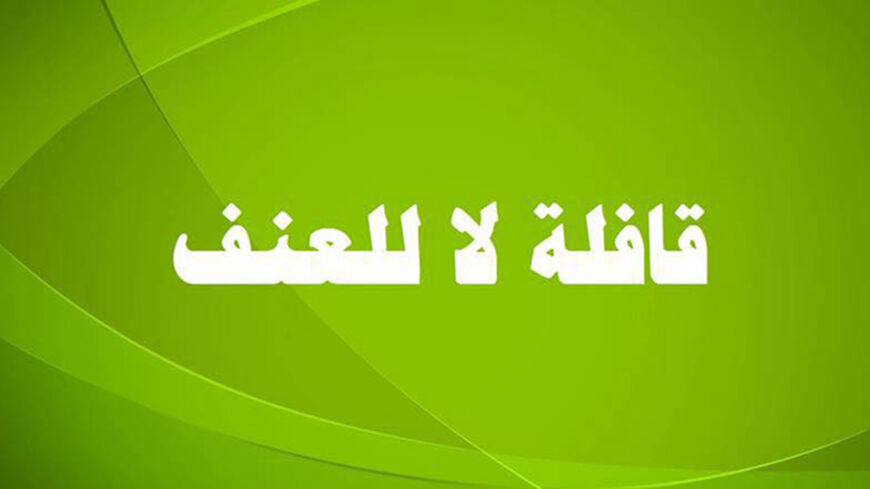 A banner on the Facebook page of Nabil al-Jabiri, a member of the preparatory committee of the Iraqi Poets’ Anti-Violence Convoy, spells out the group’s name in Arabic, Oct. 10, 2014. - Facebook/Nabil Al-Jabiri

BAGHDAD — On Oct. 11, three poets from Karbala province will initiate the “Iraqi Poets’ Anti-Violence Convoy,” which will take off from the southern province of Basra and cross through nine other provinces. Members of the convoy will recite poetry in public squares near historic landmarks. According to the organizers of the convoy, the initiative aims to help eliminate the rampant violence in the country.

Iraqi activists are constantly working to hold cultural and civil events to promote peaceful coexistence between groups and encourage the culture of moderation instead of the hard-line religious tone that has resounded in Iraqi cities.

“The idea came about while we, a group of poets who believe in life, were thinking about the need for coexistence and tolerance in Iraq. This initiative aims to turn Iraq into a country of peace and diversity, where people are treated as beings with sacred value who must be preserved and safeguarded against all forms of violence,” Nabil Nehme al-Jabiri, a member of the preparatory committee of the anti-violence convoy, told Al-Monitor.

“The convoy will carry a significant humanitarian message, whose motto is: no to violence,” he said.

“Participants will recite poetry in public squares and in front of passersby but will not perform in halls. They will make poetry come alive, as poetry is first and foremost a way of being. Therefore, intellectuals would play their role as people who interact with their surroundings,” Jabiri continued.

Since the beginning of the year, Iraq has experienced a sharp rise in the level of violence, which was further exacerbated when the Islamic State (IS) captured entire cities and provinces in a campaign that started on June 10. This has led to the aggravation of the security situation and an increase in killings, which amounted to 12,976 as of October.

Jabiri said, “We posted the event on Facebook and the convoy soon turned into a global project.” He said they received “solidarity statements from cultural and intellectual figures and institutions from Europe and the Arab world.”

The European Culture Forum in Belgium expressed solidarity with the anti-violence convoy and declared that it would start a similar activity at the same time, bearing the same name and motto. Moreover, the Iraqi Cultural Center in Tunisia, in addition to groups of Tunisian journalists and literary salons in Tunisia, Saudi Arabia and Algeria, showed solidarity with the convoy, according to the organizers.

“The rampant violence in the world has turned into a phenomenon with well-defined features, which necessitates a counterculture. It is our responsibility to take to the street and take on our role to build a society free of violence and extremism. The convoy started with poetry, but it will end up affecting individuals and be part of their life. We hope we can bring about a change through the words of love and sincere behavior,” Jabiri said.

Hussein al-Qassed, a poet, academic and member of the Central Council of the Iraqi National Writers Union, said, “The convoy will carry a message of love for everyone and is open for anyone to join in all Iraqi cities. It will take off on Oct. 11 near the statue of Iraqi poet Badr Shakir al-Sayyab and will travel across the cities of Nasiriyah, Samawah, Diwaniyah, Najaf, Karbala, Hillah and finally Baghdad on Oct. 17.”

Qassed told Al-Monitor, “The anti-violence convoy was an initiative based on personal efforts and is not affiliated with any political or cultural party.”

It appears that activists who are promoting nonviolence in a country rife with violent acts are not being supported by the government or parliamentary institutions, according to Kassem al-Shamari, a member of the preparatory committee for the convoy.

Shamari said, “The convoy received lukewarm support from the General Union of Writers and Authors in Iraq,” stressing that “the solidarity and support on the part of Arab cultural circles was more than we expected it.”

“We did not demand anything and we do not have any personal interests in this initiative. We are working in the name of Iraq only. The convoy goes beyond being a mere cultural event, it is the conscience of the nation,” he added.

Jabiri also said that the “convoy will tour safe cities and will not go to areas controlled by dark forces, because first it would be difficult to reach them, and [we] will not grant these cities legitimacy as they are governed by shedders of blood and extremists.”

Five Iraqi provinces are currently suffering from heavy fighting between the Iraqi army and IS.

“We will call upon displaced poets outside these provinces to join our convoy when it reaches the capital,” he said.

The convoy intends to cross hot areas “after being liberated from extremists,” Qassed said. “We will shout among our people: no to violence; yes to one united Iraq.”