The House of Poetry, established by several Iraqi poets in 2009, brings modern poetry to the people through posters and graffiti. 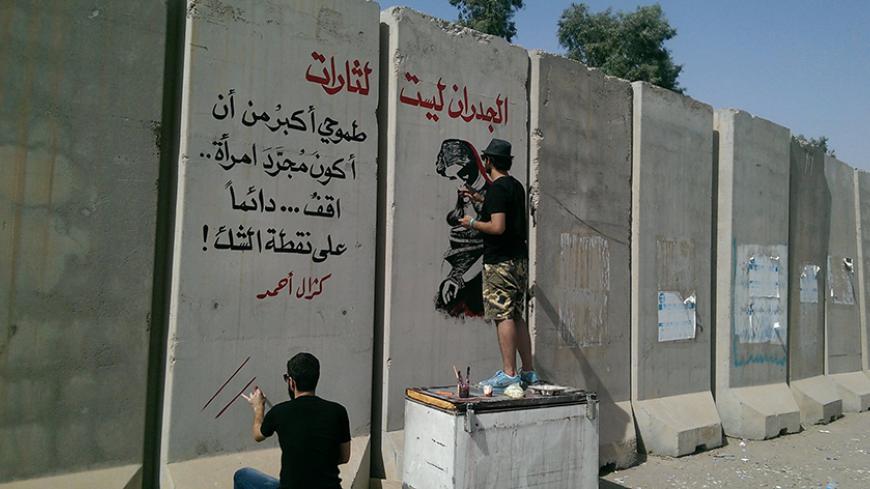 Graffiti artists paint a wall as part of the "The Walls are not for the Clash of Clans" campaign in this image posted on Oct. 2, 2016. - Facebook/The House of Iraqi Poetry

A cultural organization formed by Iraqi poets is reaching young Iraqis in university campuses, cafes and the streets. The director of the House of Iraqi Poetry, Hossam al-Saray, told Al-Monitor that over the last 12 months his organization has set up a series of campus and street events to promote social progress and resistance to archaic customs through the work of contemporary poets.

The project started a year ago at several university campuses to expose students to Iraqi poets such as Sargon Boulus, Jean Dammu and Siham Jabbar. Their humanistic style, said Saray, contrasts sharply with folk poetry, which often presents sectarian views.

Various graphic designers also volunteered to make posters and flyers for the House of Iraqi Poetry’s project to put up poems in the streets, schools, cafes and other public places, calling for resistance to some outdated customs in Iraq. The poster campaign, called “The Walls are not for the Clash of Clans,” turned the tribes and clans' practice of writing threats to one another on its head, employing art to promote unity and progress instead, according to Saray. He said that the message behind the campaign is that tribal values and clashes lead Iraqi society backward.

The House of Iraqi Poetry’s work has moral dimensions as well. It aims to change Iraqi society and culture, especially in Baghdad. For example, the group honored the 2016 Karrada bombing victims with poetry about the disaster. As part of a project called “An Act of Loyalty to Karrada,” they hung posters in the Department of Forensic Medicine, where the bodies of the victims were kept, as well as in nearby streets. Saray said, “We were trying to use culture and poetry to express a moral position, in solidarity with the victims and their parents.”

The House of Iraqi Poetry, founded by Iraqi poets in 2009, is always changing and holds periodic elections to its administrative body. In the early days, it organized events for Iraq's elite cultural circles, but over the past couple of years, it has began to target ordinary people to introduce them to the richness and creativity of Iraqi poetry.

In Iraq, there are three main streams of poetry: One is folk poetry, known as the poetry of the uneducated whose tradition dates back centuries. The folk poetry tradition has experienced a resurgence and is often used by Iraqi political parties who pay poets to write material supporting them. Another is classical poetry, which is written very formally and in rhyming verse. The third is Iraq's modern poetry, whose accessible prose the organization is using to reach the people.

“This form of writing is the best suited to convey our message to the community,” said Saray, adding, “With it, we confront the classical poets who try to raise their voices above our beautiful words, with which we call on the audience to truly contemplate their situation."

Over the past year, the House of Iraqi Poetry has received praise in the press and on social media. “At first, we were concerned about how people might react, but the immediate support our initiative found urged us to continue with our work. Ordinary people started sharing pictures of our flyers online, encouraging us,” said Saray.

He made it clear that the House of Iraqi Poetry has received no support from the government, enabling the organization to maintain its independence. On the other hand, he said that some of the group's initiatives have faced obstacles for that reason. “Bureaucracy in several official institutions sometimes prevents the House of Iraqi Poetry from hanging posters,” he said.

The posters themselves are modern, designed simply in contrast to the ornate classical style. Saray explained, “One of our aims is to convey our message using good design along with the content in our posters, in contrast to an environment of backwardness, in which both political parties and governmental authorities do not even know how to create attractive and impactful posters.”

Saray added that many passers-by express suspicion that influential people or parties are behind the House of Iraqi Poetry and wonder at the hidden motives of the project. “This doubt on society’s part is one of the consequences of the distortion created by the current political elite in Iraq,” he said.

Today, the House of Iraqi Poetry is working on new initiatives outside of Baghdad. “We plan to run similar projects in other provinces, as part of our organization’s intent to reach everyone in Iraq,” said Saray.

For the poets involved, the House of Iraqi Poetry's projects are a hopeful sign that despite its misuse in spreading sectarianism and hatred, Iraqi poetry can also promote peace, social solidarity and inclusivity. To them, it means everything that institutions with so little funding can create such beauty in the midst of the numerous crises plaguing the Iraqi community.