Some Iraqi intellectuals say the the spread of folk poems butchers the classic Arabic language and serve the interests of political parties. 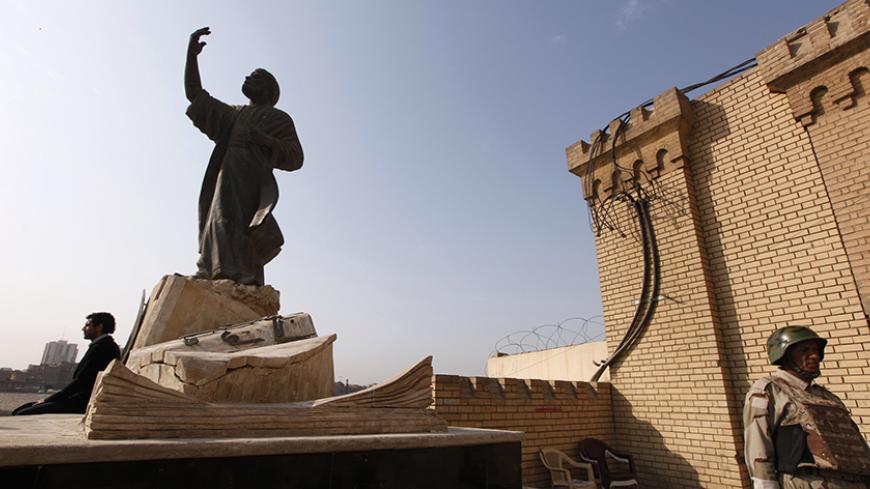 An Iraqi soldier stands guard below the Statue of Mutanabbi, a 10th century poet and one of the towering figures of Arabic literature, on the banks of the Tigris River in Baghdad, Dec. 16, 2011. - REUTERS/Thaier al-Sudani

Many Iraqis recite folk poetry, which is written in colloquial Arabic, stating support for the Popular Mobilization Units and for the fight against the Islamic State. These poems can be found on satellite TV channels, social networking sites and Iraqi radio stations. The widespread phenomenon in Iraqi society has outweighed other forms of creativity and arts such as poetry in classical Arabic and drawing.

“Some people recite folk poetry for money, while others think of pursuing careers as poets instead of becoming doctors or engineers for instance,” folk poet Haidar al-Shamari told Al-Monitor.

Arabic teacher Kazim Hasan told Al-Monitor, “Politicized folk poems have overridden classical poetry that does not stand a chance against the sweeping wave of colloquial poems.”

Folk poems have always reflected social and political events in Iraq. Many poets excelled in this type of poetry and have been known for their expressive recital.

However, folk poetry today, according to writer and critic Ali Hassan al-Fawaz, “has become a phenomenon blown out of proportion, but it is not something new. The regime of former Iraqi President Saddam Hussein, which was ousted in 2003, had used this kind of poetry to spread the culture of war.”

He said, “There is lack of editing and reviewing of texts as well as technical standards to write poems, which has a significant history in popular culture through important poets such as Al-Haj Zayer and Mullah Abboud al-Karkhi.”

Fawaz said, “Poetry today serves as some sort of political and cultural tool, which undermines its artistic value and its message to develop popular consciousness that would enhance the aesthetic and intellectual vision in the face of malice, apostasy and terrorism.”

Social and folklore researcher Rahim Ghaleb told Al-Monitor, “Many of those who support and recite this kind of poetry are illiterate or have limited cultural knowledge, which is reflected in their poetry output.”

“Unemployment and the lack of willingness to be educated are the main aspects of ignorance in society," Ghaleb said. “The number of folk poets has exponentially increased since 2003. The unemployed who have failed in school turned to this kind of poetry as a career to earn fame and money. This is the case of most folk poets. However, this does not mean that there are no university graduates or employees engaged in this type of poetry, but again they are few.”

He said Saddam's regime considered folk poets as an important tool to disseminate its ideologies and to urge people to fight in the Iran-Iraq War (1980-88). The regime had organized dozens of poetry festivals, which made many poets famous through TV appearances. Among these was poet Hadi Okasha, who was killed by armed groups affiliated with Iran in 1991 because of a poem he had written against the Islamic Republic during the war.

Political forces in Iraq have been investing in the youth’s interest in this type of creative art, by organizing festivals and celebrations, while satellite channels sought to increase viewership by dedicating programs to folk poets.

In an interview with Al-Monitor, poet Jinan Al-Saegh said, “The phenomenon of folk poems has recently spread. While some considered it being purely literary, others saw it as destructive of the Arabic language given the local colloquial dialect used in it.”

“No matter our differences on folk poetry. It remains a beautiful creative phenomenon through which people can express themselves and talk about what is going on in their country,” she said.

The controversy about folk poetry reveals its influential role in society and its ability to document places and times of certain incidents and events in the country.

Writer and journalist Nasser al-Hajjaj told Al-Monitor, “Historical reasons are behind the widespread phenomenon of folk poetry. This humanitarian and literary production has been very popular and common since ancient times in Iraq, as Arab warriors used to recite poetry on their way to battle. They also used to recite and write poems to celebrate weddings and births, among other similar occasions.”

He added, “This is not to mention the funerals held in a husseiniyah [a Shiite religious hall] that relied on poetry to voice messages and recite stories. Thus, poems have become a traded commodity.”

Regarding the political investment in these poems, Hajjaj said, “Saddam’s regime had encouraged folk poets to write poems during battles for huge amounts of money. After 2003, poets continued to praise politicians and war to this day.”

Poet Shaza Askar told Al-Monitor, “The large number of folk poets in Iraq is not something new or strange, as Iraq is home to poetry, whether colloquial or classical.”

“The government policies affect this phenomenon, which flourishes or fades accordingly. When governors or parties need poets as a means of media praise, their number increases and vice versa,” she said.

On Facebook and Twitter, Iraqis compete in writing poetry on pages dedicated to this kind of creativity.

Writer and poet Ali Srhan told Al-Monitor, “Colloquial Arabic is used in folk poems, which is the language used among people and not in the books of classical Arabic. This has adversely affected reading and culture especially in the absence of theater and music.”

He added, “Through this kind of poetry, people are able to express themselves according to their psychological and social needs, which is why it has become so popular especially since prose is usually ambiguous and is not very popular among novices.”

Political competition in Iraq has prompted folk poets to praise ruling political parties, while others express their rejection of corruption and terrorism through poetry. Religious feelings are addressed in folk poetry, too, as many recite religious poems in colloquial Arabic.