Netanyahu rejects US offer of military support; IDF says not so fast

Israeli Prime Minister Benjamin Netanyahu rejects again the US offer for a security-compensation package, unlike the IDF that is taking the agreement as a done deal and wishes to cooperate closely with the United States on security follow-up. 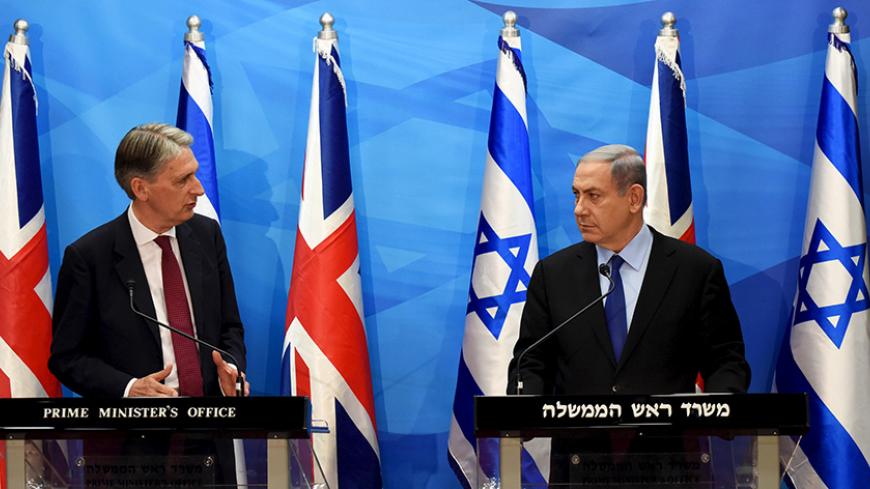 A particularly awkward moment occurred when Isaac Herzog and Tzipi Livni met July 16 with British Foreign Secretary Philip Hammond on his brief visit to Israel. Herzog and Livni, leaders of the leading opposition faction in the Knesset, the Zionist Camp, bombarded Hammond with a series of complaints and questions regarding the various cracks they believe exist in the agreement between Iran and world powers, and the deal's many shortcomings.

Hammond provided them with detailed answers. Then the name of Gen. Qasem Soleimani popped up. Soleimani heads the Quds Force of the Iranian Revolutionary Guard Corps, which operates outside Iran in order to “spread the word” of the Islamic Revolution. Israel views the Quds Force as Iran’s main tool for fomenting terror. Herzog asked how it was possible that the world powers are taking Soleimani off the sanctions list, referring to his inclusion on a list of 32 top Iranians freed of international curbs under the terms of the agreement. Inclusion of Soleimani's name on the list appended to the agreement stunned many in Israel.

Hammond said that it was not the same Soleimani. Herzog and Livni couldn’t believe their ears. Didn't the British foreign secretary know that the agreement he signed with Iran includes the lifting of sanctions from the commander of the Quds Force? At the Vienna news conference that followed the signing of the nuclear agreement July 14, Secretary of State John Kerry ignored the same question, while Iranian Foreign Minister Mohammad Javad Zarif denied it was the same Soleimani.

According to Herzog, a question put to the Americans revealed that it is indeed the same Soleimani. US officials argued in their defense that while Soleimani would be taken off an international sanctions list, his name remains on a US sanctions list, and on all other US blacklists. Israel, however, could not find any solace in this clarification. For Israel, the free pass granted to Iran’s top terrorism fomenter symbolizes, more than anything else, the naivete of the historic agreement between Iran and the world powers, and the danger it poses.

Hammond visited Israel a day after he said, in front of the cameras, that he assumed that Israel “doesn’t want any deal with Iran” and that “Israel wants a permanent state of standoff.” His joint news conference with Prime Minister Benjamin Netanyahu turned into a quasi-polite duel of questions and answers that illustrated, despite the smiles and fake gentlemanliness, the extent of the tension between the sides. Israel finds itself, along with the leadership of the US Republican Party, facing the entire world. In Hammond’s defense it should be said that he walked fearlessly into the lion’s den and answered Netanyahu’s public snipes with some of his own in front of the cameras. The two promised to continue their argument in private, and so they did.

The story initially reported by Al-Monitor May 12, regarding Israel’s refusal to enter into talks with the United States over “a strategic compensation and coordination package” came out elsewhere this week and turned into the talk of the day in Washington and Jerusalem. US National Security Adviser Susan Rice confirmed the story and noted that the Americans proposed the idea to Jerusalem a few weeks ago and were rebuffed. A detailed follow-up was published July 15 in Israeli daily Haaretz. After the initial Israeli refusal to discuss the matter, the offer was made this week once again by none other than US President Barack Obama in a tense phone conversation with Netanyahu following the signing of the agreement in Vienna. Such a situation has never arisen between these two veteran allies.

Many in Israel’s defense establishment think Israel should accept the US offer, call a halt to its stubborn and hopeless public fight with Obama and start preparing for “the day after.” The prevailing assessment in the Israel Defense Forces (IDF) and other security agencies in Israel is that the nuclear agreement in itself is not terrible and that it does, in fact, defer Iran’s nuclearization for 10 or 15 years, at least.

The trouble with the agreement lies in its other elements, and especially in the fact that it turns Iran into part of the solution rather than part of the problem. Some of the billions of dollars that will be funneled to Iran, said a senior military official talking on condition of anonymity, will find their way directly into Iran’s terrorist tentacles. According to the official, in the past decade, Iran has gradually cut its annual support for Hezbollah. Over the past five years that support was reduced annually by 10-15%. The official said that now billions will start flowing back into the arms of Iran’s global terrorists, with one significant difference: It will all be legitimate. In fact, Iran has been given a license to kill. The IDF believes that the cost of this decision will be borne by US former allies in the region and ultimately by Israel itself.

Given this state of affairs, the IDF would be glad to move the dispute with the United Sates to a more practical level and translate it into increased US aid, and strategic cooperation and understanding. In view of Netanyahu's insistence not to negotiate compensations with the United States, the IDF has started discreetly discussing the possibilities and laying the groundwork.

A senior defense official told Al-Monitor on condition of anonymity, following a closed security debate on the issue, “There’s lots that can be done in these areas, starting from increased annual military aid for a decade, along with lifting the freeze on weapons systems that Israel has yet to receive, anchoring and deepening the intelligence cooperation, and ratification of the sweeping US support of Israel on the diplomatic front.”

The defense establishment also thinks Israel should reach a series of coordinations and understandings with the Americans about the future, and especially over a long and detailed list of “what if” scenarios. In light of the new situation many questions have arisen: How will an Iranian violation of the final agreement be defined? What will Israel be able to do in such a case? Under what circumstances could Israel act in self-defense?

At this stage, as previously mentioned, Netanyahu won’t hear of such contacts. Behind closed doors the prime minister says he has no intention of taking a payoff in return for this agreement, and that there’s no compensation — in money or kind — that can make up for turning Iran into a nuclear threshold state. Netanyahu scornfully rejects the criticism directed at him in the Israeli political arena and argues that Israel was very instrumental in the negotiations, in the imposition of sanctions and in bringing the Iranian nuclear issue to the top of the international agenda. He says that he does not regret a single stance or activity he undertook in recent months.

Undersecretary of State Wendy Sherman, the US administration’s top representative in the nuclear negotiations, in fact backed Netanyahu’s claims when she said July 16 in a briefing for Israeli reporters that Israel’s help during the negotiations was crucial to its success. Sherman was referring mainly to the Israeli experts who helped reach the parts of the agreement pertaining to the heavy water reactor in Arak and the shutdown of the plutonic Iranian pathway to a bomb. Netanyahu was unimpressed with her compliments. He is now preparing his final defense lines in the battle with Capitol Hill.