For many years, Israel's ultra-Orthodox politicians preferred to be nominated deputy ministers and not ministers, shrugging off official responsibility for a Jewish state run differently than their understanding of Jewish-religious rules. 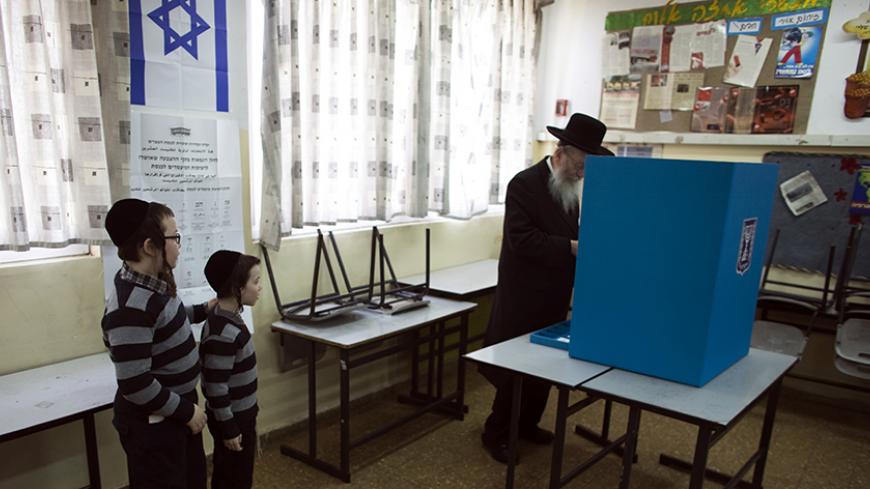 Israeli parliament member Yaakov Litzman stands at a voting booth as he casts his ballot at a polling station in Jerusalem, March 17, 2015. - REUTERS/Ronen Zvulun

Israel witnessed a political uproar last week following a debate of a special five-judge panel in the High Court of Justice on July 7. It appeared from the debate that the court would not accept that Prime Minister Benjamin Netanyahu also serves as a minister of the offices of foreign affairs, health, communications and regional cooperation.

The petition to the High Court was submitted by Yesh Atid, after Knesset member Yaakov Litzman, the chairman of Yahadut HaTorah, was appointed deputy minister of health “with the status of minister.” Aside from Litzman, two other deputy ministers serve in the government without a minister above them: Deputy Minister of Communications Ofir Akunis and Deputy Minister of Foreign Affairs Tzipi Hotovely. But Yesh Atid’s petition was targeted specifically at the nomination of Litzman, arguing that he is the only one serving as deputy minister and acting as minister.

According to the chairman of Yesh Atid, Yair Lapid, one of the reasons for the petition is the ideology behind the blanket refusal of the Ashkenazi (of Eastern European origin) ultra-Orthodox politicians of Yahadut HaTorah to serve as ministers in a Zionist government.

“It is not possible that someone who would serve as the head of the Ministry of Health would not swear loyalty to the State of Israel and its laws, and doesn’t have authority to run the ministry. The citizens of Israel deserve full-time ministers,” Lapid wrote on his Facebook page.

Knesset member Lapid touched on a sensitive issue. Since the founding of the State of Israel — aside from the case of Knesset member Yitzhak Meir Levin, who served as the minister of welfare in the first two governments of Israel (1948-52) — the Ashkenazi ultra-Orthodox refuse to take on the role of minister. From their point of view, a minister takes ministerial responsibility for the actions of the government, which sometimes acts in ways that are in their view opposed to the values of religious law and their ideology, such as the violation of the Shabbat (Saturday trading), questions of religious conversion and its authorization process, and so on.

Sources in Yahadut HaTorah who spoke on condition of anonymity told Al-Monitor, “The policy of the party is not to deal with issues of foreign affairs and security, but mostly with social issues and welfare, religion and state, and values and tradition. There are topics that we wouldn’t want to decide on, as representatives of a Torah-adherent public that follows the commandments, such as going to war or killing civilians, since our public isn’t sent to battle and officially doesn’t serve in the army.”

This claim, however, does not fit with what Litzman says himself. In an interview in February with The Marker, he complained that the ultra-Orthodox members of Knesset are not asked to weigh in on various issues on the government’s agenda, such as the prime minister’s speech before the US Congress on March 3. But this issue goes beyond the fields of “social issues and welfare, religion and state, and values and tradition.”

The same sources from Yahadut HaTorah also reject Lapid’s claims regarding their refusal to swear loyalty to the State of Israel and clarify, “Of course we have no problem recognizing the state. The swearing-in of a deputy minister to the Knesset is the same as that of a minister.”

So why do the Ashkenazi ultra-Orthodox parties not have any members as ministers in the Israeli government?

“The ultra-Orthodox want to have their cake and eat it,” Yossi Elituv, editor of the ultra-Orthodox weekly Mishpacha and a veteran political analyst, told Al-Monitor. “In recent years they’ve learned the advantages of political power and they seek to have influence, but on the other hand, there’s a problem with such significant identification with the government. There’s an old understanding according to which all political action is only [permitted] to protect the public, and the status of minister is seen as unnecessary authority that exceeds the bounds of traditional lobbying,” he said.

According to Elituv, the relationship of the ultra-Orthodox to the government has been changing, and they are gradually integrating and becoming a part of it. He said, “There’s change all the time. Today the ultra-Orthodox are more and more involved in Israeli society, and in an interesting way it actually starts at the top, through politics. Knesset member Moshe Gafni [Yahadut HaTorah] is the chairman of the finance committee, which is a role that has extensive power over the Israeli government system. In certain respects he has more power than a minister. This role, certainly when the ultra-Orthodox are part of the coalition, identifies him as part of the system.”

Elituv said that in essence the Ashkenazi ultra-Orthodox members of Knesset have more trouble changing past conventions than to refrain from taking the role of minister.

“If the High Court forces Deputy Minister Litzman to serve as a full minister, in my opinion, he would be rather pleased with this obligation. In this respect Yair Lapid is doing a great service to Knesset member Litzman. He makes him take on the role of minister without getting involved in questions of principles. Litzman could always say, rightly, that he was forced to take the office, and that he would have preferred to remain a deputy,” Elituv said.

The ultra-Orthodox relationship with the state is complicated and full of contradictions. This is seen in almost every realm. For instance, on the one hand, the ultra-Orthodox are opposed to serving in the Israel Defense Forces — preferring to devote their lives to the study of the Torah — while on the other hand, they support and pray for the safety of Israeli soldiers.

The ultra-Orthodox renounce “the Zionist state,” since they see it as a secular mechanism that challenges the old religious worldview. They fear a state that does not operate like a Jewish state according to their ways — one that is not indisputably religious — but they are involved in state institutions and try influence them to be more “Jewish.” They refuse to take on the role of ministers, but are prepared to take official roles such as deputy chairman of the Knesset or deputy minister acting as minister.

In the end, this complexity is the truest reflection of the multifarious relationship of the ultra-Orthodox and the Israeli state.