A scenario in which former Prime Minister Benjamin Netanyahu opts for a plea bargain and leaves politics for seven years at least, could open the coalition door for the ultra-Orthodox parties. 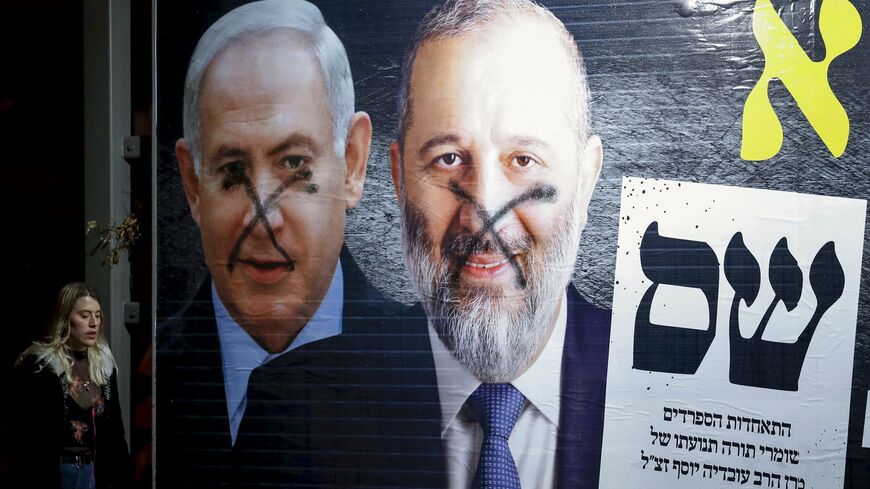 Recent indications that former Prime Minister Benjamin Netanyahu may be on his way out of politics, if he accepts a plea deal in his corruption trial, has sent the state into a dizzying spin. Such a departure would affect the whole political spectrum. More specifically, it could have quite surprising implications for the ultra-Orthodox parties.

The desire to expel Netanyahu from politics is the most effective glue holding together the disparate parties comprising the government formed in June 2021. As long as his larger-than-life presence overshadows Israeli politics, Netanyahu’s bitter enemies will remain united. His disappearance from the political arena, on the other hand, could spell the government’s demise. Absurdly, the government’s salvation could emerge from none other than the two ultra-Orthodox parties, Shas and United Torah Judaism (UTJ), which are currently in the opposition.

Both these parties consider the current government as a threat to the ultra-Orthodox beliefs and lifestyle. What is more, the politician they have for years targeted as an archenemy, Yesh Atid party chair Yair Lapid (now serving as foreign minister), is scheduled to become prime minister in August 2023 under a power-sharing deal with the incumbent, Naftali Bennett.

The government, by the way, has earned the wrath of the ultra-Orthodox by addressing various explosive issues that other governments, including left-leaning ones, have tried hard to avoid.

These include pluralistic prayer at the Western Wall, Judaism’s holiest site, the status of the rabbinical courts and the Chief Rabbinate, certification of Kosher food standards, military draft for ultra-Orthodox men, and more.

The Bennett-Lapid government was the first in Israeli history to give Reform Jews a foothold in state religious institutions, such as conversions to Judaism, Kosher certifications, and Western Wall prayer arrangements, all considered unforgivable sins against the strict codes of the ultra-Orthodox public.

A tax imposed by the government on disposable plastic dishes, which are in abundant use by large religious families, and limits on state support for some ultra-Orthodox families, were viewed as a further slap in the face, prompting repeated UTJ and Shas declarations that they would never cooperate with the government. Until recently, they had boycotted government representatives and refused to meet with cabinet ministers, even when such meetings could have proven beneficial for their voters.

A recent undeclared policy shift has resulted in a few highly publicized meetings between government ministers and ultra-Orthodox Knesset members and rabbis. Perhaps the most prominent was a controversial meeting in late November between Communications Minister Yoaz Hendel and a delegation of high-ranking rabbis seeking to amend a government decision that would shatter their control of cell phone services in their communities. And yet, the two ultra-Orthodox parties continued to reject, at least publicly, any suggestions of cooperation with the government, touting their official position that every effort must be made to bring it down, the sooner the better.

However, Netanyahu’s reported attempts to reach a plea deal are reshuffling the cards. Netanyahu has forged close links with the ultra-Orthodox in recent years, especially with Shas Chair Aryeh Deri and UTJ leaders Moshe Gafni and Yaakov Litzman. This alliance held firm through four elections between 2019 and 2021, although it ultimately failed to keep the Likud in power. While the alliance remains robust, it is based on personal relationships with the Likud leader, not his party.

Even before any decision on Netanyahu’s reported plea bargain in return for a seven-year ban on running for office, various unnamed ultra-Orthodox officials are saying the common denominator between themselves and parts of the multi-party coalition government is greater than between themselves and the Likud. None of those in the running to eventually replace Netanyahu as party leader — whether Knesset members Israel Katz, Nir Barkat or Yuli Edelstein — has woven the same close relations with the heads of the ultra-Orthodox parties.

The Likud has for years been considered a natural partner of the ultra-Orthodox due to the more conservative and traditional identity of its voters. But, here too, change can be expected.

Many voters for whom Shas was an obvious choice nonetheless voted for Netanyahu until now. They believed the best vote would be to ensure his premiership. That was also the reason Deri, once considered more left-leaning ideologically, nonetheless embraced Netanyahu. It was his way of preserving the loyalty of Shas voters. But if Netanyahu no longer heads the Likud, these constituents will likely return to the Shas fold.

More change lies ahead in the ultra-Orthodox party leaderships. Deri, the Shas party founder and its head for close to four decades, is also due to resign his Knesset seat in accordance with his recent plea bargain. Litzman, considered UTJ’s strongman, has also announced he will not run for the next Knesset. These two will therefore not have any interest in holding new elections. On the contrary, they would like to keep the current government alive.

On the other hand, their departure will bolster their Knesset colleagues Israel Eichler and Meir Porush, who have often expressed support for cooperating with the government and would presumably be well placed to join it.

Thus, either way, and perhaps for personal reasons, ultra-Orthodox legislators could now opt for supporting the Bennett-Lapid government.

All this is not just theoretical. Recent reports claim that senior ultra-Orthodox politicians have indeed been in contact with high-ranking government officials. These reported contacts (though denied by Bennett’s people) apparently started before the approval of the state budget last November. At the time, the sides were discussing different scenarios of some ultra-Orthodox legislators abstaining in the budget vote, to guarantee that it passes. Heading these contacts was/is Bennett’s Chief of Staff Tal Gan Zvi, considered close to the ultra-Orthodox leadership. Bennett and his associates are keeping low profile on that, as Finance Minister Avigdor Liberman is an ardent opposer of the ultra-Orthodox joining the government.

The March 2021 elections spawned a government that many believed would be unable to operate in harmony — the hawkish Bennett, the ideological right-winger Gideon Saar, alongside the left-wing Meretz party and the unprecedented participation of an Arab party, Ra’am, as a full-fledged member of the government. This indicates that the traditional right/left division, with the ultra-Orthodox in the rightwing camp, is no longer the only default option. The ultra-Orthodox parties, which insist their ideological affiliation is neither with the left nor the right but with their religion alone, could ultimately save the current government.

by Murielle KASPRZAK and Joseph SCHMID | AFP | May 26, 2022
END_OF_DOCUMENT_TOKEN_TO_BE_REPLACED