Prime Minister Naftali Bennett's decision to dissolve the Israeli Knesset and go for new elections could have perhaps been avoided, had he made more efforts to include the ultra-Orthodox in his coalition. 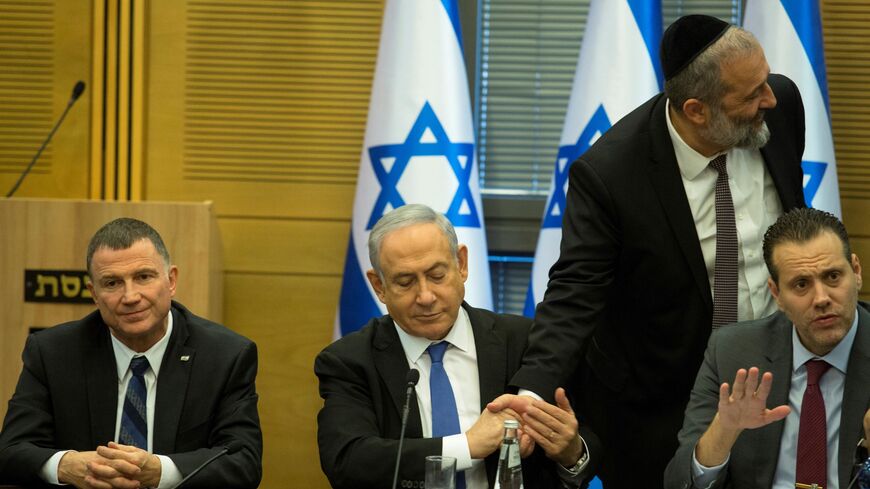 Coalition head Benjamin Netanyahu and his ultra-Orthodox allies did not hide their satisfaction today over Prime Minister Naftali Bennett's and Foreign Minister Yair Lapid's decision to dissolve the Knesset next week. In fact, analysts explained that it was because of the Likud’s intention to present a non-confidence vote on Wednesday that Bennett and Lapid decided what they did. They preferred to take action themselves and control the political developments over the humiliation of a non-confidence vote forced upon them by the opposition.

After the Bennett-Lapid statement, Netanyahu was quick to make a statement of his own, announcing he intends to establish a new government. Still, as abovementioned, there were other forces at work beside him.

In fact, doing his work for him were his two political warhorses, Ultra-Orthodox Knesset Member Moshe Gafni, and Chairman of ultra-Orthodox Shas (who currently does not serve in the Knesset) Aryeh Deri. For several days, the two together, and separately, worked to bring down the government.

Indeed, Gafni was seen coming in and out of Knesset offices throughout June 20, apparently in feverish talks with Yamina Knesset member Nir Orbach. The intention of Orbach to side with the opposition at some point in a non-confidence vote against the government was apparently a key element pushing Bennett to take the dramatic decision.

This battle was not equally matched. When Lapid and Bennett face off against seasoned politicians like Gafni and Deri, with Netanyahu and former veteran Minister Yariv Levin alongside them, there could be no doubt that the latter would win.  After all, what Gafni has forgotten about politics, Lapid hasn’t learned yet.

Surprisingly, ultra-Orthodox politicians seemed at times more involved in efforts to topple the government than Likud members. “It’s strange, but in the Likud, whose members sat for years on leather couches and ran the government, we didn’t see a strong appetite to return from the opposition to the coalition,” a senior Likud member told Al-Monitor on condition of anonymity.

In contrast, the ultra-Orthodox members of Knesset have appeared extremely energetic. They attended the Knesset quorum for long nights without blinking and shot straight at Bennett’s metaphorical head.

There are two reasons: the unbroken alliance with Netanyahu, and the negative approach of Bennett and Lapid towards the ultra-Orthodox.

On the face of it, the ultra-Orthodox had every reason to disengage from Netanyahu. After all, they had quite a few disappointments from the man who promised them wonderful things, but made good on only some of those promises. Despite this, all four election rounds they tied themselves to Netanyahu, and each time ended without forming a government.

However, they didn’t part ways with Netanyahu. One could have thought that national-religious Bennett, a close friend to the Deri-Litzman-Gafni trio, whose views were much closer to them than Netanyahu’s on several issues, would be a good fit for a political alliance. Still, that did not happen. Why?

Ultra-Orthodox sources argue that had Bennett made a bit more effort, they might have run into his open arms. But not only did Bennett not move in this direction, he did everything so that the ultra-Orthodox won’t consider it.

“The ultra-Orthodox could have entered this government on several occasions, if someone in the government had made a real effort,” a senior source in one of the coalition parties told Al-Monitor on condition of anonymity. “If Bennett had not attacked the ultra-Orthodox, if he had tried to somewhat restrain Lapid’s harsh language, if he had succeeded in silencing [Finance Minister Avigdor] Liberman – the ultra-Orthodox would have been in. But he didn’t make the least effort.”

Instead, ultra-Orthodox sources say Bennett hurt them at every opportunity, and spoke disparagingly of them. Only recently, when he didn’t have any strong supporters left in his party, did he suddenly started turning to the ultra-Orthodox. But then, as they have made clear, it was too late.

Also, with subsidies cut, the ultra-Orthodox community is in crisis. Yeshivas are struggling financially, and yeshiva directors have the most influence on ultra-Orthodox members of Knesset. Thus, even ultra-Orthodox legislators with more independent views, like Israel Eichler, who had always refused to tie themselves to the Likud and had considered potential cooperation with the ruling party, were being forced to toe the line.

Beyond that, one can’t ignore the motive of revenge. “Bennett made a ton of errors in this term, which seems likely to be the shortest term served by a prime minister in the State of Israel,” a close associate of Bennett told Al-Monitor on condition of anonymity. “But his most essential mistake was to hurt the ultra-Orthodox. They could have been in the government, because they don’t really have an ideological conflict with him, and if he had really wanted to, he could have found ways to get along with them. But unfortunately, he acted with arrogance, and now he’s paying the price.”

by Ismail BELLAOUALI with Philippe AGRET in Rabat and Marie GIFFARD in Madrid | AFP | Jun 24, 2022
END_OF_DOCUMENT_TOKEN_TO_BE_REPLACED