Israel's Ultra-Orthodox warn Netanyahu not to take them for granted

Israel's ultra-Orthodox parties have followed opposition leader Benjamin Netanyahu through four failed election rounds, but will they continue to support him? 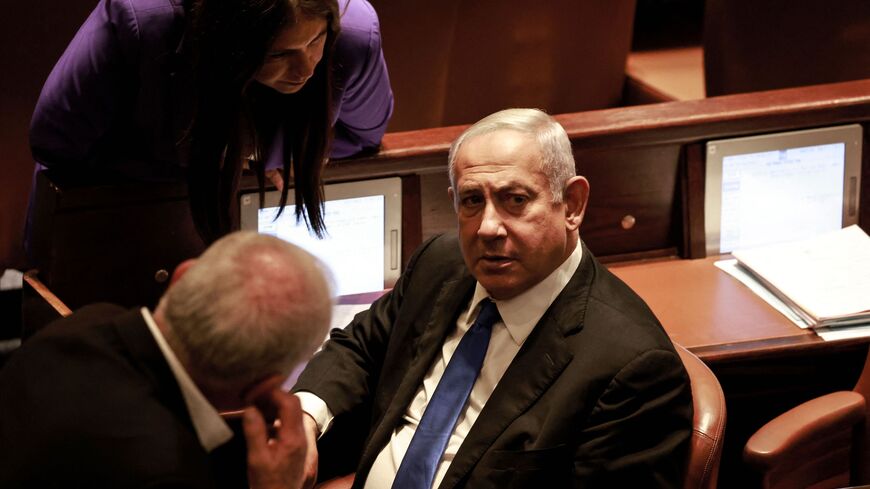 In photos taken just after the government dissolved itself in the very early hours of June 30, the celebrating opposition looked tired but happy. It was after yet another all-nighter of the opposition fighting to take down the coalition.

As they shook hands, their smiles said it all. Opposition head Benjamin Netanyahu and Likud seniors Yariv Levin and Dudi Amsalem mingled with ultra-Orthodox Knesset members Moshe Gafni, Yinon Azoulay and Meir Porush, all congratulating each other.

Clearly, the Likud people knew that if it weren’t for the support they received from ultra-Orthodox parties Shas and United Judaism, the opposition might have crumbled at the beginning of the term. The Likud itself might have also disintegrated.

A senior Likud official who spoke to Al-Monitor on condition of anonymity said that ultra-Orthodox political leaders Aryeh Deri, Moshe Gafni, and Yaakov Litzman had made the conditions of their mutual support very clear. “We’re behind you as long as Netanyahu heads the Likud. If the Likud starts playing games and chooses less popular figures as its leaders, such as Yisrael Katz or Yuli Edelstein, they should consider one point: The absolute support of the ultra-Orthodox should not be taken for granted. If that happens, we’ll start looking at what the coalition has to offer.”

Netanyahu’s position as head of Likud and of the opposition was unshakable throughout the past four years. Although he failed to form a stable coalition time and again for four straight elections, no one in the Likud seriously challenged his leadership.

Still, that could soon change, at least in regard to his ultra-Orthodox support.

Knesset member Israel Eichler, considered the spokesperson of United Judaism party, was the first to name the divide between Netanyahu and his loyal supporters. Shortly before the Knesset dissolved itself, he said that their support of Netanyahu should not be assumed and that if Netanyahu can’t form a government, the ultra-Orthodox parties may look at alternatives.

Eichler’s words shocked his listeners and he was forced to retract them. But then, Gafni refused to provide a straight answer to whether his faction within the United Judaism party would back Netanyahu if he doesn’t obtain the numbers needed to form a government. Gafni’s hesitation drew a harsh response from Deri, but Gafni — who sinned again by agreeing to host Lapid at the 70th birthday party his aides threw for him — refused to apologize.

In this past week, Gafni again clarified that while there is a natural partnership with the Likud, it is not necessarily eternal. At his granddaughter’s wedding this week Transportation Minister Meirav Michaeli danced in the women’s section. Her invitation, like the warm telephone call Gafni fielded from Lapid, broadcast to the wider public that something is happening.

Amid all the ultra-Orthodox lawmakers, Gafni is the one setting the tone. Litzman had recently agreed to retire from politics as part of a plea bargain with the state prosecutor. Deri, the undisputed leader of Shas, also retired from the Knesset, although he continues to lead Shas. Gafni was making it clear to Deri, who remains outside, as well as to Litzman’s successor Yitzhak Goldknopf that he is now calling the shots.

Reinforcing this message on the eve of the Knesset's dissolution, Gafni tried to advance a law that would lower the vote threshold to less than 1.5%. The message to his partners within the United Judaism alliance was explicit: If you keep strong-arming me on what to say and how to say it, I’ll split off. In the next election my faction Degel HaTorah will run alone, and Agudat Yisrael, the other faction in the United Judaism alliance, will be forced to run independently.

Gafni continued to twist the knife, announcing that Degel is considering running alone. The threat worked. Evidently, Agudat Yisrael does not want to repeat the stinging defeat it suffered in the local elections.

These public disputes have shown that the United Judaism party has been shattered after a year of unity in the opposition, and former Prime Minister Naftali Bennett’s efforts to persuade ultra-Orthodox legislators to defect or even abstain from voting were scornfully rejected.

Nevertheless, Netanyahu must have still worried, which is likely the reason he tried to prevent the dissolution of the Knesset and to form an alternative government. He knows what the ultra-Orthodox factions know, even if they don’t declare it openly: Their support isn’t what it had been.

A senior source in United Judaism explained to Al-Monitor on condition of anonymity, “Our electorate tends toward Netanyahu, and we have no doubt that our public won’t forgive us if we dare support any candidate who isn’t Netanyahu, even if it is someone from the Likud and a right-wing government. Still, we have no choice. We simply are not able to even imagine another term in the opposition, so we'll give Netanyahu a chance. But if he can’t do it, we’ll try to look at alternatives.”

The source also commented on “yeshivas that are collapsing because of the damage to budgets," saying, "Yeshiva students with families can’t function, not after the blows to their scholarships [from the current government]. Then we have the rise in the cost of living that also impacts the students. We have no doubt that we must return to the days of sitting in the coalition, where we have much more influence.”

“Netanyahu,” he said, “received the support of United Judaism time after time, not only following elections when the ultra-Orthodox consistently prevented governments from forming without him, but especially in the past year when he was in the opposition. While the Likud stuttered, it was the ultra-Orthodox Knesset members who fought back. They were the ones to stand behind him as they managed his war. They fought battles at night, prevented laws from passing and thwarted every step the coalition tried to take, and thus caused its downfall. But the line of credit Netanyahu received is over. It’s not unlimited.”