On Tisha B'av, religious and secular Jews gather to debate the issue of bigotry and the often difficult relations between the many diverse sectors of Israeli society. 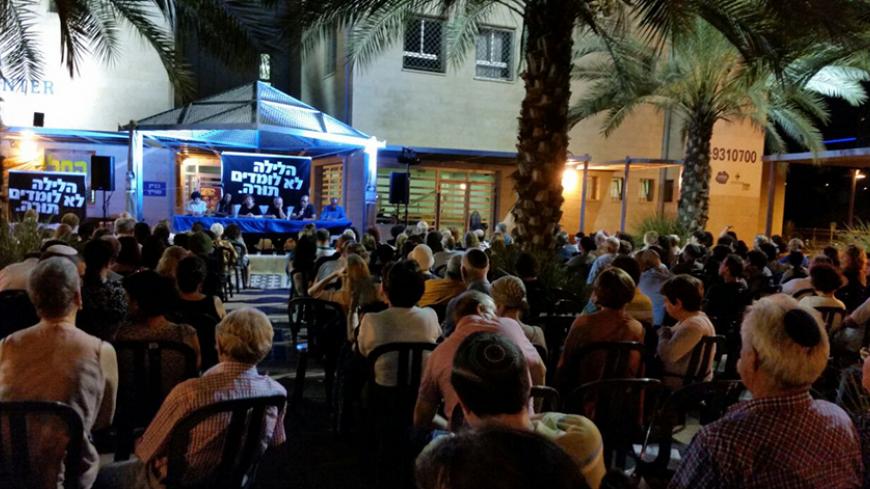 A Tisha B'av discussion gathering in the city of Rehovot, Israel, July 2015. -

The eve of the 9th of Av, by the Jewish calendar, is a special night for the Jewish people. On this night, according to tradition, the First Temple was destroyed by the army of Nebuchadnezzar, the king of Babylon, in the year 422 B.C. to Talmud sages (586 B.C. to historians), and the Second Temple was destroyed in A.D. 70, amid the defeat of the Jews’ Great Revolt against the Roman Empire. With the destruction of the Second Temple, the Jews were exiled from the Land of Israel in what is considered one of the greatest crises in the history of the Jewish people. Even almost 2,000 years after the destruction of the temple, this day is commemorated in most Jewish communities. Both religious and traditional Jews fast and mourn. In a singular exception, the 9th of Av is the only day of the year when the study of Torah is forbidden, to encourage focus on the national tragedy.

Tisha B'av has become a time for general social soul-searching for many in Israel. Israeli society, with its many sectors, ethnicities and groups, gathers on this night in dozens of social forums across the country to discuss a problem that many probably prefer to avoid the rest of the year: gratuitous hatred, the hatred of people or groups for no practical reason. According to the Talmud (b. Yoma 9b), this hatred was the reason that the Second Temple was destroyed. In the Second Temple period, the Jewish people in Israel were divided into sects and streams that fought each other, which brought about their unsurprising defeat by the Romans.

The gatherings, in which both religious and secular Jews participate, are produced and organized by the Sderot Conference for Society, the Sapir Academic College and the religious-Zionist Bnei Akiva and secular Hanoar Haoved Vehalomed youth groups. At dozens of sites across the country, the gatherings attract politicians across the political spectrum, academics, former judges, social activists, journalists and authors, all deliberating on the topic of gratuitous hatred.

The initiative, founded 20 years ago by the Tzav Pius organization as a response to the 1995 assassination of Prime Minister Yitzhak Rabin, which caused a deep rift in Israeli society, has become a widespread and cross-cultural phenomenon in recent years. At the gatherings, participants take turns reading, according to the tradition of the 9th of Av, the book of Lamentations — a lament ascribed to Jeremiah the Prophet on the destruction of the temple. After the reading, a pair of speakers debate from opposing points of view. The audience is invited to participate and respond. At the oldest such event, held on the roof of the Gan Ha’ir shopping center in Tel Aviv on July 25, Knesset member Yinon Magal of the right-wing religious Habayit HaYehudi party debated Ayelet Nahmias-Verbin of the center-left Zionist Camp.

At the gatherings, which are free and open to the public, participants sometimes sit on the floor in recognition of an ancient Jewish custom commemorating the destruction of the temple. The main discourse centers on the danger that internal conflicts within Israeli society could lead to the destruction of the Third Temple — the State of Israel — just as they brought about those of the First and Second Temples.

“If we don’t deal with social polarization, especially between right and left, we could witness another destruction in our lifetime,” says 24-year-old Eran Zilber at the discussion tent for young people at Tel Aviv Rabin Square. The young participant, who identifies with the right, tells Al-Monitor, “These meetings point out the gaps between us, but they also point out that we are brothers who have more in common than we have differences.”

According to Gen. (Res.) Uzi Dayan, the president and founder of the Sderot Conference for Society and an active participant in the discussions, “There are deep rifts in Israeli society. Although we seem to be advancing, in actuality the gaps are only widening: right and left, the haves and have nots, religious and secular. Israeli society is still very sectarian, and that’s the reason that the topic of the forums this year is 'tribes of Israel 2015' — the different groups in Israeli society, the rifts and the constant tension that exists between these groups.”

In a conversation with Al-Monitor, Dayan says that another problem discussed in these forums touches on Israeli identity in general. "Our cultural and national identity is lacking; it isn’t whole," he argues. "Education in Israel created the image of the new Jew based on biblical figures, the Masada myth and Hanukkah stories. We went from the Bible directly to the pre-state resistance era, intentionally ignoring the whole Middle Age period. We were taught that we are the descendants of the Maccabean. We were not taught that the rabbinical literature, the Jewish Galician community who suffered pogroms and the flourishing Jewish life in Morocco were also part of our origins. And so, on this night we open up this question.” Dayan believes that this deficiency in identity contributes a great deal to the social conflicts in Israel.

Despite the good intentions of the gatherings’ organizers, those who founded and led this idea from the start see things differently now. “I think that these gatherings are meaningless today,” Aliza Gershon, the director of the Tzav Pius organization and one of the pioneers of the initiative, tells Al-Monitor. “Evaluation studies we conducted revealed that it has no therapeutic value. If we examine parameters like the acquisition of information, change in positions and change in behavior, we discover that it has no significant impact. Participants do feel good about themselves and feel very compassionate, but it makes very little practical difference.”

Dayan firmly rejects these arguments. “In my opinion, it does have an impact,” he says decisively. “This is a process of an educational character, and like any other educational topic it’s not something you can quantify with research tools. The thousands of participants in these events are not looking for entertainment, but for genuine content. They estimate that the social values discussed at these gatherings are important. I think that the gatherings generate a positive public atmosphere. How positive and at what rate? I believe in slow processes.”

A survey published July 24 showed that half of Israelis fear the destruction of the State of Israel. Accompanying this fear is the feeling that only true social cohesion could withstand these threats, and that the lack of it is a menace that imperils the existence of the state and its society. According to the same survey, a quarter of Israelis believe that “gratuitous hatred” is the greatest threat to Israeli society.

This perpetual desire for social unity shows that Israeli society, which is no longer a society of immigrants and is mostly composed of natives, still sees itself as a type of unstable, isolated Jewish community surrounded by enemies, fighting to keep itself whole. It seems that despite the creation of an independent state for the Jewish people, the ancient Jewish fear of pogrom and destruction still reverberates in its collective mind.