Can Netanyahu get Congress to reject nuke deal?

The United States and Israel are close allies, but the battle over the nuclear deal is getting fiercer by the moment. 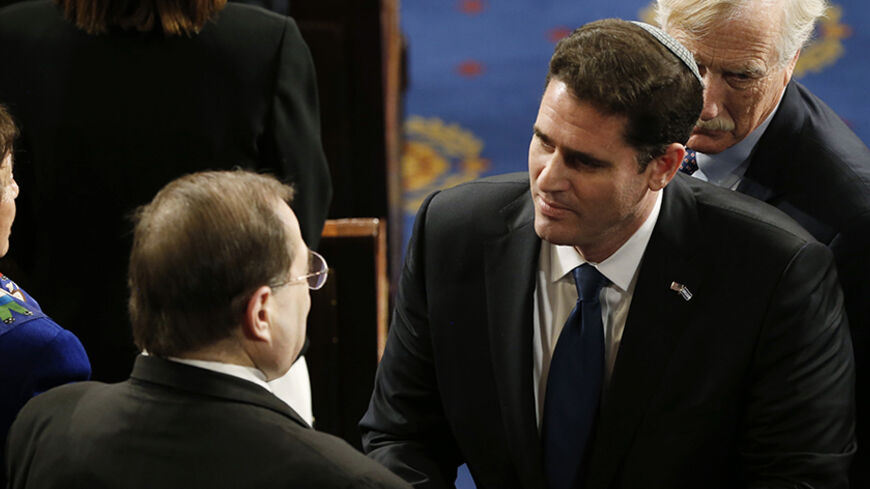 A rare, perhaps fateful coincidence in late September could present us with what Washington’s political pundits call “a perfect storm.” The date of Congress’ decisive vote on the agreement between Iran and the superpowers could coincide with the annual meeting of the UN General Assembly in New York. Attending that event will be none other than the agreement’s great nemesis, Israeli Prime Minister Benjamin Netanyahu, who will appear in dangerously close proximity to US President Barack Obama and Iranian President Hassan Rouhani. If a scenario like that played out in a Hollywood movie, it would immediately lose credibility. And yet, under certain circumstances, this exact scene could play out in real life.

The 60 days Congress has been given to study the agreement began on July 20. The first vote will take place soon. It is most likely that Obama will lose that vote, but he could veto the decision within 10 days. It will then take a few more days for the truly decisive vote, in which two-thirds of the Senate will be needed to override the president’s veto.

It is that period between the first vote in Congress and the possible second that will coincide with the UN General Assembly in New York.

Will Netanyahu arrive in the United States early so he can devote the best of his time, energy and rhetorical talent to one final, desperate campaign to win the hearts of US legislators on Capitol Hill? Right now, it seems like he will, though Netanyahu has yet to make his final decision. Then again, as anyone who knows him will say, even after he makes a final decision, he could make another, more final decision.

This is after all one of the most momentous decisions that Netanyahu will make, and it could have serious diplomatic ramifications. Netanyahu is worried about Obama’s response, regardless of whether he wins or loses. Still, it will be hard for him to resist the historic temptation of carrying on with his fight. After all, he considers it a mission of messianic proportions to prevent Iran from attaining a nuclear weapon, no matter the cost.

The actual battle began this week with the start of the countdown. The opening salvo was a series of leaks from Jerusalem, claiming that the prime minister’s office has not yet given the OK to its Washington troops to launch their major summer offensive. Then came the weekend US talk shows. Netanyahu plowed through these shows on one network after another, but so did US Secretary of State John Kerry, whose message was the exact opposite of what Netanyahu was saying. These two old friends, who became bitter enemies, were locked in a personal derby of sorts throughout the weekend.

This battle is expected to continue until the very last moment. US surveys indicate that supporters of the agreement significantly outnumber its detractors. A Washington Post-ABC News poll, for instance, found that 56% of the public supports the deal, while only 37% opposes it. Obama will take this information and run full steam ahead with it. His legacy depends on the deal with Iran, and he has no intention of backing down. US Vice President Joe Biden responded to Israel’s effort by holding a conference call July 20 with American Jewish leaders. There hasn’t been a clash of titans like this in a very long time, especially one pitting two ostensible allies against each other.

In a conversation with Al-Monitor last weekend, one Republican leader on Capitol Hill, who asked that his name not be shared, said that the campaign against the agreement will be tough, but it will not be impossible. When asked what kind of chances he thinks opponents of the deal really have, he said, “That’s not at all clear. What is clear though is that they have a chance.” Other Republicans say that the chances of them succeeding run about 30%, though even this seems overly optimistic. “I want to believe that it’s possible,” one of them told Al-Monitor on condition of anonymity, “but I can’t see where we’ll get the votes we need from the Democrats. When push comes to shove, it will be hard for people like Sen. Chuck Schumer [D-N.Y.] to come out against the president on such a critical vote.”

Obama’s strongest card is the slogan that has become his constant mantra, that the only alternative to this agreement is war. Even if some consider this argument emotional blackmail, the bottom line is that the slogan has proven to be politically expedient.

Netanyahu’s side can take comfort in the final article written by Abraham Foxman in his capacity as the national director of the Anti-Defamation League. Foxman, a longtime supporter of Israel, has a reputation as a pragmatist, and can hardly be called obstreperous. Nevertheless, he recommended that Congress vote against the deal. Netanyahu’s team is now searching desperately for other prominent Democrats who would dare to come out against their president. The task seems almost impossible, though. The focus, of course, is on Jewish legislators with a commitment to Israel. Nevertheless, even then the chances are slim. As one source close to the Democratic Party told Al-Monitor on condition of anonymity, “It seems to me as if Democratic legislators will see this effort as an attempt to drive a wedge between them and their president. There is a red line, and it is doubtful they will cross it.”

There are those who recommend that Netanyahu keep a lower profile. He should leave the final battle to AIPAC, Jewish leaders and his supporters on Capitol Hill, instead of participating personally and throwing all his weight into the campaign. It’s tempting. So far, Netanyahu has not allowed Israel’s security forces to enter into a dialogue with the Americans over an attractive compensation deal and vital strategic coordination package for the day after the agreement. He is paying a steep price for his ideology. If he lowers his profile now, there is a chance that the UN event will take place after the president’s victory in Congress. This would leave a slight chance for reconciliation between Netanyahu and Obama, including a very visible meeting at the White House, the healing of their rift and the two men strolling shoulder to shoulder into the horizon.

Based on conversations Al-Monitor had in both capitals this week, the chances of this optimistic scenario unfolding tend toward zero. “They’ve crossed the Rubicon,” said one official source on condition of anonymity. Well informed on what is happening in both capitals, the source was confident: “The amount of bad blood between these two leaders makes it almost inconceivable that the rift between them can be mended so easily. Besides, Netanyahu hasn’t conceded anything so far. His rhetoric this weekend on almost every Washington talk show made that resoundingly clear.”

To understand the situation, it is important to know Netanyahu. Over the past decade, he has managed to convince himself — and a significant portion of his citizens — that his historic, messianic, perhaps even divine destiny is to stop the Iranian nuclear project, no matter the cost. Netanyahu believes with every fiber of his being that the agreement reached with Iran will allow the ayatollahs’ regime to attain nuclear capability within a decade, if not less. Exactly three years ago, in 2012, after agonizing deliberations, Netanyahu backed down at the very last minute and rejected the military option against Iran’s nuclear infrastructure. The only thing left to him now is the US option, which he is pursuing despite all the odds.