With US public opinion on Israel increasingly divided along partisan lines, Democrats are feeling emboldened to take a stand against President Donald Trump — and Prime Minister Benjamin Netanyahu. 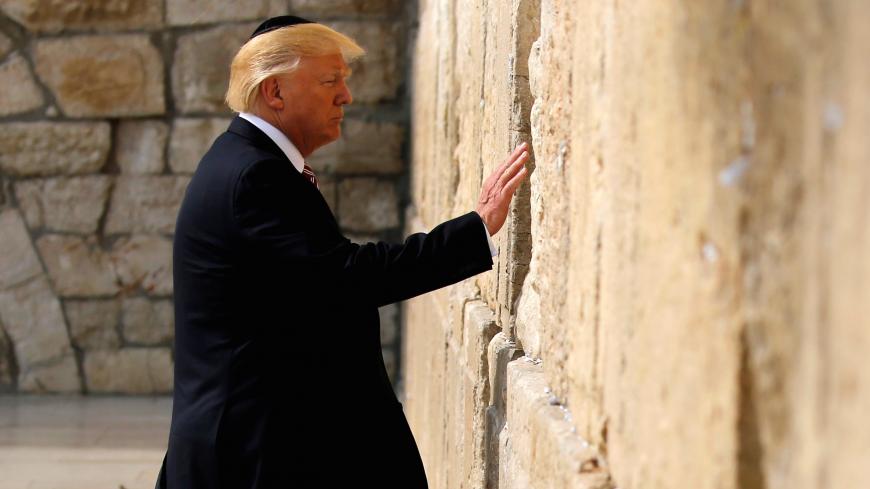 US President Donald Trump prepares to leave a note at the Western Wall in Jerusalem, May 22, 2017. - REUTERS/Jonathan Ernst

US Vice President Mike Pence’s address to the Knesset on Monday was greeted by glowing praise from Prime Minister Benjamin Netanyahu’s right-wing coalition — and a bitter protest from Arab Israeli lawmakers.

With Pence promising to relocate the US Embassy by next year following President Donald Trump’s decision to recognize Jerusalem as Israel’s capital, 13 Knesset members unfurled a banner that read “Jerusalem is the capital of Palestine.” As police ushered them out, Netanyahu led his allies in thunderous applause.

“It is deeply humbling for me to stand before this vibrant democracy," Pence said with a smile.

The disruption echoed Netanyahu’s own address to the US Congress three years ago, when Republican leaders invited the Israeli leader to publicly make the case against President Barack Obama’s nuclear deal with Iran. The speech was boycotted by 58 Democrats outraged over the unprecedented diplomatic affront to the nation’s first African-American president, undermining bipartisan support for Netanyahu and the Israeli right more generally.

Now Trump’s hawkish pro-Israel policies — from renegotiating the Iran deal to slashing US funding for Palestinian refugees to relocating the embassy without regard for Palestinian concerns — is once again testing longtime bipartisan support for Israel. More and more Democrats, emboldened by shifting public perceptions, are challenging elements of what had been a sacrosanct relationship.

"I think [the Jerusalem move] is a very isolating event," House Foreign Affairs Committee member Gerry Connolly, D-Va., told Al-Monitor. "It looks almost like a partisan decision to help a particular government in Israel at the expense of the peace process, at the expense of other communities in the region, especially the Palestinians.”

Several of Connolly’s high-profile counterparts in the Senate have also voiced their opposition to the Jerusalem move, even as they voted 90-0 to renew their support for the embassy’s eventual relocation as recently as June. Congress first passed legislation calling on such action in 1995 with broad bipartisan support.

In line with a number of small leftist Israeli parties that oppose the embassy move, some Democrats argue that the timing and rollout of Trump’s decision will end up hurting Israel.

Sen. Dianne Feinstein, D-Calif., a key player in getting the 1995 law passed, called the move “a major setback to a two-state solution.” She argued that the Jerusalem Embassy Act was intended only to function “in the context of the Oslo peace process” and noted that currently “there are no direct negotiations.”

A number of potential contenders to replace Trump in 2020 have also weighed in.

Senate Foreign Relations Committee member Chris Murphy, D-Conn., said in a statement that “Jerusalem is and always will be the capital of the state of Israel” but voiced concerns that Trump made the move “without fully considering the political and security implications.”

Sen. Elizabeth Warren, D-Mass., argued during a speech at the Union for Reform Judaism’s December convention in Boston that the embassy move could hamper Israeli-Palestinian peace prospects .

And Sen. Bernie Sanders, I-Vt., who like Warren and Murphy voted for the resolution in June, also denounced the move.

“There’s a reason why all past US administrations have not made this move and why leaders around the world have warned Trump against it,” Sanders tweeted following Trump’s December decision. “It would undermine the prospects for an Israeli-Palestinian peace agreement and severely, perhaps irreparably, damage our ability to broker it.”

Republicans, however, argue that Trump’s decision to move the embassy has strengthened the US-Israeli relationship after an icy personal relationship between Obama and Netanyahu.

“The vice president’s trip underscored the importance and strength of the US-Israel relationship and how that relationship has improved under this administration,” Rep. Ileana Ros-Lehtinen, R-Fla., the chairwoman of the House panel overseeing the Middle East, told Al-Monitor via email.

Still, the rift with Netanyahu over the nuclear deal has prompted more and more Democrats to abandon traditional forms of advocacy for Israel in favor of more liberal alternatives. With the American Israel Public Affairs Committee (AIPAC) embracing Trump's policies, the liberal group J Street appears on track to possibly surpass the record 124 candidates for Congress it backed in 2016, with 92 Democrats already endorsed for this year’s midterms, including Feinstein, Murphy and Connolly.

Sanders notably skipped AIPAC’s annual conference in Washington in 2016 when he was running for president. And last year, both he and Feinstein met with Palestinian activists hoping to muster support against Israel’s occupation of the West Bank.

Following a November meeting with Palestinian activist Nasser Nawaj’ah, Feinstein led 10 Democratic senators in penning a letter to Netanyahu urging the Israeli government “not to demolish the Palestinian village of Susiya and the Bedouin community of Khan al-Ahmar.” Both Sanders and Warren signed on.

Sanders also met with  Palestinian activist Issa Amro in Washington in September after joining Feinstein in a letter calling on Secretary of State Rex Tillerson to monitor Amro’s indictment by Israeli authorities on charges of inciting violence.

Many Democrats have stayed quiet about or denounced Trump’s decision to withhold funding for the UN agency for Palestinian refugees.

Earlier this month, the Trump administration cut annual US funding to the UN Relief and Works Agency (UNRWA) from $125 million to $60 million, citing the Palestinian Authority’s rejection of US peace efforts following the Jerusalem decision. Many Republicans and pro-Israel groups have long called for an end to US support for UNRWA, arguing that Hamas has co-opted its schools in the Gaza Strip.

"The administration’s decision to withhold portions of our voluntary contributions to UNRWA was a welcome decision but it didn’t go far enough,” Ros-Lehtinen told Al-Monitor in an email. “UNRWA is an agency with an ever-expanding and politicized mandate, well-known ties to the terror group, Hamas, and has been used as a platform to promote and incite anti-Israel and anti-Semitic statements amongst the Palestinian population.”

Conversely, Democrats were quick to condemn Trump’s threat to cut aid from countries that voted at the UN against the US decision to recognize Jerusalem as Israel’s capital.

“Making unilateral decisions such as moving the US Embassy, such as both bilateral and multilateral assistance from which the Palestinian community benefits — and so does the Israeli community — is harmful to broader, long-term goals,” Connolly told Al-Monitor. “These are decisions that should be considered in the context of a broader peace process.”

For many Democrats, the cracks in the previously bipartisan consensus on Israel can be traced right back to Netanyahu’s 2015 address.

While Netanyahu has recently credited his 2015 speech for prompting Trump’s threats to withdraw from the nuclear accord, Democrats maintain that it actually served to rally around the Obama White House and support the deal. Even consistent pro-Israel hawks who voted against the deal — such as Senate Minority Leader Chuck Schumer, D-N.Y., Senate Foreign Relations Committee ranking member Ben Cardin, D-Md., and Engel — are now calling on Trump to stay in the deal.

“It was a big mistake for Netanyahu to come to Congress, both in terms of the issue of the deal and of offending many Democrats,” she said. “But in retrospect, I think it helped us.”