Democrats in Congress are taking aim at US Ambassador David Friedman as the deepening alliance between the US government and the Israeli right leaves them in the cold. 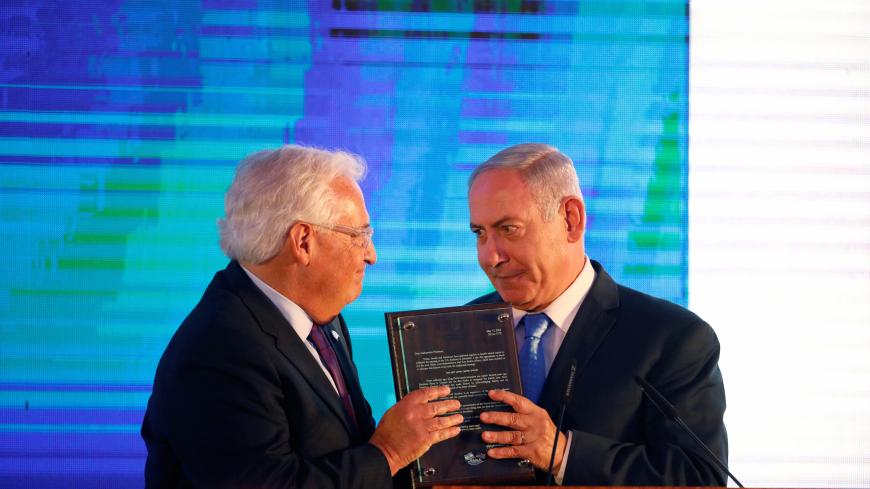 Israeli Prime Minister Benjamin Netanyahu hands US Ambassador to Israel David Friedman a letter of appreciation during a reception held at the Israeli Ministry of Foreign Affairs in Jerusalem, ahead of the moving of the US Embassy to Jerusalem, May 13, 2018. - REUTERS/Amir Cohen

US Ambassador David Friedman has been acting as the Israeli right-wing’s unfiltered apostle of late.

He has insisted that “settlers aren’t going anywhere” and consistently blamed the Palestinians for the breakdown in peace talks. He invited prominent pro-Trump evangelicals to dedicate the US Embassy in Jerusalem last month, then pronounced himself “very concerned” that no Democrats showed up, even though none had received a White House invitation. And just this week, he admonished journalists who question Israel for shooting protesters in Gaza and told the reporters to “just keep your mouths shut.”

The Israeli government has been lapping it up, with Prime Minister Benjamin Netanyahu praising the Donald Trump administration’s “unvarnished” and “straightforward” envoy. But Democrats and left-leaning American Jews are warning that the lovefest between the Israeli and US right is further damaging the already strained bipartisan consensus in support of Israel, with potential costs to the bilateral relationship down the line.

“There is clearly a political electoral wedge being driven by Republicans, and I think President Trump and Prime Minister Netanyahu are contributing to that,” Ron Klein, the chairman of the Jewish Democratic Council of America, told Al-Monitor. “Israel’s not best served by just lining up with one political party. Israel’s best interest is served by maintaining good relations with both parties.”

Friedman, a former Trump bankruptcy lawyer and longtime West Bank settlement advocate, is “helping accelerate and driving this wedge between Democrats and Republicans even deeper,” Klein added. The ambassador is also reportedly in line to gain control of the US consulate in East Jerusalem, thereby undermining the Palestinians’ direct line to the State Department.

In turn, pro-Israel Democrats in Congress are singling out Friedman to vent their frustrations.

After Friedman’s comments about the embassy ceremony, the top Democrat on the House Foreign Affairs Committee, New York Rep. Eliot Engel,  and five other Democrats supportive of the embassy move wrote Friedman a letter noting that the White House did not issue any formal invitation for lawmakers to attend the ceremony. They suggested that the talking point “may have been prepared in a way to play politics with the situation rather than tell the true story” and bemoaned a “dangerous effort to politicize the US-Israel relationship.”

Democrats, however, privately acknowledge that their pushback is complicated by the fact that there’s little daylight between the US and Israeli governments.

“Traditional Democratic allies of Israel are being put in uncomfortable situations and positions the more the issue of Israel is politicized both by Trump but also with a willing acceptance by the Israelis,” a source familiar with the debate told Al-Monitor on the condition of anonymity. “It’s the part of the Israelis that makes it a more difficult thing.”

Democrats who are not currently in office are blunter. Klein, a former congressman from Florida, pointed to Netanyahu’s rebuke to President Barack Obama’s pursuit of the Iran nuclear deal during a 2015 speech to Congress, which was poorly received by Democrats, as well as the prime minister’s endorsement of Trump’s controversial proposal to erect a wall on the US-Mexican border.

“It’s OK to respectfully disagree with Prime Minister Netanyahu if we disagree with something he does,” said Klein. “If some people criticize Netanyahu on settlement policy or Iran or something like that, that’s a legitimate point of view that anybody can have.”

Republicans counter that Democrats are unwilling to acknowledge the embassy relocation as a victory for a president they disdain. Pressure from their base, they say, has caused pro-Israel Democrats to lash out at Friedman as a channel for their frustration.

“It’s tough for them to separate their pro-Israel attitudes from their attitudes when it comes to Republicans and the president,” Neil Strauss, the digital director for the Republican Jewish Coalition, told Al-Monitor.

The coalition responded to Engel’s letter to Friedman with a statement calling the Democratic missive “a shameful act of chutzpah.” The statement noted that Rep. Joe Wilson, R-S.C., and Sen. Lindsey Graham, R-S.C., had invited their Democratic counterparts to participate in congressional delegations to the embassy opening.

“They stooped very low to undermine this historic event and to embarrass David Friedman, who is serving ably to represent the United States in Israel,” coalition executive director Matt Brooks said.

“I have worked for 30 years to make sure support for Israel is bipartisan and I’ll continue to do so,” added Engel.

That commitment is being sorely tested by an increasingly polarized US electorate. A Pew research poll released earlier this year found 79% of Republicans sympathize with Israel more than with the Palestinians, versus only 27% of Democrats.

The increase in pro-Palestinian sentiment has prompted some Democrats to proactively speak out on behalf of the 119 Palestinians killed and thousands wounded during the Gaza border protests. Reps. Mark Pocan, D-Wis., Daniel Kildee, D-Mich., and Hank Johnson, D-Ga., even penned a letter to the Israeli ambassador requesting access to the Gaza Strip. The Israeli Embassy told Al-Monitor that it would facilitate access to Gaza as part of an official delegation, but House rules stipulate that only the majority party may organize congressional delegations.

“[Democrats] can blame Republicans all they want, but the truth is the RJC [Republican Jewish Coalition] and all the other groups on the right in the pro-Israel sphere, we don’t work to erode support on the left,” Strauss said. “I think their problem is that — and it’s reflected in the polling — that their base has just kind of gone away from pro-Israel attitudes.”