The nuclear deal should be a prelude to major coordination between Saudi Arabia and Iran if it is to help bring about peace in the region. 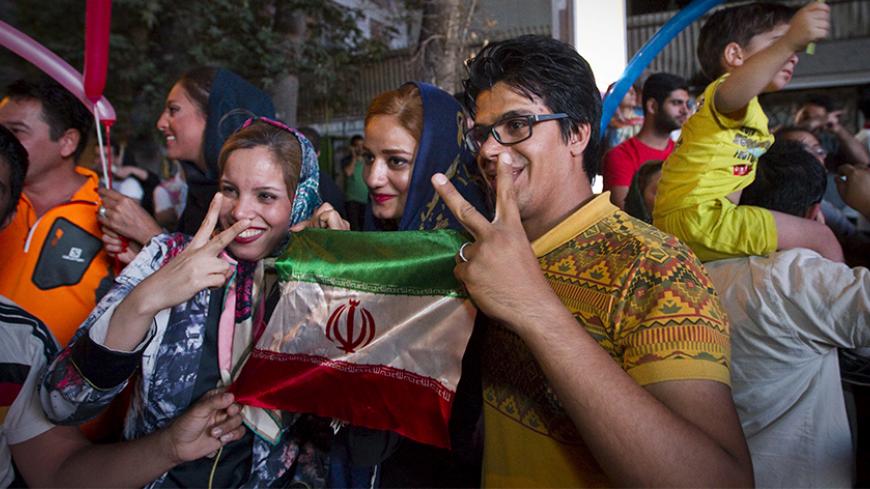 Iranians gesture as they celebrate in the street following a nuclear deal with major powers, in Tehran, July 14, 2015. - REUTERS/TIMA

Iran's July 14 signing of a nuclear treaty has reduced the historic strain between Iran and the West, but it cannot be expected to foster peace without broad consideration of other players in the region, particularly the Sunni Arab axis.

The peace process largely hinges on whether Iran chooses to preserve its unilateral policy in the region or communicate with other regional powers, particularly Saudi Arabia and Turkey, to reach a comprehensive solution to the region’s crises.

Based on that, it is important to understand how Iran's rivals might perceive and react to the nuclear deal.

Saudi Foreign Minister Adel al-Jubeir traveled to the United States on July 17 to meet with US President Barack Obama to express Saudi Arabia’s concerns. Moreover, Saudi newspapers, such as al-Watan, al-Madina and al-Sharq al-Awsat, said the deal poses a great challenge to Saudi Arabia, which prompted members of the Saudi Consultative Assembly to call for development of “a nuclear program similar to that of Iran.”

The competition for arms between Iran and Saudi Arabia emerged a few months before the nuclear deal was announced. Deputy Crown Prince and Minister of Defense Mohammed bin Salman made an unprecedented visit June 17 to Russia, during which six strategic agreements were signed. Most notably, both parties agreed to activate a joint committee for military cooperation and signed an agreement to cooperate on nuclear energy.

During the same visit, Saudi Arabia expressed its desire to purchase a tactical Iskander ballistic missile system. Prior to that, Saudi Crown Prince Mohammed bin Nayef and Salman made visits in May and June, respectively, to France, and mainly discussed military ties between France and Saudi Arabia.

According to statements by Saudi officials, the nuclear deal will enable Iran to further support Saudi Arabia’s regional opponents in Syria, Lebanon, Yemen and Iraq, and will strengthen the Iranian regime. Therefore, they said, the existing conflict in the region will extend and grow deeper, leading to additional wars and fighting.

The day after the deal was signed, Iranian Supreme Leader Ayatollah Ali Khamenei confirmed that Iran will continue to support its allies in the region, in Palestine, Yemen, Syria, Iraq and Bahrain. This has angered the Bahraini government, which on July 19 summoned Iranian Ambassador Mortadha Sanubari in protest against Khamenei’s remarks.

Following up on Iran’s regional policy, there appear to be different visions within the country. The first is that of the reformist current, led by Expediency Council Chairman Hashemi Rafsanjani, who believes there is a need for coordination and dialogue with Saudi Arabia to resolve regional crises. Rafsanjani has repeatedly called for improved communication with Saudi Arabia, and he supports a regional agreement between the countries.

The second vision is that of the radical current, which believes Iran has succeeded in its regional policy against the Saudi axis, and that there is no need for coordination with Saudi Arabia in any regional issue in Iraq, Syria, Lebanon, Yemen and Bahrain. This vision stems from the feeling that “Iran is not an important country in the region, but rather the only important country in the region,” an Iranian official who refused to reveal his name told former United Nations special envoy to Syria Lakhdar Brahimi in 2013.

In the context of the radical current, Islamic Revolutionary Guard Corps (IRGC) leaders, particularly Qasem Soleimani, commander of the Quds Force special unit, are considered among the supporters of an escalatory policy against Saudi Arabia. Although the current Iranian government is reformist, regional files management is not in the hands of the official government institutions such as the Iranian Foreign Ministry, but rather the IRGC and its international arms, such as the Quds Force.

Based on that, the political scene in Iran shows that the signing of the nuclear deal will not necessarily contribute to achieving peace in the region. Rather, it could widen the rift and escalate armament competition and regional conflict in the absence of a joint vision bringing together the regional powers’ national interests.

Accordingly, there is an urgent need to find a balance of power and understanding between the regional players, particularly Iran and Saudi Arabia. This should be the US administration’s second objective after the nuclear deal. It can now act as a mediator between Iran and Saudi Arabia to converge the views and produce a durable and stable balance in the region.

As part of such a comprehensive vision, the nuclear deal can contribute to achieving regional peace. Nevertheless, placing the deal outside this vision could have an unexpected adverse role by stirring new regional conflicts that may affect the current conflict.