The ongoing attacks against nightclubs and liquor stores in Baghdad suggest an alliance between religious currents and the Iraqi government. 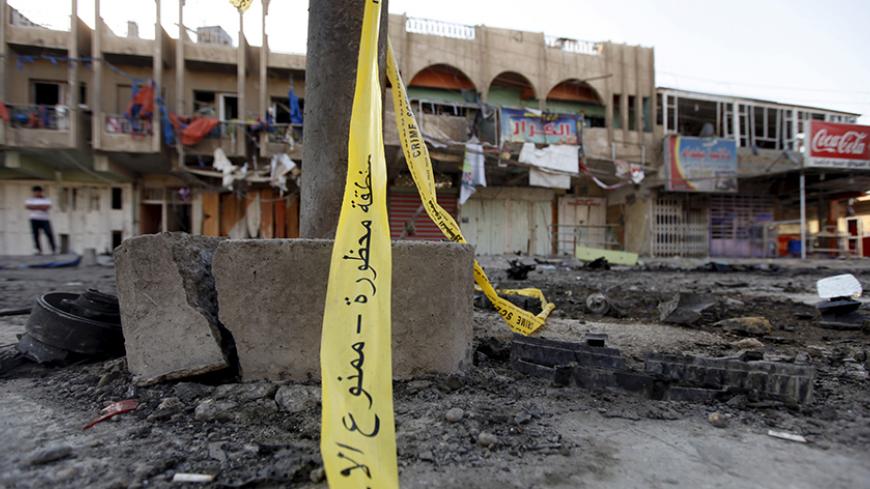 The site of a bomb attack is seen in Baghdad, July 23, 2015. A car bomb exploded in a crowded marketplace in a mainly Shi'ite Muslim district of the Iraqi capital on Wednesday, killing at least 20 people, police and medical sources said. - REUTERS/Ahmed Saad

During the night of July 18, Iraqi forces raided several Baghdad nightclubs and attacked and arrested the club owners and workers.

The Iraqi Interior Ministry apologized July 20 and released the detainees in an attempt to avoid domestic and international criticism.

Such behavior recalls previous attempts on the part of security forces to undermine certain freedoms. Islamist movements have based such activities on religious texts since their emergence with the faith campaign launched by Saddam Hussein’s regime in 1992 and their arrival to power after 2003. They have gradually and successfully applied their strict instructions across Iraqi provinces, with the exception of Baghdad and the Kurdistan Region.

Despite official declarations such as that of Prime Minister Haider al-Abadi July 20, the attacks and violations have not stopped. Before storming the nightclubs, a military force raided the Union of Writers Club in Baghdad June 19 and attacked a group of writers on accusations of alcohol consumption.

On July 25, an unidentified military force stormed a family restaurant in central Baghdad and attacked patrons.

The rule of former Iraqi Prime Minister Nouri al-Maliki (2006-2014) witnessed an array of similar attacks that targeted the same type of sites as well as liquor stores. These places are currently confined to the Karrada district of central Baghdad by the constant attacks against them elsewhere and amid the spread of a religious tide in the rest of the capital’s districts.

Some of these attacks have turned deadly. In July 2014, armed militias carried out a terrifying massacre, killing about 30 women in a residential apartment in Zayouna district in eastern Baghdad that they claimed were showing "immoral behavior."

In the latest incident, as in all of the previous ones, the Interior Ministry formed a committee under Abadi's direction to investigate the issue, but no investigations have been announced, and the ministry has not produced any perpetrator of an attack on public freedoms for prosecution, implying some sort of solidarity with the perpetrators.

Meanwhile, the Interior Ministry claimed that bars and nightclubs are under constant attack because they were never granted official licenses to conduct business.

Such licenses are usually granted by the Iraqi Ministry of Tourism, which, ever since the change of the political system in Iraq after the US occupation in 2003, has granted no official licenses to sell alcohol or open establishments dedicated to alcohol use. Iraq's Law No. 6 of 2001 regulates these places and was preceded by Law No. 82 of 1994.

The Iraqi parliament has not discussed any new law regulating this industry following 2003, leaving the previous laws in effect despite being adopted during Saddam's faith campaign in a bid to court religious movements.

However, in the new Iraqi era, the 1994 law, which regulates the granting of licenses to such places based on certain regulations and limits these licenses to “non-Muslim” religious minorities, has not been applied.

The Baghdad Provincial Council, in a rare reference to 2009, when the issue was discussed in the Iraqi Parliament, accused the Ministry of Tourism of not granting liquor-sales licenses for Sharia reasons.

Since the religious movements gained power, they have found opportunities to further their interests in the Ministry of Tourism. Liwaa' Smaysem, the former minister of tourism and antiquities in Maliki's government and a member of the Sadrist movement, faced a wave of criticism in December 2014 when he described Iraq’s monuments as “idols,” the religious idea upon which Islamic State leader Abu Bakr al-Baghdadi justified destroying a large number of Iraqi antiquities in Mosul.

Religious parties and movements describe the civil, cultural, artistic and media activists who call for the protection of public freedoms as defenders of nightclubs, despite the Iraqi Constitution itself stipulating the protection of the freedoms they defend.

Religious movements are trying to derail civil society efforts to defend public freedoms by defining them as defending liquor sales and nightclubs.

The ongoing violation of public freedoms might lead to further clashes with the civil forces in Iraq, which are still fighting for the protection of freedoms in Baghdad, Erbil and Sulaimaniyah after they were defeated in many other cities amid the religious tide.

The government's failure to impartially manage the natural conflict between civil and religious powers, blind eye to these attacks and failure to hand over the perpetrators to justice suggest to some a conspiracy between it and the clergy and extremist movements.

All these factors point to the government’s true position on democracy in Iraq and raise questions about whether democracy was just a temporary slogan used to transition to religious rule.