Can Iraq separate religion and state?

Campaigns against social activity in Iraq call for a state that imposes its own rules and where Islamic factions have no power or influence. 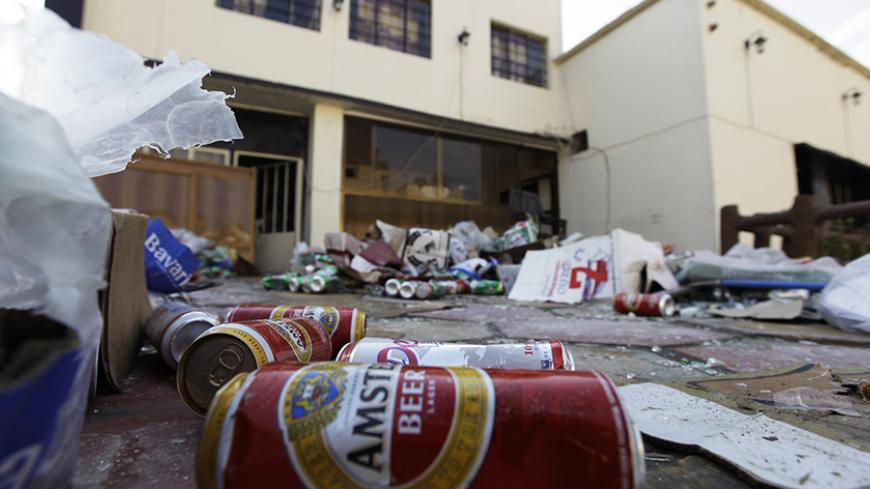 Beer cans are seen on the ground at the Ashurbanipal cultural society in Baghdad after an attack, Jan. 16, 2011. Men armed with steel pipes last week raided the Christian social club boasting a bar and vandalized liquor shops in Baghdad. - REUTERS/Saad Shalash

Several groups appear to be vying to control Iraqis' social lives and liberties: organized crime, religious factions and even armed security forces. Motives range from money to fundamentalism, but the situation calls for governance where armed parties and factions are no longer allowed to meddle in social affairs.

On Jan. 25, flyers calling for bans on singing and makeup were plastered throughout Baghdad on cement barricades, near security checkpoints and on the walls of the Zora Gardens that families in Baghdad frequent. This seemed to be an organized campaign against liberties, and it led to great controversy in the media, social networking sites and Iraqi society as a whole.

Questions abounded about the motives of said campaign and what party stood behind it. However, the perpetrators’ failure to identify themselves does not mean they were unknown to most Iraqis: They are supposedly religious conservatives who treat with disdain any ideas not in line with their views.

Some incidents are also perpetrated by security forces charged with enforcing the law and protecting liberties under the constitution. On July 20, a video clip emerged showing a security force storming night clubs in Baghdad, an act that led — along with similar such incidents — to widespread condemnation on the part of civil movements and leftist parties.

Some clerics publicly endorsed this type of behavior, such as Shiite Sheikh Ali al-Yassiri from Babil, who told Al-Monitor, “It is our duty to enforce Islamic law by closing down clubs where singing and dancing take place.”

Shawan Daoudi, a member of the parliament’s Culture and Information Committee, told Al-Monitor that “the Iraqi Constitution provides individuals the freedom to act,” though he admitted to the existence “of religious extremists who control the streets and seek to impose their will.”

Daoudi also called on the state to “remain steadfast in protecting recreational places,” as Iraqi Prime Minister Haider al-Abadi did when he demanded in July that “perpetrators be held accountable for their actions against hotels and public property.”

It is noteworthy that Abadi’s statements came in the wake of the Iraqi security forces’ July 20 raid on the Palestine Hotel in Baghdad forbidding alcoholic drinks. This pushed Iraqi Minister of Interior Mohammed al-Ghabban to meet that same day with the chairmen of the hotels and social clubs’ administrative boards and to lock up security officers for “abuse of power.”

The scope of the attacks goes beyond social clubs that cater to dancers and singers to include an attack by anonymous armed gunmen on the headquarters of the General Union of Writers and Authors in Baghdad in June.

In its search for religious groups endowed with military capabilities, Al-Monitor uncovered strange and interesting information. Gen. Salah Hussein from the Interior Ministry told Al-Monitor that there are “armed factions that extort club owners.”

For his part, Iraqi Media Network journalist Salam al-Shaykh revealed new information to Al-Monitor when he said that “some members of those armed factions were paid off by clubs to leave them alone.”

Islamic factions have been conducting such anti-civil rights and anti-secularism campaigns since 2003, when Saddam Hussein’s regime was overthrown.

In July 2004, liquor stores, beauty salons and music stores were attacked in Baghdad by anonymous people. Clerics issued supportive statements, such as Hassan al-Tai from al-Sadr city in Baghdad who told the BBC, “Those who consume alcoholic drinks must be flogged, and those selling such drinks must be cautioned, prior to their stores [being] razed to the ground.”

So why have such social clubs, particularly nightclubs, proliferated since 2003 despite the harassment they are subjected to?

Shaykh said, “Organized crime gangs in Baghdad have become venture capitalists that invest in clubs, as some members thereof admitted on satellite TV channels.” He said gangs that control clubs are paying off armed individuals not to attack these same clubs.

But Qassim Hussein Salih, the founder and president of the Iraqi Psychological Association, indicated to Al-Monitor the presence of other factors for the clubs' continued popularity.

“The Iraqi psyche has an innate affinity to singing and merriment, even at the darkest hours,” Salih said. “Iraq’s countryside is known for its singing and dancing, as this is where gypsies are located whose lives revolve around the commercialization of song and dance. In that sense, Iraqis are trying to psychologically substitute their tragedies with joy.”

At the end of December, the country held its first beauty pageant in 43 years. The event featured dancing and singing, and the participants were judged on the usual physical attributes — and later received death threats.

In this regard, Iraqi writer and social affairs researcher Makki al-Sultani told Al-Monitor, “Acts of deterrence and intimidation shall not prevent the holding of social events, particularly when it comes to singing and drinking. For any forced restrictions imposed on such activities will lead to people secretly indulging in them.”

But these campaigns aim at Islamizing society and hindering any form of secular activity, particularly social clubs, which the religious factions view as manifestations of immorality and debauchery that must be opposed at any cost.

Previous examples include an incident in March 2010, when a hand grenade was tossed by unknown assailants inside a billiards hall that served alcoholic drinks in Basra's al-Shaar neighborhood, injuring eight people. In 2012, Iraqi activists said that governmental and religious authorities were standing against some youths for imitating the Western lifestyle because they “threatened Islam and social ethics.”

Iraq is not an exception when it comes to the actions of conservative and extremist factions that seek to establish a state in accordance with Sharia. Such activities take place in many Muslim societies, such as Bahrain, Iran, Saudi Arabia and Jordan.

This trend is opposed by civil parties and factions, which exacerbates the internal conflict between the two camps and threatens social peace. Perhaps the best solution lies in a government not influenced by those factions.

Historically, the first social club in Baghdad was Al Alawiya Club, established in 1924, while the first national beauty pageant in Iraq was organized in 1947. A people with this kind of heritage would be better served by the protection of liberties and individual choice.