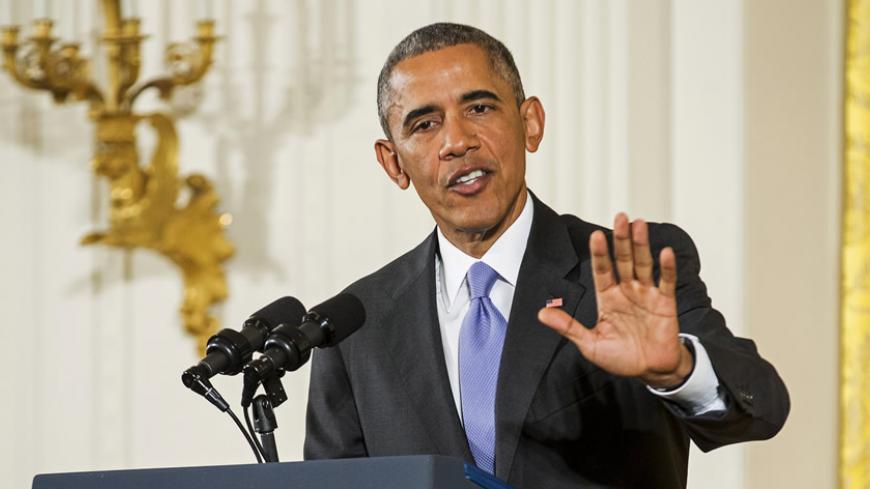 US President Barack Obama speaks during a news conference about the recent nuclear deal reached with Iran, in the East Room of the White House in Washington, July 15, 2015. - REUTERS/Joshua Roberts

US President Barack Obama this past week called on America’s Arab allies to begin a “practical conversation” with Iran to reduce sectarian divisions and address shared threats from terrorism.

Although Obama stressed that the purpose of the Joint Comprehensive Plan of Action (JCPOA) signed between the P5+1 countries and Iran on July 14 was to prevent Iran from a nuclear weapons breakout over the next 10 years, not to change Iran’s behavior, he also made clear that the region needs a new approach and attitude toward regional security.

Obama told Thomas Friedman of The New York Times on July 15, “What I think is undeniable is that the sectarian forces that have been unleashed are adding to the viciousness and destructiveness of what’s happening in a place like Syria, what’s happening in a place like Yemen, what’s happening certainly in Iraq. And that our best chance at least reducing the scope of those conflicts is for the Saudis and other Sunni states or Arab states to be at least in a practical conversation with Iran that says, `The conflict we are fanning right now could engulf us all in flames.’”

Obama made clear that while the United States is committed to deeper security cooperation with its Arab Gulf allies, those states must also address their own issues of accountability and governance.

“America has to listen to our Sunni Arab allies, but also not fall into the trap of letting them blame every problem on Iran. The citizens of more than a few Arab Gulf states have been big contributors to Sunni jihadist movements that have been equally destabilizing,” he said.

Obama added, “You weep for the children of this region, not just the ones who are being displaced in Syria, not just the ones who are currently suffering from humanitarian situations in Yemen, but just the ordinary Iranian youth or Saudi youth or Kuwaiti youth who are asking themselves, `Why is it that we don’t have the same prospects [as] some kid in Finland, Singapore, China, Indonesia, the United States? Why aren’t we seeing that same possibility, that same sense of hopefulness?’ And I think that’s what the leaders have to really focus on.”

Iranian Foreign Minister Mohammad Javad Zarif emphasized the possibilities for regional cooperation in an interview with Ali Hashem shortly after concluding negotiations over the JCPOA in Vienna.

“So now my call to our friends and brothers in the Persian Gulf, in the broader Arab world, is that Iran is ready to engage in good faith with all of them based on mutual respect, good neighborliness and Islamic brotherhood. We have many common challenges to fight, and we have many common opportunities to benefit from, and this is [the] time to start working together, and this [is] my government's most important priority right now. To engage with neighbors, to expand relations with neighbors, to cooperate with neighbors against our most common challenges, and extremism and terrorism are the most important challenges to our region,” Zarif told Al-Monitor.

Zarif had harsher words for Israel, claiming that “peace is an existential threat to them,” and that the deal “will remove a smokescreen [behind] which Israel was standing and hiding its criminal activities against the people of Lebanon and the people of Palestine.”

Ben Caspit reports this week that Israeli Prime Minister Benjamin Netanyahu “will have to make a very difficult decision over the next few days: whether to continue fighting the nuclear agreement with Iran with all his strength and, according to his spokespeople, ‘kill himself’ over the vote in the US Congress or accept defeat and try to leverage something for the benefit of the security of the State of Israel.”

Akiva Eldar writes that Netanyahu, whose opposition to the Iran nuclear deal has contributed to a deterioration in US-Israel ties, “will bear sole responsibility for its failure.”

Eldar adds, “The defeat in the campaign to foil the Iranian plot to destroy Israel, as Netanyahu claims, will bear his name. The man who chose to personally lead one of the most difficult and intricate diplomatic missions that Israel has undertaken since its inception — if not the most difficult and intricate of them all — will bear sole responsibility for its failure. But we will all pay the price for the deep erosion in the estimation of Israel’s international influence and of the wisdom of its leaders.”

Mazal Mualem reports that Netanyahu may alternatively consider the Iran agreement as a political opportunity: “It is possible that Netanyahu considers Israel’s anxiety over the nuclear agreement with Iran as an opportunity to advance a common agenda shared by him and [Isaac] Herzog, and thereby bring the Zionist Camp into the government.”

In another Al-Monitor article, Eldar argues that the agreement should be a different type of opportunity for Netanyahu: “Removing the Iranian threat from the headlines would make way for dealing with the constantly increasing threat of Israel becoming a binational state or an apartheid regime within less than a decade. In recent years, Netanyahu has engaged the world with curbing the Iranian nuclear program, demanding an ever-stricter sanctions regime. In the coming years, the world might be engaged in curbing the Israeli occupation regime and demanding tighter sanctions against the settlements.”

Although Obama said in his interview with Friedman, “I’m prepared to go further than any other administration’s gone before in terms of providing them additional security assurances from the United States,” Netanyahu was not reassured after speaking July 14 with the US president who, according to the White House, “underscored his Administration’s stalwart commitment to Israel’s security and noted that the JCPOA will remove the specter of a nuclear-armed Iran, an outcome in the national security interest of the United States and Israel … and that today's agreement on the nuclear issue will not diminish our concerns regarding Iran's support for terrorism and threats toward Israel.”

Caspit reports, “Many in Israel’s defense establishment think Israel should accept the US offer [of a security compensation package], call a halt to its stubborn and hopeless public fight with Obama and start preparing for 'the day after.' The prevailing assessment in the Israel Defense Forces (IDF) and other security agencies in Israel is that the nuclear agreement in itself is not terrible and that it does, in fact, defer Iran’s nuclearization for 10 or 15 years, at least.”

Caspit observes that some Israeli officials have received “veiled messages” that “Israel’s continued war against the US administration will ultimately seep into the thriving US-Israel security relations.”

Israel’s Defense Minister Moshe Ya’alon told Caspit on July 13, “On the question of cooperation and everything to do with intelligence, reports and updates, everything is alive and well. The Americans have been busy with the minute details over the past few days, so the updates haven’t been as frequent as they were in the past, but that doesn’t make much of a difference. We have an open debate with the Americans over principles. We think one way. They think the other way. Time will tell who was right.”