Netanyahu threatens to 'kill himself' in order to stop Iran deal 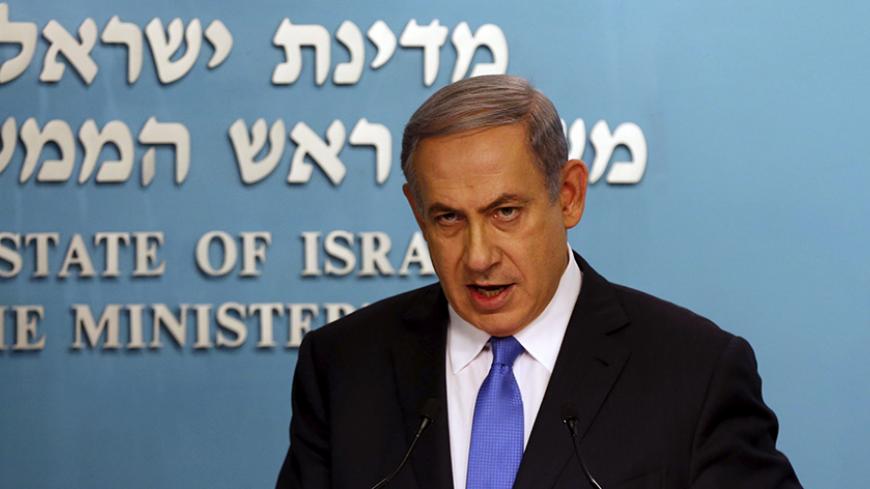 Prime Minister Benjamin Netanyahu will have to make a very difficult decision over the next few days: whether to continue fighting the nuclear agreement with Iran with all his strength and, according to his spokespeople, “kill himself” over the vote in the US Congress or accept defeat and try to leverage something for the benefit of the security of the State of Israel.

Netanyahu’s record over recent years does not augur well for those who feel that Israel should do an about-face. There are those Israelis who feel that Netanyahu should cut his losses and take advantage of the situation to wrest a defense compensation package and a strategic cooperation/coordination deal from the United States. Netanyahu has repeatedly refused to succumb to tempting offers sent out by the US administration and refused to engage in serious negotiations on the issue. Netanyahu, a compulsive gambler, is now verging on being suicidal. The problem is that he is doing this in the name of an entire country.

In recent months, Israel has received several worrisome messages from the United States. These were not sent by official sources in the administration nor by American officials in active service, but by unofficial friendly sources: members of research institutes connected to the Pentagon, Jewish American leaders who enjoy access to Washington and people close to the White House or the State Department. The messages were sent by the administration indirectly to allow it to publicly deny involvement should the information leak out, but the insinuations are clear. According to the veiled messages, Israel’s continued war against the US administration will ultimately seep into the thriving US-Israel security relations. It is simply inconceivable, so it was said, that Netanyahu and his Defense Minister Moshe (Bogie) Ya’alon should continue their all-out war against the president’s policies (mainly regarding negotiations with Iran) without ultimately damaging the security coordination not only between Israel-US defense authorities, but also between security professionals on the ground.

This trend has already been expressed in various forms. In the course of the Protective Edge campaign, the United States held up the transfer of ammunition, especially the Hellfire air-to-surface missiles for Apache attack helicopters that the Israel Defense Forces needed. An Israeli security source recently told Al-Monitor that over the last year, the United States changed its procedure for authorizing Israeli requests for defense arms acquisitions. While weaponry had been previously shipped to Israel via direct channels in the Pentagon, now any Israeli request must, after the Pentagon’s approval, also be authorized by the White House National Security Council. This adds another bureaucratic step and opens the door to additional deliberations, contributing to the delay. It's a heavy hint.

In the speech he delivered yesterday after the signing of the nuclear deal with Iran, President Barack Obama emphasized his “unprecedented” work to strengthen Israel's defense. For now, the president is right on target.

On the night of July 14, after the nuclear agreement had been achieved, Obama called Netanyahu, putting an end to weeks of disconnection between the two. Israel has barely been updated by the United States about advancement of the negotiations in recent weeks. In the very last leg of the powers' journey toward the agreement, Israel found itself isolated in a corner, ostracized and lacking all influence — exchanging places with Iran.

The conversation between Netanyahu and Obama (according to diplomatic sources privy to it) was not easy, to say the least. Netanyahu did not hold back his scathing criticism of the agreement and its consequences. Publicly, Netanyahu called the proceedings in Vienna a “historic mistake,” but American diplomatic sources emphasized on the condition of anonymity Tuesday that “No one listens to Netanyahu any longer.” That is not completely true. Most Israelis listen to Netanyahu, as do some worried Sunnis in the Middle East. People in Cairo, Riyadh and Amman do, too, as do those in a few other places in the Middle East. But in addition to listening, they can also take their fat wallets out of their pockets and start to grope their way to their own nuclear bomb.

In the words of a senior Israel security source who spoke on condition of anonymity, “There is no way that a Shiite bomb in the Middle East will not be greeted by the other side by a Sunni bomb.” Obama and Secretary of State John Kerry have a ready answer to this: Indeed, that's the whole point of the deal; that in the next 15 years, there will be no Shiite bomb. And then they might add it is exactly what this agreement guarantees. The alternative was much worse.

Netanyahu convened the security Cabinet on Tuesday night. Ridiculously, the entire Israeli Cabinet voted unanimously against the agreement, rejecting it — as if anyone thought Israel’s Cabinet had any say regarding the deal. This, of course, provoked sneers outside of Israel, especially among the Europeans.

The deal put an end to the Israeli military option of bombing the nuclear installations in Iran, the option that has cost the Israeli taxpayer many billions of shekels. Israel announced yesterday that it is “not bound by the agreement” — another odd comment for a country that is not party to the deal. In the West, the guess is that Israel will adopt massive intelligence efforts in the coming years to pinpoint Iranian violations of the agreement.

Professional security sources who spoke at the Cabinet meeting closed ranks in line with the view of the country’s diplomatic echelons: that the deal is a bad one that turns Iran into a tremendous terrorist power that will spend hundreds of billions of dollars to fuel conflicts in the Middle East and back various Shiite agents, from Hezbollah to the Houthis in Yemen. Nevertheless, there are also those in Israeli intelligence who are cognizant of some advantages of the agreement, one of which turns the clock back on the Iranian nuclear project for more than 10 years.

The most scathing Israeli criticism of the agreement, including that from military officials, is directed at the deal's verification mechanism and especially Articles 74-78. The problem is mainly with the inspection of some sites, either suspicious sites or new sites with which the West is not familiar. The initial US demand was for invasive and immediate monitoring of nuclear facilities, anywhere and under all circumstances.

What was finally agreed on should concern all peace-loving individuals: It will take 24 days before the powers can come and inspect a suspicious site, and even this will take place only after consulting with the Iranians and voting in a forum that will include Iran and the world powers. “Iran has a track record of establishing secret nuclear sites; it did this in Fordow and Natanz. These sites were revealed to the world due to Western intelligence agents and the Iranian opposition. Now they are getting another opportunity to deceive [the West], this time under the aegis of ‘inspection,’” said a high-ranking Israeli military source, speaking to Al-Monitor on condition of anonymity.

Netanyahu has been working against the Iranian nuclear project for 20 years already. He claims to have been the first to identify the threat, rouse the Western world and raise the issue on the public agenda. There is a kernel of truth to these pats on the back (although, truth be told, it was late Prime Minister Yitzhak Rabin and not Netanyahu who first pinpointed the Iranian threat). The problem is that Netanyahu did not carry out his key promise to his constituents.

According to Netanyahu’s own view of the situation, Iran became a "nuclear threshold state" on Netanyahu’s own watch. Netanyahu's joining the Republicans in an attempt to subvert Obama or prevent the president from signing an agreement with Iran was a resounding failure. Netanyahu began his defensive self-justification campaign in a Tuesday evening television appearance. No matter what happens now, Netanyahu will have to find himself a new agenda.