Bibi, king of the Jews

In opposing the Iranian nuclear deal, Prime Minister Benjamin Netanyahu sees himself as the savior of the Jews, a perception that leads him to view the American Jewish community as within his jurisdiction, rather than as US citizens with an understandable loyalty to their country and president. 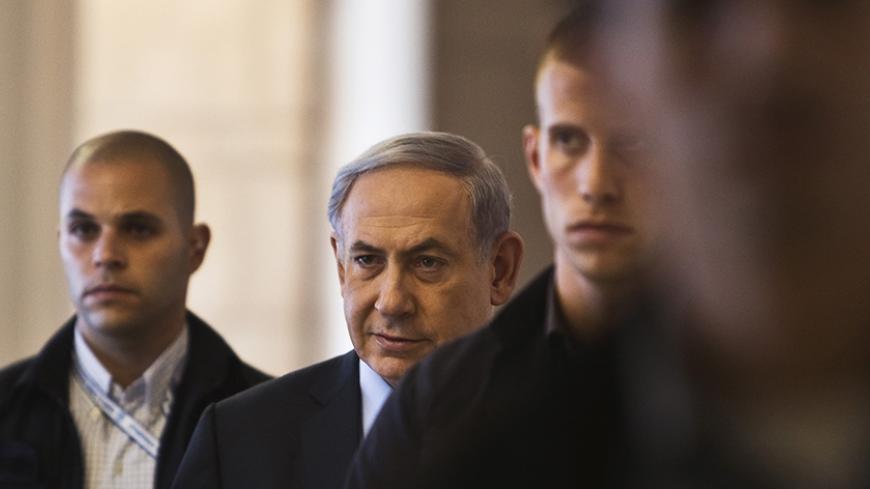 “Netanyahu took preventive measures,” I was told Aug. 9 by one of the people closest to the Israeli prime minister on condition of anonymity. I asked what he meant by that. “Bibi realized that President Obama was going to appeal to American Jewry above his head,” the source explained, “so he rushed to beat the president and lecture to thousands of Jewish activists,” during a Aug. 4 webcast organized by Jewish groups in North America.

This is how the prime minister’s friend summarized the dueling speeches delivered by Prime Minister Benjamin Netanyahu and President Barack Obama, and how he described the mood that prevails in the immediate vicinity of Israel’s prime minister. Netanyahu is going for broke in his confrontations with the US president. The prime minister uses intelligence provided by his extensive Jewish-American contacts to anticipate the president’s next moves and prepare competing answers. Obama intends to invite prominent Jewish leaders in America for a talk? Then I’ll speak live via the Internet to thousands, maybe tens of thousands of American Jewish activists.

There’s something else going on here, however, something deeper and latent in the way people around Netanyahu use the expression “above Netanyahu’s head” when they talk about American Jewry. In saying “Obama is poised to talk to American Jewry above Netanyahu’s head,” the starting assumption is that American Jewry are, in fact, in Netanyahu’s area of jurisdiction. They are presumed to reside in his domain, and anyone who appeals to them without prior notification or authorization does so “above the head” of the responsible adult, Netanyahu. The reality, of course, is quite different.

"Why do you say 'above his head?'” I asked Netanyahu’s associate, pointing out that American Jews are US citizens. Their duty is to be loyal to the United States of America, not to Netanyahu or Israel. Yes, they can support Israel and help Israel in America, but they cannot prefer Israel over their native country. Their president is Obama, not Bibi. Remember Jonathan Pollard, the convicted American spy for Israel.

“I well remember Jonathan Pollard,” my source responded. “But we are in a different situation now. Before Pollard, it was true — American Jews were obliged to be loyal to the United States and the president. But before the ‘destruction of the Third Temple,’ they are beholden to the Jewish nation. This is a historic event, they cannot remain on the sidelines.” This is the heart of the story, the “nuclear reactor” fueling the conflict between the president of the United States and the prime minister of Israel. This reflects Netanyahu’s precise state of mind: that the Jewish people are facing the “destruction of the Third Temple,” that is, the annihilation of the State of Israel, the third sovereign Jewish national entity. No less.

The Iranian nuclear project threatens the existence of this Jewish entity, a direct existential threat, palpable and crushing. This is not a political battle between two leaders who cannot stand one another. This is not an academic debate or another security-diplomatic round of negotiations that might succeed or fail. Rather, this is a “to be, or not to be” war on the Jewish homeland, a war for the very existence of the Jewish people. No Israeli leader could keep silent in the face of events of such historic proportions. Certainly not Netanyahu, who views himself as destined, from the day of his birth, for this truly messianic mission.

This is the reasoning behind Netanyahu’s unprecedented state of mind that causes him to ignore all the background noise, dangers and gambles along the path he has chosen. He cannot hear those within the Israeli defense establishment who say that the agreement with Iran contains some positive aspects. Amir Oren published an article in Haaretz confirming reports in earlier Al-Monitor articles of mine that there are some in the Israeli intelligence apparatus who think that the agreement is not so terrible. Netanyahu also ignores the Israeli defense establishment that pleads with him, literally begging him, to enter into negotiations with the Americans for a large “compensation package” and invest some thought in the “day after” instead of continuing his scorched-earth war from the “day before.”

When people try to explain to Netanyahu that the agreement is a done deal, he reacts furiously. He will not back down. He will fight until the end. This insistence reflects a fatalistic, messianic, alarmist worldview in which everything is either black or white, overlooking that most of life is conducted amid shades of gray. To those who practically risk their lives in trying to discuss this with Netanyahu, the prime minister responds that Israel has nothing to talk about with the Americans at the moment. In half a year, Israel will receive everything it can get now, he says.

In Netanyahu's view, the Americans will compensate Saudi Arabia and the Gulf states for the agreement, and then they will be forced to compensate Israel as well to preserve their long-standing commitment to Israel’s “qualitative military edge.” No, Netanyahu is not worried about the compensation package or about planning for the day after. “There are not enough stealth squadrons in the world that can compensate the Jewish people for a nuclear bomb in Iran,” Netanyahu says. “There is no sum of money or security coordination that can offset the tangible dangers facing Israel and the entire world from this agreement.”

Thus, Netanyahu not only views himself as the person sent by divine providence to save the Jewish people from the Iranian bomb, but also as the person chosen to save the entire world. His father, Benzion Netanyahu, did this before him. During the course of World War II, he joined the Republicans to confront President Franklin Roosevelt and pressure him into assisting European Jewry, who were being destroyed. Netanyahu’s grandfather Nathan Mileikowsky tried a similar route, but it never went anywhere. Evidently, this is a family thing, transmitted in the genes from generation to generation, giving them the ability to pinpoint the terrible dangers lying in wait to ambush humanity and to deliver the world from these evil clutches.

This is the mindset guiding Netanyahu. To some, he appears to be a messianic and grotesque figure, but to others, his perceptions stem from an authentic and realistic place. At any rate, according to opinion polls, the Israeli public overwhelmingly​ supports its prime minister. Whether he fails or succeeds, there is, at the moment, no one else but him.