Why Bibi snubbed Obama and is skipping next week's AIPAC conference

Prime Minister Benjamin Netanyahu decided to cancel his US trip so that he could avoid meeting with both President Barack Obama and the US Jewish community. 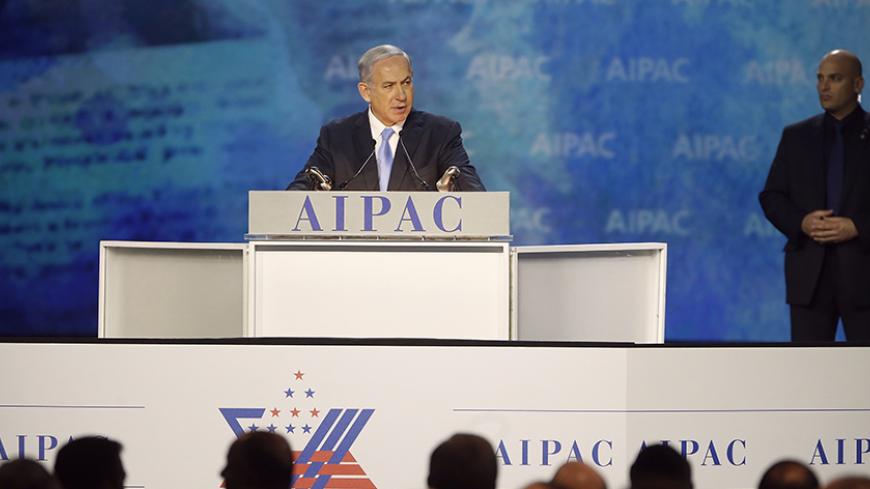 To explain Prime Minister Benjamin Netanyahu’s decision to forego a meeting with US President Barak Obama, associates of the prime minister noted to Al-Monitor the US primaries and Netanyahu’s desire to avoid being dragged into the ruckus surrounding them. While there is some truth to this excuse, given on condition of anonymity, it is not exactly high on the list of the real reasons. What is taking place in the US primaries has caused great consternation to Netanyahu as well as his American political patron, casino mogul Sheldon Adelson. In contrast to the previous presidential contest, during which Adelson sunk many millions into the candidacy of Newt Gingrich before skipping over to Mitt Romney’s camp and investing $100 million in him, this time, Netanyahu and Adelson are waiting to see which way the wind would turn. The problem is that the wind has swirled in a crazy direction. No one in Netanyahu or Adelson’s circles had dreamed of Donald Trump's rise. Now they are beginning to get used to him, as reflected in the tone of the articles in Israel Hayom, the pro-Netanyahu newspaper financed by Adelson.

Netanyahu had two more important reasons that induced him to skip the meeting with Obama on March 18 and waive an appearance before American Israel Public Affairs Committee (AIPAC) the following night. One was a diplomatic reason, the other was political-religious.

The diplomatic reason is connected to the discussion over a memorandum of understanding between Israel and the United States that will determine the dimensions of the military aid package from the United States to Israel in the decade starting in 2017. Currently, Israel receives about $3 billion a year in security aid. Following the nuclear agreement with Iran, Israel hoped to upgrade the package to more than $4 billion. However, Netanyahu refused to open contacts while the US administration was willing to meet it halfway (in the middle of last year), in order to wage his hopeless struggle against ratification of the nuclear agreement in Congress.

Now, the prime minister finds himself in a hopeless situation.

The Americans are agreeing to ramp up assistance, but not to the level that Israel wants. The gaps remain, and chances that they will be bridged are low. Israel demands $4 billion a year, not including special assistance for the development of its various interceptor programs, including the Magic Wand (David’s Sling) and the Arrow missile. They are intended to complete Israel’s aerial protection against long-range rockets and missiles. The support needed for these projects comes to hundreds of millions of dollars a year, meaning that what Israel really wants is assistance close to $5 billion, all told. The Americans are willing to enlarge the aid to about $4 billion total. This is a significant gap.

Netanyahu is still determined to postpone the agreement to the next president’s term of office, despite Vice President Joe Biden begging him last week when he was in Israel to sign it during Obama’s term of office. Netanyahu has his reasons. The prime minister is concerned about a “diplomatic ambush” from Obama during his last few months in office. He fears something along the lines of the Clinton Parameters that President Bill Clinton set out in the last few days of his term of office.

Netanyahu reckons that the president would find it easier to carry out such a move if a military aid package for the next decade is signed. A well-publicized signing ceremony would remove the anti-Israeli image that Netanyahu has painted on Obama in recent years. Simultaneously, it would allow the American president to leave behind a diplomatic legacy. Those close to Netanyahu assess that if the sides do not reach an agreement on military aid, it will be harder for Obama to embark on a diplomatic campaign. He will need something to show his even-handedness, Netanyahu’s people think, because he won’t want to harm Hillary Clinton’s chances at the presidency and he won’t want to go down in history as an anti-Israeli president.

Netanyahu, who was a cautious and calculating leader for most of his career, has become an out-of-control gambler in the last two years. Success has gone to his head and his closeness to Adelson and his unlimited financial resources have given him a false sense of security. After he lost his wager on US presidential candidate Mitt Romney, Netanyahu went on to fail in his Iranian policy and then gambled again to try to avert congressional authorization of the agreement. He failed yet again — but each time he keeps raising the bar one more notch.

An Israeli minister told Al-Monitor last week on condition of anonymity that Netanyahu is endangering Israel’s most important strategic interests. “It could happen that Trump will be president and he’ll reassess the whole business of American support all over the world. We could even find ourselves with zero support due to Netanyahu’s shenanigans,” he said.

So, to avoid finding himself being dragged into signing the memorandum, Netanyahu decided to miss the presidential meeting. At the moment, his coalition is more important to him than military aid. He founded a narrow right-wing government, and a political tremor could dismantle it.

The second reason that impelled him not to travel to the United States at this time is also connected to these political interests: In January, the Israeli government reached a historic compromise and allotted Reform and Conservative Jews a special, separate prayer space opposite the Western Wall, Judaism’s holiest site. This compromise passed a government vote, but also let an ancient genie out of its bottle. The ultra-Orthodox parties, without whom Netanyahu cannot maintain his government, are now threatening to dismantle the coalition unless he agrees to their demand to amend this historic agreement. This is the same agreement that is viewed by world Jewry as a reconciliatory step taken by the Jewish state controlled by an Orthodox establishment with most of the world’s Jews, who are Reform or Conservative.

Netanyahu knows that if he attends the AIPAC conference at the end of this week, he would receive a warm and festive public welcome from the Reform and Conservative Jews. But it would be a dangerous bear hug. Netanyahu is a secular Jew, even a borderline atheist, and has no interest in all this hullabaloo. His worldview is decidedly non-Orthodox, but he is an experienced politician and his coalition would fall apart without the ultra-Orthodox. He fell into this trap against his will and at the moment, has no idea how to get through this impasse. The last thing he needs now is a public show of support by Reform Jewry, which will only further enrage his natural ultra-Orthodox coalition partners.

Netanyahu understands that sometimes, the best thing to do is simply stay home, disengage and pray for a miracle.