Is a Netanyahu-Obama accident waiting to happen?

While relations between Israeli Prime Minister Benjamin Netanyahu and US President Barack Obama are about to reach a breaking point, the shooting in Jerusalem of a right-wing activist risks provoking a regional explosion. 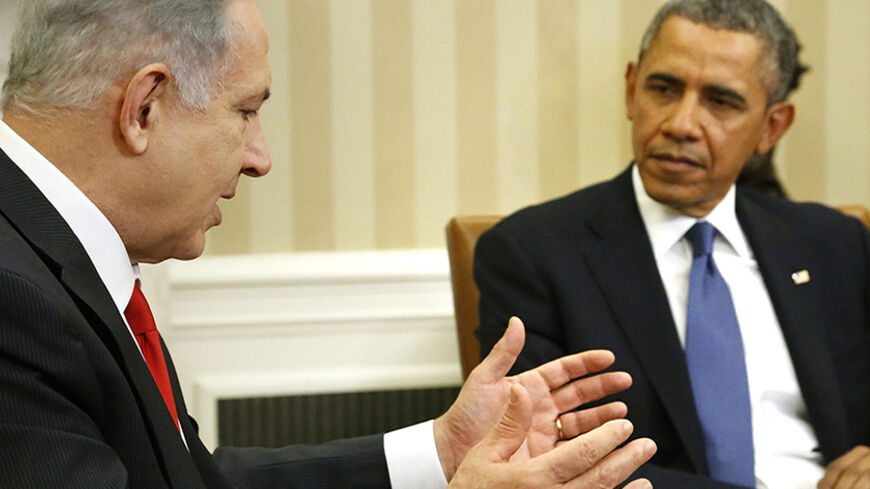 Israel's Prime Minister Benjamin Netanyahu (L) makes remarks as he meets with US President Barack Obama in the Oval Office of the White House in Washington, March 3, 2014. - REUTERS/Jonathan Ernst

The end of October was a particularly prolific week for two dangerous collision courses. The first one is the continual road accident between the United States and Israel, or more precisely, between the White House and the prime minister’s office. The second one is the deteriorating relations between Palestinians and Jews in Jerusalem, mainly in connection to the world’s most volatile place — the Temple Mount.

Both these courses have seen long strides toward a big bang. In Jerusalem, such a bang could deteriorate the entire region into a third intifada at best, or result in the first Armageddon in the worst case. In terms of the Israel-US front, such a bang could take place after the US midterm elections on Nov. 4. According to one scenario, should President Barack Obama lose these elections, he will turn into a lame duck. Wounded, he would become more furious than ever. As a result of not having a majority in either house of Congress, Obama would find the US domestic front is blocked off to him. Thus, he would remain only with foreign policy by which to leave his mark. Contrary to his nature and disposition, he would turn vengeful. He would want to settle a score with Prime Minister Benjamin Netanyahu, and especially with his patron, business billionaire and casino mogul Sheldon Adelson. Israel, as a result, might pay a stiff price.

Let’s start with the Israel-US arena. In recent weeks, the relationship between the Oval Office in the White House and the “aquarium” in the prime minister’s office has escalated into a real whirlwind. Even the hard-core pessimists in both offices would not have imagined, until a few days ago, that the situation could sink to such lows. It started with an exchange of implicit jabs that evolved into open diplomatic blows. These, in turn, intensified into blunt mutual accusations until both parties this week made a crash landing into a quagmire of cuss words. This spat now looks like a bona fide Billingsgate. What was surprising was the reaction of the American side, which is usually considered to be levelheaded and calculated. Having abruptly taken off its kid gloves, it described Netanyahu with a series of colorful and pejorative expressions, of which the term “chickenshit” became the hit du jour, starring prominently all over the Internet.

From an American standpoint, this was a spectacular own-goal, making Netanyahu a martyr on his own turf, the only one that truly counts for the Israeli premier. Once again, the Americans helped him to position himself as the champion of Israel’s ideological right wing — a status he has been losing in recent months to Minister of Economy and Trade Naftali Bennett. Taking the podium at the Knesset on Oct. 29, Netanyahu said unabashedly, “I am being attacked only because I am protecting the State of Israel.”

Most American officials involved in the tumult were livid when Jeffrey Goldberg’s story, with all of its high explosive content, was published. “That’s the last thing we needed,” one of them said. “This is something you just don’t do. It only helps Netanyahu.” This was the general mindset. By Oct. 29, the White House and the State Department pulled themselves together, disavowing Goldberg’s quotes. This, however, does not mean that these statements were not made. Everyone knows that, indeed, they were. (And in Israel, they are attributed to Ben Rhodes, President Obama’s close adviser.)

So, what ticked off the Americans? According to one theory, this was another joint venture, which they ascribe to Netanyahu and his patron Sheldon Adelson. Two years ago, these two people — assisted by Israel’s current ambassador to the United States Ron Dermer — joined forces to attempt to unseat Obama. Adelson put down some $100 million into this holy endeavor. On the eve of the US elections, Netanyahu hosted in his Jerusalem residence Republican presidential hopeful Mitt Romney. Adelson, Netanyahu and Dermer were convinced that Romney would win the elections. In their mind, they already envisioned “the day after.” They imagined how Israel would become the White House darling and how Netanyahu would become the man of the hour that put Romney in the Oval Office, using the money of his close friend Adelson.

The gamble failed. Incidentally, then-President Shimon Peres thought it was an abortive gamble. Being familiar with the American electorate and having political advisers slightly more in the swim, Peres knew that the gamble was doomed to fail. But Bibi (Netanyahu) would not listen to Peres. He preferred Adelson. Israel placed all its chips on the Republican layout. We all know how that turned out. The Democratic croupier collected the money.

As it turns out, Adelson still has a ton of money and Israel has still not learned its lesson. Over the past week we saw another episode in the ongoing saga, whereby Netanyahu and Adelson are trying to unseat Obama. This is taking place at the most critical juncture, with Obama fighting a rearguard action to salvage the second half of his term. The midterm elections will determine whether he will be able to leave a legacy behind, or whether he will be doomed, staggering toward the horizon, bleeding and all but paralyzed.

According to an Oct. 23 USA Today report, Adelson decided to throw himself into the ring again, funneling $5 million to the Republican election effort. Since the money is intended for the last week of campaigning, this is a substantial amount that could prove to be a tiebreaker. But Adelson wanted more. Two days later, as Obama was making a rare appearance in Wisconsin to support the efforts of candidate Mary Burke to unseat the incumbent Republican Scott Walker, Adelson funneled an additional $650,000 to the Republican election effort in that state.

These moves are regarded as another blatant “bounty” on the president’s head. Because the Americans consider Adelson and Netanyahu to be one (it also includes Dermer, aka “the Israeli ambassador to Las Vegas”), the linkage was quick and the conclusion simple: Netanyahu did not make do with the first attempt to unseat the president in 2012. He’s now practically trying to do it for the second time.

Seizing on the opportunity, Netanyahu is also trying to build himself. The prime minister has polls suggesting that the more he escalates the struggle with the Americans, linking it to the core of Jewish existence and the unity of Jerusalem, the more his approval ratings go up. And thus Obama, against his will, has become a political lever generating votes for Netanyahu, while also turning into a punching bag. This is inconceivable, and as far as the Americans are concerned, it is also intolerable. So, what will they do? We’ll have to wait for the results next week.

By January, Obama will have to decide whether or not to publicize Secretary of State John Kerry’s initiative and shove it down the Israelis' and Palestinians' throats. He will have to decide whether to continue casting an automatic veto against any anti-Israeli resolution, especially the initiative of Palestinian Authority President Mahmoud Abbas at the UN Security Council. As it turns out, the US-Israel relationship has still not hit rock bottom.

In Jerusalem, by contrast, the situation is more volatile. On Oct. 29, an Islamic Jihad militant, Mu’taz Hijazi, shot Rabbi Yehuda Glick in Jerusalem. Glick leads the Jewish movement that unites several organizations, all calling to renew Jews' right to pray on the Temple Mount. A well-known figure, he is very colorful and very provocative, even though he also fights for total freedom of worship for Muslims and Christians.

In recent years, the number of Jewish worshipers visiting the Temple Mount has considerably risen, triggering a violent and fierce Islamic counter-reaction that stages disturbances at the compound on an almost daily basis. Trying to conciliate the warring factions, the Israeli police intermittently open and close the Temple Mount around the clock to Jewish worshipers while trying to pour cold water on the conflagration. On Oct. 30, the police decided to close off the Temple Mount, and in a strongly worded statement, Abbas called the move a “declaration of war.”

Hijazi was a terrorist who served time in an Israeli prison. Upon his discharge, he said, “I’m going back to Jerusalem to be a pain in the neck of the Zionists there and to take part in the heroic struggle of Palestinians for Al-Aqsa.” Bizarre and terrifying as it may sound, he worked at the cafeteria of the Menachem Begin Heritage Center, the venue that hosted on Oct. 29 the event of the Jewish organizations headed by Glick. Hijazi ended his shift and waited for the event to finish. Riding a motorcycle, he pulled up close to Glick, fired a few shots at him and took off. The following day he was killed by the Israeli police and Shin Bet after opening fire at the troops who came to arrest him at his home in Abu Tor in East Jerusalem. According to associates, Hijazi had no intention of turning himself in or surrendering. He acted similarly to a suicide bomber.

Glick is now in the hospital and in “serious condition.” Since the shooting, he has been operated on several times as the doctors try to stabilize his condition. Anyone who finds relative quiet in the Middle East to be important should pray for Glick’s speedy recovery. If the murder attempt had succeeded, all of us here and around Jerusalem would have seen a spectacular shortcut to hell. A Jewish terrorist attack on the Temple Mount has always been the Shin Bet’s worst nightmare. The most common commodity in the Middle East is extremism. It is found in abundance on both sides, yet the brakes that should restrain it are wearing thin.