The closing of Al-Aqsa Mosque by the Israelis seems to be in line with the objective of a radical Jewish group to build a third temple in Jerusalem and replace the Jordanian authority at the compound. 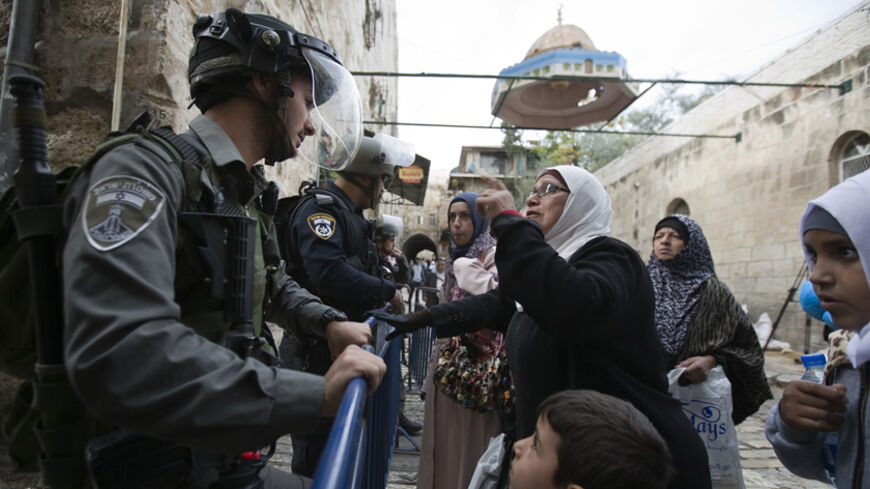 A Palestinian woman argues with an Israeli border police officer near the Lions Gate in the Old City of Jerusalem, Nov. 2, 2014. - REUTERS/Amir Cohen

The recent escalation of tension in East Jerusalem and especially in and around Al-Aqsa Mosque will most certainly confuse many. Why, some ask, would the Israeli government carry on an unprecedented act of closing off the entire mosque area to all but eight Muslim worshipers, only to reopen it the next day and appeal for calm?

The extreme Israeli action included the prohibition of the call for prayer, which has not happened since the Israeli occupation of the city in 1967. Israelis say they could not remain silent following the shooting of Yehuda Glick, a radical American-Israeli activist rabbi who has been calling for Jews to establish a permanent presence in the entire Haram al-Sharif, which is nominally under the joint control of unarmed Islamic Waqf (Jordanian) guards and well-armed Israeli security personnel.

Glick, a member of the small radical group of Jewish extremists called the Temple Mount Faithful, had just ended a lecture at the Menachem Begin Heritage Center titled “Israel returns to the Temple Mount” when he was shot by an unknown assailant who reportedly told him that what he had said at the lecture “really hurt me.”

Israel's police chief said that Al-Aqsa had to be closed because a “red line” had been crossed. Ahmad Rwaidy, a Palestinian lawyer and adviser to Palestinian President Mahmoud Abbas on Jerusalem affairs, rejects claims that the closure of the mosque was simply a reaction to the shooting of Glick. He argues instead that the Israeli decision was planned and awaiting an excuse to be carried out. The goals seem clear, as at every opportunity Israel is implementing changes to the status quo of the mosque compound, making it a de facto reality on the ground.

As expected, the closure of the mosque to the 300,000 Palestinians in Jerusalem produced angry and violent reactions from the population, as well as regional and international criticism that led to a quick reversal of the closure decision and a statement by Israeli Prime Minister Benjamin Netanyahu urging his fellow Knesset members to be restrained in their public statements.

The mix of local anger and external pressure, especially from the Jordanian royal palace, which is nominally responsible for the holy sites in East Jerusalem, appear to have succeeded in getting the Israelis to reverse their actions under threat of the abrogation of Jordan's peace treaty with Tel Aviv.

The lingering question remains whether this cycle of violence and restraint will continue, or whether both sides understand the absolute need to preserve the status quo.

Many observers of the nearly half a century of changes in Jerusalem will conclude that the likely explanation of the current situation can be summed up by the Israeli encroachment strategy. Fourteen years ago, when then-Israeli Prime Minister Ariel Sharon entered the Al-Aqsa Mosque in September 2000, Palestinians protested and the Israelis responded violently and closed the mosque to Muslims for a few hours. This time, the Israelis closed the mosque for a day and for the first time interrupted the Muslim call for prayer.

The ultimate goal of the radical Jewish group to “build the third temple in Jerusalem in their lifetime” and replace the nominal Jordanian Hashemite sovereignty over the mosque with unchallenged Israeli control was further emphasized by an anti-Jordanian statement by right-wing Housing Minister Uri Ariel, which elicited calls from the Jordanian government for an explanation.

Following the reopening of the mosque to Muslim worshipers, controversial deputy Knesset member Moshe Feiglin made a short "visit" to the mosque area under the protection of Israeli security, as if to say that he has not wavered in his plans.

Palestinians, on the other hand, appear unable to stop this Israeli encroachment policy and at best can try to slow it down or delay it. Israel's systematic efforts to deny Palestinians any connection to their natural leadership have produced new uncontrollable local leadership that carries individual acts such as the one against Glick. Without a central Palestinian leadership, Israel is much more vulnerable, as it has to deal with unorganized and hard-to-recognize ad hoc activists and small groups.

This Israeli effort to isolate Palestinians in Jerusalem from the rest of Palestine has made it impossible for any individual or group to act as an intermediary with the local community. The leaderless Palestinians of Jerusalem have therefore become political orphans who are acting with raw anger and rage but without a clear plan and strategy to channel this anger into a tangible policy. A much more concerted and unified effort is needed by Palestinians and others if the aims of the radical Jewish group to destroy the Muslim mosque and build a Jewish temple in its place are to be averted.