US willing to 'compensate' Israel on Iran deal

The United States doesn’t understand why Israeli Prime Minister Benjamin Netanyahu continues to focus on battling the Iranian deal and rejects two large and strategic “special interest deals” with the US administration. 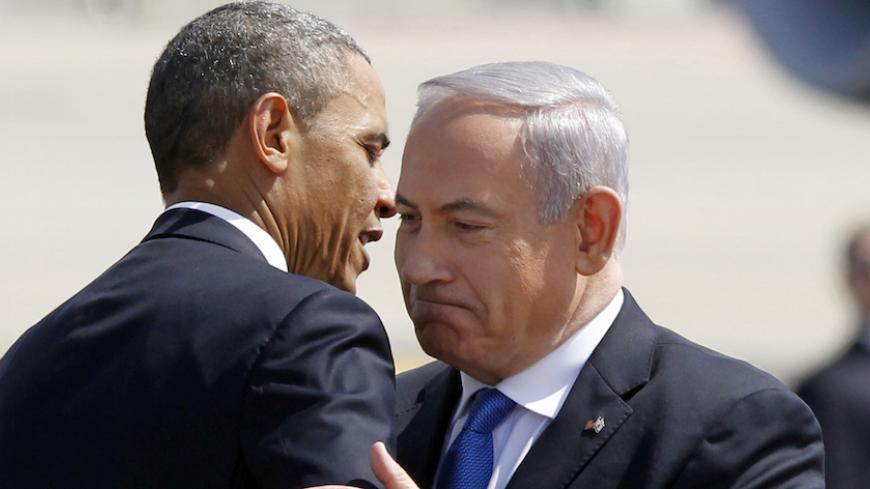 At the conclusion of a long, exhausting and beleaguered campaign, Israeli Prime Minister Benjamin Netanyahu will present his fourth government to the Knesset early next week. He will hope and pray that the Knesset will give him a vote of confidence. If, indeed, his fragile, narrow majority (61 Knesset members out of 120) passes the confidence vote, the government could hit the road. Numerous tasks wait for this government, and a considerable number of urgent problems need immediate treatment. Since October 2014, Israel has been running on autopilot without proper management: without a budget, without fully active ministers and without a steady, focused hand on the governmental rudder. On his way to victory in the polls, Netanyahu endangered many Israeli national interests. These include relations with the United States, domestic relations with Israeli Arabs and the state’s international image. Now the time has come to mend the fences.

The most urgent issue of all is that of relations with the United States. Since the elections on March 17, quite a number of US officials have visited Israel, including active members of Congress and former high-level officers of the administration. A summary of the conversations by these visitors with their Israeli hosts brings to light painful observations on the future of bilateral relations between Israel and the country that is perceived as Israel’s greatest ally, the United States.

“The personal relations between Netanyahu and [US President Barack] Obama have soured beyond repair,” a US source who is an expert on the topic said this week, in regard to the talks he held here with Israeli colleagues. “There is no chance to patch things up or turn the clock back. President Obama knows that Netanyahu has long since wiped him off the map. Netanyahu knows that President Obama knows, and both of them yearn for the day that one of them finishes his term of office. Most probably, it will happen first to Obama,” the US visitor said. This diagnosis was shared by almost everyone who was asked questions on the subject in recent weeks. “It is a poisonous relationship,” another US source said. “The two don’t believe each other, don’t care about each other and express no interest at all in changing the situation or believing that it can be changed.”

Note of caution: In politics in general, and in Middle East politics in specific, the rule is, “never say never.” Former Foreign Minister Avigdor Liberman, who only yesterday sat with Netanyahu and was viewed as Netanyahu’s ally, stormed Netanyahu May 11 with a pitchfork and called him a liar and a cheater in full view of the Knesset cameras. However, that will not prevent Liberman from returning to cooperate with Netanyahu in his fifth government (in another six months or two years), if he decides that such a move suits his political interests.

That’s the way it is in Israel, and it could be that that’s the way it is regarding the stable and magnificent relationship that used to exist between Jerusalem and Washington. For instance, Alon Ben-David, Israeli TV Channel 10's much-esteemed defense correspondent, reported May 8 that Obama told several of his interlocutors that he had decided, despite it all, to cast a veto on the French proposal regarding the Middle East conflict (for a UN resolution on Palestinian statehood), if and when it comes to a discussion and vote in the UN Security Council. This is despite recent assessments that the Americans had decided not to cast such a veto.

This leak is viewed as a US attempt to sweeten the pot and show goodwill vis-a-vis the tough Israeli antagonist from Jerusalem. A sort of carrot-and-stick game in which the Americans try to entice the recalcitrant, weaseling Netanyahu by extending a hand, or half a hand, in peace. But there’s something else that’s been going on. High-echelon sources in the US administration have recently been expressing great amazement about Netanyahu’s pattern of behavior: The Israeli prime minister could now opt for pushing forward two large “special interest deals” with the administration. The first is called the “small deal,” and the second we will refer to as the “big deal.”

The “small deal” involves putting a stop to frenetic Israeli activity in Congress to torpedo, postpone, delay or change the emerging arrangement between Iran and the superpowers. According to the Americans, Israeli logic should dictate the following: Most likely, an arrangement will be reached; its outlines are already clear. And most likely, Obama will get Congress to approve the settlement. Therefore, the wise thing for Israel to do at this point in time is to ''cash in'' on halting the heavy pressure exerted by Jerusalem on US legislators (mainly Republicans) in exchange for military, diplomatic and general support, assistance, weapons, ammunition and the like from the United States. The Americans are ripe for this deal, but the hints they send to Jerusalem hit a brick wall. Netanyahu won’t budge; he continues to fight with all his might, backed by Sheldon Adelson’s money and the American Israel Public Affairs Committee lobby (the two don’t work together) in Washington.

The “big deal” involves the same upgrading of strategic relations and alliance that is supposed to be signed between Israel and the United States, should an agreement be signed with Iran. Clearly, an agreement with Iran worsens Israel’s strategic position in the region (an Israeli defense source said behind closed doors), and, clearly, the United States will be willing to try to provide Israel with strategic compensation to offset this deterioration. For that to happen, discussions should be taking place right now. But there are no discussions, no talks, no connections and no overtures. Jerusalem doesn’t answer. Netanyahu won’t move an inch.

“We have an irrevocable strategic opportunity to receive things from Washington that we have never before received,” an Israeli source, who until recently served in a senior position in the defense apparatus, said at the beginning of the week in a closed meeting. “Israel could upgrade itself regarding the quality of US assistance in the future; it could update and consolidate agreements and arrangements that were closed in the past, but without clear expiration dates. Every time that something happened in the international arena that harmed Israel’s defense position, and every time that Israel took chances regarding security, America knew how to compensate it. Only this time, despite US willingness, it’s not happening,” he said.

Not everyone in Israel’s diplomatic and security systems agrees with Netanyahu’s policy, which is deeply influenced by Adelson. This approach advocates gambling on one toss of the dice, and not conducting negotiations. Meanwhile, scathing words of criticism are being voiced in Israel’s diplomatic and defense systems regarding the current disruption of relations between the United States and Jerusalem. The critics, who measure their words and are careful to retain their anonymity, say that Netanyahu is mortgaging many of Israel’s weighty strategic interests in the throes of the war of destruction he has declared against Obama.

“That is not wise and not correct,” the critics say, “You have to think about the day after.” In contrast, Netanyahu’s people say, “There will be time on the day after for these kinds of things too. Meanwhile, now we have to focus on the goal and not loosen our grip.” In their view, the goal is that the United States should internalize the fact that the agreement about to be signed with Iran is a bad agreement.

Jerusalem received a large boost this week when Saudi Arabian King Salman bin Abdul-Aziz Al Saud refused an invitation to attend a landmark summit hosted by Obama at Camp David, in an effort to appease his Arab allies in the Middle East. “See, the Saudis also think like us and are giving Washington the cold shoulder,” a source close to Netanyahu said, with great satisfaction.

Only time will tell who was right in this debate. Meanwhile, Obama’s administration is adjusting itself to Netanyahu’s fourth government as someone would resign himself to a serious chronic disease. There is still no invitation for Netanyahu to come to Washington, and it will not be extended until after June 30. Meanwhile, in the mistrustful overtures between the two capitals, another option was raised: that the focus of the Israel-US relationship should switch from the broken Netanyahu-Obama alignment to the efficient, friendly and better functioning axis of Defense Minister Moshe Ya’alon and his US counterpart, Secretary of Defense Ashton Carter. At least this channel has continued to operate effectively in recent months.