Netanyahu needs Obama more than ever if talks fail

Israeli Ambassador to Washington Ron Dermer participated in the Republican Jewish Coalition spring meeting, exactly when his prime minister needs the full support of US President Barack Obama for advancing negotiations or backing Israel in the case that they fail. 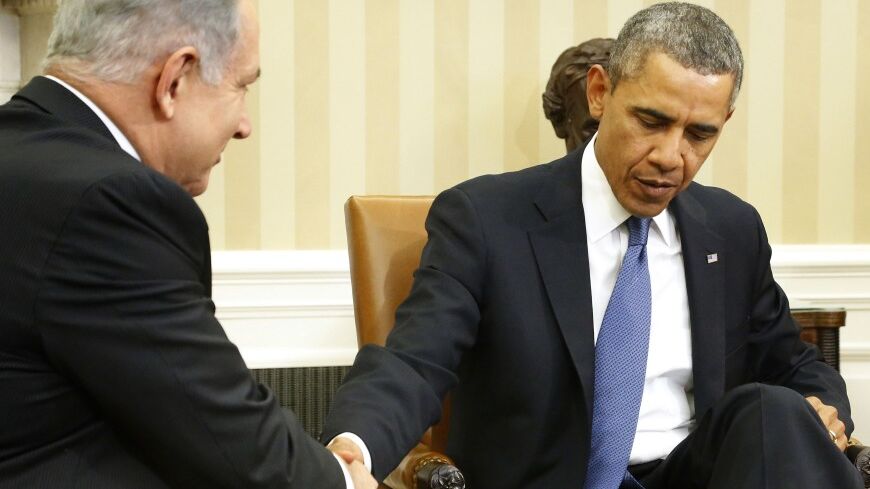 US President Barack Obama shakes hands with Israeli Prime Minister Benjamin Netanyahu as they sit down to meet in the Oval Office in Washington, March 3, 2014. - REUTERS/Jonathan Ernst

Amid efforts to save the negotiations between Israel and the Palestinians, the chairman of the HaBayit HaYehudi Party, Minister of Economy and Trade Naftali Bennett, informed Prime Minister Benjamin Netanyahu on April 10 that if Arab Israeli prisoners were released within the framework of the deal, his faction would immediately leave the governing coalition. That’s typical of the Middle East: Every time you think you've reached the height of the commotion or the bottom of the pit, it turns out there’s another summit ahead, or alternatively, there’s still more digging to be done. Netanyahu now knows that if the negotiations are spared, his coalition will not be. It remains uncertain whether the recently appointed chairman of the Labor Party, Isaac (Buji) Herzog, will agree to replace HaBayit HaYehudi in the government. It would therefore be interesting to find out what Netanyahu’s motivation might be to keep resuscitating the negotiations cadaver.

The big question is, what does Netanyahu really want? Are his statements to the effect that a two-state solution is imperative for Israel’s demographic future merely lip service or does he really believe this thesis? Is his commitment to the negotiations earnest or is it a cynical and political game of survival in which Netanyahu is leading the Americans, the Palestinians and chiefly his justice minister, Tzipi Livni, by the nose and all he wants is to buy time so that he can continue clinging to the premiership?

Having followed Netanyahu since his return to Israel in 1988, after serving as Israeli ambassador to the United Nations, and his subsequent immersion in local politics, most Israeli commentators are convinced that the latter scenario is the correct one. Netanyahu is not a radical ideologue. He is a professional survivalist. He will do anything to remain in office. He is not cut out for making big decisions. He doesn't care to leave his mark on history. He doesn’t have that kind of personality. The only mark on history he does want to leave behind is to break the record of longest-serving Israeli premier, a record that David Ben Gurion, Israel’s first prime minister, still holds. Netanyahu will soon break this record, but then what?

Israel is witnessing an intense internal struggle between the moderates and the extremists. It’s a struggle between a pragmatic public willing to pay a high price for quiet — Israelis want quiet; peace is something only a handful believe in — and those who want to make noise, thinking the bigger the commotion, the better the situation. Espousing the theory of chaos, the latter believe that the closer we get to Armageddon, the more we will be able to formulate the rules of the game and maybe reshape the entire region. In other words, what they want is to establish the third Jewish kingdom, set up a Palestinian state in Jordan and annex all the occupied territories.

By April 11, an outpost inhabited by such radicals remained in the settlement of Yitzhar. Earlier in the week, the police demolished a few illegal structures that settlers from Yitzhar had erected. In response, a few dozen students from the extremist rabbinical college Od Yosef Chai, located inside the settlement, proceeded toward a small military post established to defend the residents. Expelling the six reservists sleeping there, they then went on to completely vandalize the premises. Never in the history of clashes between the police and military and radical settlers has such an incident been recorded, whereby the radicals defy the Israel Defense Forces (IDF) — the sovereign in the territories — and simply trash a military bivouac.

In response, the IDF, on April 11 took over the Od Yosef Chai rabbinical college, whose activity has been discontinued. Defense Minister Moshe "Bogie" Ya’alon decided that he has had it up to his neck. Enough was enough. Drawing his political strength from the settlers, Ya’alon — with his hawkish views and mistrust of the Palestinian leadership — has become the settlers’ darling. That, however, does not make him an anarchist. Straight as an arrow, Ya’alon views the rule of law as his guiding principle. So if the Yitzhar settlers managed to upset him, it means a red line has been crossed. Thus, in Yitzhar, the IDF reclaimed its sovereignty in Judea and Samaria. Israel’s problem is that it isn’t only the radical settlers who threaten to rob the IDF of its sovereignty. The Palestinians, with the whole world behind them, also have their eyes set on that.

Netanyahu finds himself right in the middle of it all. Being in a precarious situation, he knows that he must pursue the negotiations with the Palestinians. The prospects of the Palestinians being inducted as a state by the UN, dragging Israel to various international tribunals while concurrently advancing the boycott of Israel in various forums, simply terrify the Israeli premier. At the same time, he is well-aware that if he goes the extra mile vis-a-vis the Palestinians, he will lose his coalition, the political right and his status as the “leader of the right-wing” to Bennett.

If the negotiations do ultimately run aground, Netanyahu will be greatly dependent on the Americans. Only the United States will then be able to help Israel and minimize the damage it will sustain in the international arena. To get an umbrella that provides real defense, Netanyahu needs a sympathetic US administration imbued with the motivation and the right mood to provide precisely that. It is questionable that Netanyahu will get what he wants.

Those looking for the source of the bad blood between the White House and the prime minister's office need look no further than to Israel’s ambassador to Washington, Ron Dermer. From the outset, his appointment spelled trouble. One could not have found a person more associated with the Republicans than him. In July 2012, ahead of US elections, he was the organizer and spirit behind the fund-raising dinner Netanyahu hosted in Jerusalem in honor of the Republican candidate, Mitt Romney. This was like giving President Barack Obama the finger. Later, Dermer traveled to the United States to help the casino mogul Sheldon Adelson goad as many Jews as possible into voting for Romney. That didn't pan out. Adelson’s gamble, into which Netanyahu, Dermer and Israel were dragged almost against their will, proved to be a bust. Subsequently, the already problematic relations were further shaken up. It was then that Netanyahu decided to dispatch Dermer to Washington as his ambassador.

Maybe the problem could have been fixed. Reason would have it that Dermer should have been laying low in Washington in a bid to make a new name for himself. We still have three more years with this administration, don’t we? In reality, however, the exact opposite is happening. Dermer was the guest of honor at the public audition Adelson held on March 27 in Las Vegas for GOP presidential hopefuls who want to oust the Democrats. Through Aharon Sagi, embassy spokesman in Washington, Dermer notes in his defense that previous ambassadors also attended the forum of the Jewish lobby of the Republican Party and that he intends to attend a similar function of the Jewish lobby of the Democratic Party. At best, this reaction feigns innocence. At worst, this is sheer charlatanism. In different times, when relations are going smoothly, when the ambassador wasn't Romney’s "chief of staff" and when the onus of proof was not so heavy, maybe he could have attended the function (but albeit not addressed the audience.)

Yet, not only did Dermer show up in Vegas, he also gave a talk. Incidentally, Ambassador Dermer tends to post photos of all his activities on his Facebook page. Nothing is left out. Every shred of a meeting or speech shares in the limelight. The event in Vegas, however, where the presidential hopefuls marched before Adelson, wasn't posted to Dermer’s Facebook page. Knowing that this would be a touchy issue, he probably realized that he would be creating a minefield for himself. Yet in the end, he nonetheless made the decision to show up.

Dermer’s appearance at Adelson’s function elicited scathing criticism in Israel. “He is jeopardizing not only his interests but also ours,” a senior Israeli politician well-versed in US-Israeli relationships told me. “Instead of trying to break his way through into the administration, he keeps upsetting everyone there. If I were President Obama, I would be upset, too.”

In its report on Dermer’s appearance at the Republican function in Las Vegas, Israel's public radio, Kol Israel, also reported that the US national security adviser, Susan Rice, has been avoiding Dermer since he took office. If the ambassador continues this type of conduct, he will have good fortune to thank if he even gets to meet junior Democrat members of Congress. The thing is, this isn’t only Dermer’s problem, it’s ours.