Netanyahu turns his back on Democrats, US Jews

Prime Minister Benjamin Netanyahu did not react to the statement by President Donald Trump about American Jews not loyal to their homeland, because for a long while now he has not counted them as a strategic asset of Israel. 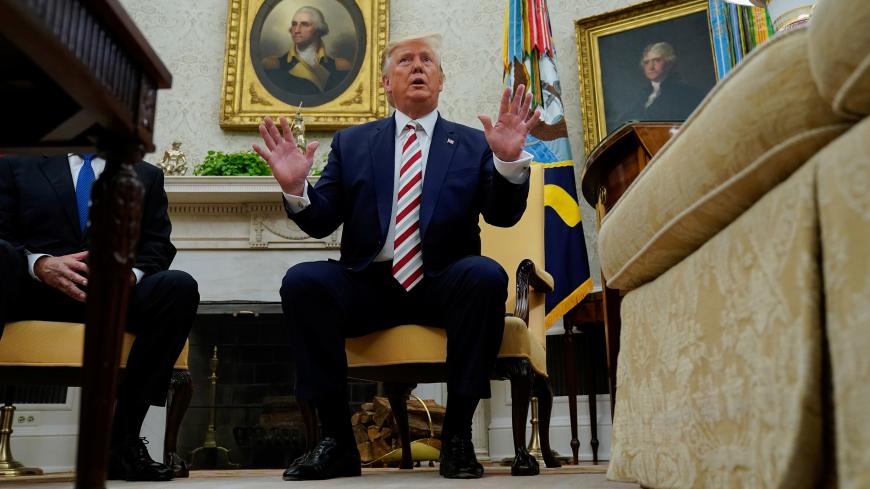 US President Donald Trump answers questions from reporters while sitting in front of portraits of former US Presidents George Washington and Thomas Jefferson, as he meets with Romanian President Klaus Iohannis in the Oval Office of the White House, Washington, Aug. 20, 2019. - REUTERS/Kevin Lamarque

No, it is not anti-Semitism. President Donald Trump’s statement about US Jews being disloyal is not about that. Trump’s behavior — and that of his senior partner, Prime Minister Benjamin Netanyahu — causes more damage to the Jewish state and Jews everywhere than it would if he were an anti-Semite. There is enough anti-Semitism in the world without Trump. The moves and statements (or silences) by the allies Trump and Netanyahu are rupturing the unity of the Jewish world and its identification with the Jewish state. They are tearing apart the delicate fabric that underpins US Jewish support for Israel, sabotaging decades of bipartisan US political backing for Israel, and polluting the value-based strategic alliance between Israel and the United States in the short and medium term. And that’s just for starters.

On April 3, 2015, Netanyahu issued a statement in English regarding the world powers’ nuclear deal with Iran. Someone at The Associated Press (AP) erroneously added the letter “R” after the prime minister’s name, as if he were an honorable Republican senator. This amusing mistake was no Freudian slip. It could have been real. If Netanyahu’s brother Jonathan (Yoni) had not been killed in Israel’s 1976 Entebbe hostage rescue operation, Netanyahu might well have remained in the United States. He had spent many years there and could have taken up the offer of a prestigious job at the Boston Consulting Group, carving out an American career for himself. He had already changed his name to a more American sounding “Ben Nitai” and had no plans to come home. Yoni’s death turned him into the family standard-bearer. He went to his brother’s funeral as Ben Nitai, and emerged as Benjamin Netanyahu who would become Israel’s prime minister less than 20 years later.

Netanyahu prides himself on being a supreme expert on the United States. Whenever any US-related issue came up at discussion he attended, Netanyahu would say, “Leave America to me.” That includes classified security Cabinet discussions, talks with the heads of the country’s intelligence agencies and attempts to assess what the United States might do given varying scenarios. Netanyahu’s only problem is that he understands Republican America. He has no understanding whatsoever of events in the other America, the Democratic one, America of the Latin and black communities, of the minorities, of the liberals.

His ambassador to the United States and right-hand man, Ron Dermer, is a product of the exact same lab, being the son of Florida Republicans. In recent years, these two have been leading a process of disastrous strategic proportions. They are methodically sabotaging the traditional bipartisan US support of Israel and boosting the perception of Israel’s automatic affiliation with the GOP. That is the least of it. Over the past two years, Israel has become identified totally with President Trump. Some 10 days ago, all it took was half a tweet by Trump to reverse Israel’s position on the planned visit by Representatives Rashida Tlaib and Ilhan Omar, and ban their entry into Israel. This week, Trump dubbed 75% of American Jewry as “ignorant or disloyal [to Israel]” — and Netanyahu was mum.

For decades, Israeli leaders and envoys of all stripes were careful not to embroil American Jewry in domestic US politics. Israel perceived the sweeping support it enjoyed from both Democrats and Republicans as one of its most important strategic assets. Some US presidents “targeted” Israeli prime ministers. The late President George Bush had it in for Yitzhak Shamir, Bill Clinton for Netanyahu, but Israel always steered well away from domestic political divisions. Netanyahu overturned this cautious approach, crushing all these historic checks and balances for the sake of his personal alliance with the Republicans, in general, and Trump, in particular.

At the same time, Netanyahu has scratched most of the American Jewish community off the list of Israel’s strategic assets in the United States. Instead, he chose Christian evangelists in the US and ultra-Orthodox Jews in Israel as his allies at the expense of millions of liberal US Jews who vote for the Democrats. For Netanyahu, American Jewry is an absentee community. In talks with Israeli diplomats and American Jews, Netanyahu has said there is no future for American Jews; they will disappear from the map soon due to their high rate of assimilation. He said that their interest in Israel is rapidly waning. Netanyahu went back on his promise to American Jews to allow pluralistic, joint prayer of men and women at the Western Wall. He refused to allow official state recognition of conversions to Judaism performed by American rabbis (those not accepted by Israel’s Chief Rabbinate), and turned his back on those who until recently were considered the brethren of Israel’s Jews, constituting 75% of the Jewish community considered one of Israel’s most strategic pillars.

Netanyahu has been warned repeatedly, whether by leading pro-Israel Democratic lawmakers, serving Israeli diplomats or long-time American Jewish supporters of Israel. One of these is American-Israeli tycoon Haim Saban, considered especially close to the Democratic Party. None of this has helped. Netanyahu has written off American Jewry, thrown it under the wheels of the bus and did not even bother looking back. This week, when Trump used the word “disloyal” to describe American Jews, kicking at their most vulnerable and sore point (see, for example, veterans of the painful Pollard affair), Netanyahu opted to turn his head and hold his tongue. His silence could only mean one thing: acquiescence.

Senior Israeli security officials have also warned Netanyahu. They have pointed out that Trump could lose the 2020 elections and Israel must not burn its bridges with the Democrats and US Jews. Even the heads of the American Israel Public Affairs Committee, generally a disciplined lobby attentive to Netanyahu’s whims, are fuming silently. No one has been able to convince Netanyahu that the path he has taken leads to an abyss. He is determined to maintain his alliance with Trump at all cost. He is still trying to drag the president on another quick visit to Israel before the Sept. 17 elections. He and Trump hang on to each other and will do all they can to avoid being hung out to dry.

On Aug. 22, former US Ambassador to Israel Dan Shapiro tweeted that Trump has an open slot on his schedule at the beginning of September now that he has canceled a planned trip to Denmark over the “Greenland purchase” saga. No one will be very surprised if he shows up in Israel, as a worthy substitute. “If he comes, I hope he will put in an offer to buy us, too,” a former senior Israeli diplomat told Al-Monitor on condition of anonymity. “Given the current state of affairs, I think he has already bought Israel and even at a significant celebrity discount.”