Why Bibi is personally responsible for Iran policy failure

Prime Minister Benjamin Netanyahu will be held solely responsible for Israel's diplomatic failure on Iran, maintaining too much control over too many portfolios and surrounding himself with people who won't criticize him. 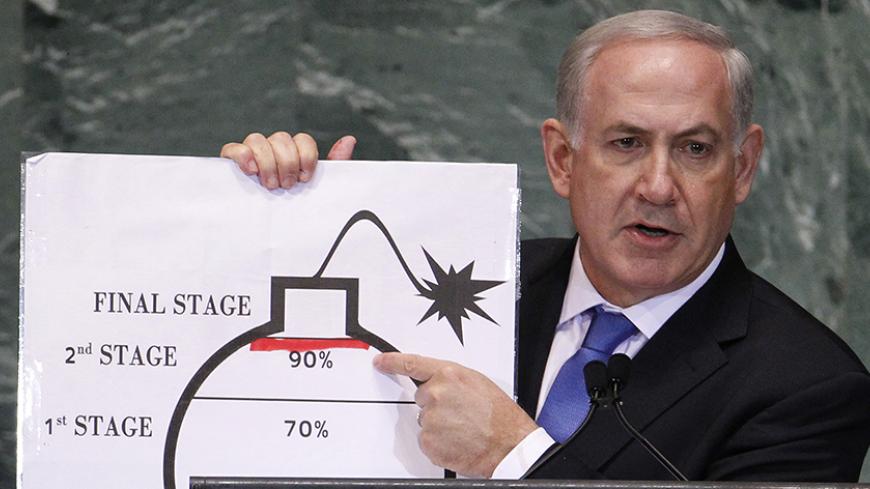 Israel's Prime Minister Benjamin Netanyahu points to a red line he drew on the graphic of a bomb used to represent Iran's nuclear program as he addresses the 67th United Nations General Assembly at the UN headquarters in New York, Sept. 27, 2012. - REUTERS/Lucas Jackson

The whole world speaks of a historical agreement with Iran, but Prime Minister Benjamin Netanyahu speaks today, July 14, of a "historical mistake for the world." Netanyahu used this same terminology many times in the past.

On July 12, the prime minister of a state the size of New Jersey, tiny Israel, announced, “We will not accept” the surrender to Iran by the United States, Russia, China, Britain, France and Germany, and also the leadership of the European Union's 28 members. At the start of the weekly Cabinet meeting, Netanyahu accused the world powers of capitulating to Iran and ignoring its incessant calls for the destruction of the state of Israel.

Indeed, an Israeli leader has no right to accept a plan to destroy the Jewish state. When the prime minister announces that the agreement with Iran hastens Israel’s demise, he cannot make do with a statement to the media. He must leave no stone unturned in order to remove this threat. The Lausanne understandings and the emerging agreement being formulated in Vienna indicate that the verbal slings and arrows Netanyahu fired at the White House from the congressional podium on March 3 did not affect the negotiating powers. Now he is preparing to lash out in every direction, David against a company of Goliaths. There’s no telling whether this time David will gain the upper hand.

Assuming that “we will not accept” does not include a military attack on Iran or the elimination of nuclear scientists on its territory — after it signed an agreement with the six major powers — the only way to carry out such a mission is to line up a large majority in the US Congress to override a presidential veto. There’s no secret which of the two American parties the prime minister favors. In the last US presidential elections he made no attempt to hide his support for President Barack Obama’s rivals. And so far, there is no sign of him changing his position. Despite the attempts by former Secretary of State Hillary Clinton to toe the right-leaning line of the US Jewish community, it’s safe to assume that Netanyahu will bestow his favors on the Republican candidate. After all, it was the Republicans who arranged for him to speak in front of the two houses. Surely he would prefer to see another name — Bush, for instance — gracing the White House door over Clinton.

At that same Cabinet meeting at which he promised that Israel would not stand for a capitulation to Iran, Netanyahu sent the Democrats a taste of the cocktail he’s mixing for their candidate at the next elections if they don't assist the Republicans with the necessary votes to topple the agreement with Iran. He played for his ministers, the media was quick to learn, a 1994 video clip in which former President Bill Clinton is heard patting himself on the back for the framework agreement he reached at the time with North Korea on its nuclear program. The Democratic president promised to great fanfare that the agreement would “make the world a safer place.” In 2013, the US Defense Intelligence Agency issued a classified report according to which North Korea can, in all likelihood, arm a ballistic missile with a nuclear warhead.

Netanyahu is right; Clinton's expectations of North Korea were exaggerated. There’s no doubt North Korea continues to flout the will of the world and to hold nuclear weapons. What Netanyahu forgot or did not want to say is that there was another president who took seriously the word of a dictatorial regime regarding nuclear weapons. He was not a Democratic president who recoiled from using force. In February 2007, President George W. Bush took great pleasure in the success of negotiations with North Korea that culminated in its commitment to seal its nuclear reactor in Yongbyon within 60 days and to submit to international inspections at the site. Bush said at the time that the talks provide "the best opportunity to use diplomacy to address North Korea's nuclear programs." White House spokesman Tony Snow calmed skeptics, saying that if Korea fails to abide by the agreement, “There is still a possibility of sanctions through the international community.” Sound familiar?

If Netanyahu had by his side a seasoned foreign minister to provide some balance, he might have warned him against his continued crude interference in American politics. Had he not surrounded himself with yes-men, someone might perhaps have told Netanyahu that his threat to “not accept” the actions of the world powers makes the same impression on them as the threat of a tail to stop wagging a dog. But there’s no one of stature by Netanyahu’s side to challenge his foreign policy and his conduct toward the international community.

During his previous term as prime minister, Netanyahu named settler Avigdor Liberman, the most abrasive politician in the Knesset, as Israel’s top diplomat. During his current term, Netanyahu kept the foreign service for himself and named Tzipi Hotovely as his deputy minister, so that she could tell Israel’s diplomats that God gave the Jewish people the whole of the Land of Israel. Between dealing with the Iranian nuclear issue and managing his bare-bones coalition, the prime minister has to run his other ministries — the Health Ministry, the Ministry of Communication and the Ministry for Regional Cooperation. Netanyahu keeps all of these portfolios for himself mainly to maintain the possibility of enlarging the coalition in the future. The extra portfolios could then be delegated to new coalition partners.

Associate Chief Justice Elyakim Rubinstein, who was in the past appointed Cabinet secretary by Likud Prime Minister Yitzhak Shamir and served from 1986 to 1994, said last week that holding many ministerial portfolios could interfere with Netanyahu’s performance. At a Supreme Court hearing on July 7 on a petition submitted by Yesh Atid against Netanyahu for holding the health portfolio, Rubinstein asked the state’s representative, “Who is truly in charge of health? You said the prime minister has Iran, and defense, and foreign affairs, and communications and a few others. So someone has to be in charge. Who’s in charge?”

Attorney Yisrael Maimon, who served as Cabinet secretary between 2003 and 2007 during the second Sharon government and the Olmert government, told Al-Monitor on July 12, “The job of prime minister, especially in a country as challenging as Israel, requires that the captain deals with issues which he regards as being at the top of the national agenda, and that’s how his schedule is run.” Maimon said that having to head many ministries places an extreme burden on the prime minister and his staff. “Even without having to deal with the issues of other ministries, the prime minister faces many and complex tasks,” he noted.

The defeat in the campaign to foil the Iranian plot to destroy Israel, as Netanyahu claims, will bear his name. The man who chose to personally lead one of the most difficult and intricate diplomatic missions that Israel has undertaken since its inception — if not the most difficult and intricate of them all — will bear sole responsibility for its failure. But we will all pay the price for the deep erosion in the estimation of Israel’s international influence and of the wisdom of its leaders.