Government ministers have launched an assault on the Supreme Court after its rejection of the natural gas outline. 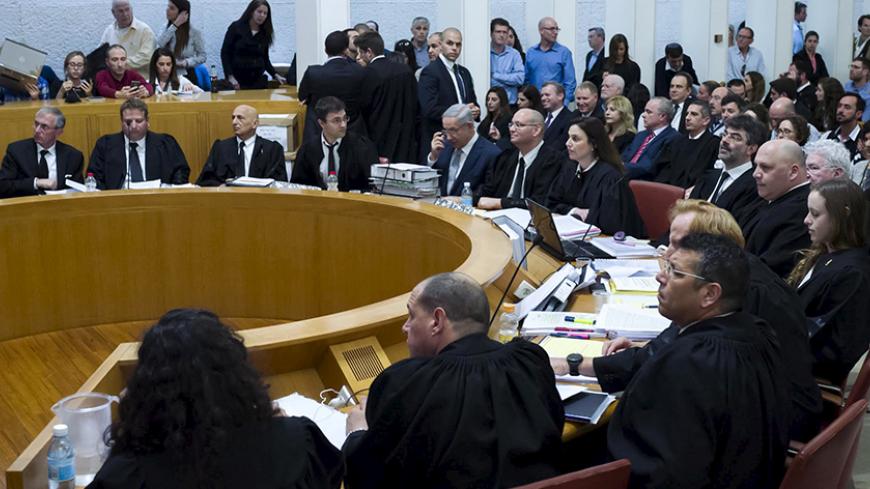 Israeli Prime Minister Benjamin Netanyahu sits in the Supreme Court before he speaks at a hearing regarding the legality of a government-approved deal to develop Israel's offshore natural gas reserves in Jerusalem, Feb. 14, 2016. - REUTERS/Jim Hollander

Some 15 years ago, Aryeh Deri entered the gates of the Maasiyahu Prison, southeast of Tel Aviv, to begin serving time after being convicted of bribery, fraud and breach of trust while serving as minister of interior and chairman of the ultra-Orthodox Sephardic Shas Party. On March 29, Deri’s name was, once again, linked to suspicions of alleged criminal wrongdoing while serving, once again, as minister of interior and Shas chairman. The first Deri affair, which resulted in his incarceration in September 2000, marked a low point in the Israeli judicial system's public standing. This week, the court was again made a scapegoat by irresponsible, unbridled politicians.

Back in 2000, hundreds of followers accompanied Deri to the gates of Maasiyahu, chanting, “He is innocent,” after unanimous court decisions involving six judges (three at the district court level and three on the Supreme Court). Public figures, rabbis and a prominent journalist, the late Amnon Dankner, made pilgrimages to a protest tent proclaimed “The Roar of the Lion” — Aryeh means “lion” in Hebrew — erected outside the prison gates.

The May 1999 elections, for the 15th Knesset, had been held in the shadow of the tough sentence handed down to the Shas leader. Deri's Sephardic supporters turned the occasion into a no-confidence vote on the judicial system, boosting support for Shas, which won 17 seats, up from its previous 10.

This time around — should the initial investigation into corruption allegations against Deri turn into a full-fledged case and Deri once again recruit his legions for an assault on law enforcement and the judiciary — he will find loyal partners in the top echelons of government. Already, in the days preceding a report on Channel 2 about the suspicions surrounding Deri, the prime minister and members of his Cabinet launched an attack on the Supreme Court. The alleged justification for the attack was the court’s March 27 decision ordering the government to scrap the current version of the plan for exploiting the country’s natural gas reserves.

In a 4-1 vote, the justices ruled that the provision committing the government to abstain from making regulatory changes to the plan for a decade was illegal. The court further ruled that, unless the state amends the plan within a year, the blueprint will be null and void.

The head of the judicial panel, Supreme Court Vice President Elyakim Rubinstein — who under Likud Prime Minister Yitzhak Shamir served as Cabinet secretary, a stepping stone to his 1997 appointment by Prime Minister Benjamin Netanyahu as attorney general — wrote that the 10-year commitment, under the so-called stability clause, had been undertaken without the authority to do so and contradicted basic regulations of administrative law. He stated, “The government is not authorized to decide not to decide and not to act.” Justice Salim Jubran added that the sweeping language of the stability clause could damage Israel’s international standing should the government be forced to renege on its commitment.

Just hours after the decision was announced, Netanyahu gave the signal to storm the citadel. A statement issued by his office said, “Israel is seen as a state with excessive judicial interference in which it is difficult to do business.” It also claimed that the “curious” ruling would severely damage Israel's economy. Yuval Steinitz, minister of infrastructure, energy and water, went further, calling the Supreme Court’s decision “miserable.” The ruling by the top court, whose judges deliberated for months, would, in his view, fail the test of democracy in other Western countries.

Justice Minister Ayelet Shaked opined that the Supreme Court prevents Israel from acting as a well-regulated country. Immigrant Absorption Minister Ze’ev Elkin, a member of the diplomacy and defense Cabinet, accused the justices of being ensconced in their “ivory tower” and stealing billions from the pockets of the country’s citizens, money that “could have been directed to the welfare, health, and social needs of others.” Elkin called for a “fundamental reform of the legal system in order to restore rational Israeli democracy.” In other words, the Supreme Court is currently turning our national home into a lunatic asylum.

Tourism Minister Yariv Levin, who also serves as the liaison between the government and the Knesset, took the rhetoric to another level. In a speech to the Knesset plenum, Levin accused the justices of having a political party bias. Nothing short. In a response to Knesset member Ayelet Nahmias-Verbin of the Zionist Camp, who dared defend the Supreme Court's decision, Levin said, “Of course you respect [the ruling], because the people sitting there think like you; they come from the same background as you. … They take your positions, which most of the public doesn’t support, and that’s why you are sitting on this side of the hall [on the opposition benches], and they make a switch, a jump. They turn things upside down, using the views of the opposition to replace those of the government.”

That same day, from the same podium, Defense Minister Moshe Ya'alon attacked his fellow Cabinet ministers and Knesset members for their support of the Israeli soldier who on March 24 shot dead a wounded Palestinian in Hebron. The next day, Avigdor Liberman, chairman of Yisrael Beitenu, troubled himself to go to the military court to express solidarity with the suspect. “Even if he is wrong, it’s not possible for everyone to abandon him and accuse him of murder,” Liberman wrote on his Facebook page. This is not the first time that the former foreign minister, who himself barely escaped a series of police investigations unscathed, has found fault with the Israeli justice system. Liberman knows, of course, that the soldier is being provided a full legal defense and that the case is ongoing.

“Do you want a brutalized army that’s without a moral backbone?” Ya’alon lashed out at the politicians leading the vocal campaign against the handling of the soldier’s case. It’s too bad that the senior politician failed to take the opportunity to direct another question to the head of the government in which he serves and to his government colleagues: Do you want a legal system devoid of a moral backbone and a brutalized democracy? Maybe there’s no need to ask. The answer is evident in the politicians’ reactions to the court ruling on the natural gas plan.