Egypt’s Sudanese refugee community looks to the Mediterranean as a way out of the intimidation and corruption they face in Egypt. 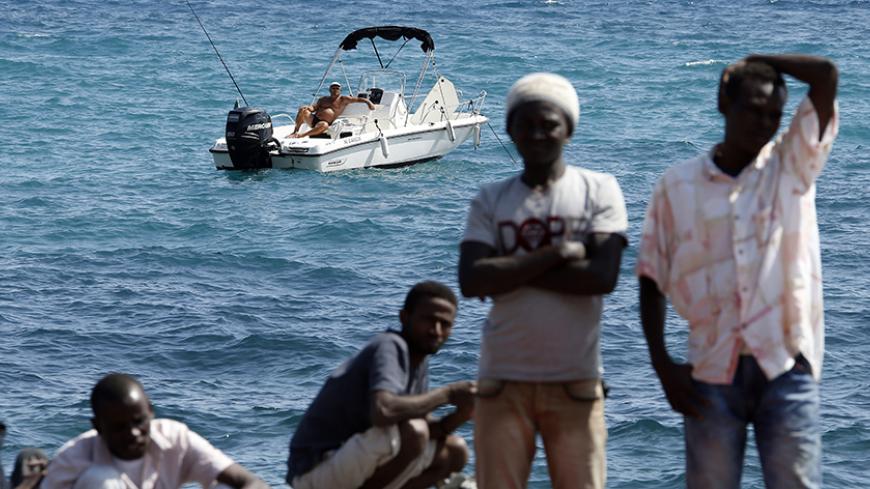 A man fishes from his boat as a group of migrants gathers on the seawall at the Saint Ludovic border crossing on the Mediterranean Sea between Ventimiglia, Italy, and Menton, France, June 14, 2015. - REUTERS/Eric Gaillard

CAIRO — Sudanese refugees are now thought to be the group leaving in the largest numbers from Egypt’s north coast this year.

According to the latest Office of the United Nations High Commissioner for Refugees (UNHCR) data based on detention figures, since the beginning of the year, more than 650 Sudanese refugees and asylum seekers were detained for trying to leave irregularly, compared with around 330 Syrians.

Although the North Africa Mixed Migration Hub, a Cairo-based group of agencies that report on irregular migration and immigration detention around the Mediterranean, noted in its latest monthly trend bulletin that "increased number of arrests of Syrian refugees … have been observed in May and confirmed in June 2015, as compared to previous months,” by the end of June, Sudanese refugees still “constituted the great majority” of those attempting to leave Egypt.

Egypt’s Sudanese community gets relatively little attention when compared with Syrians. So why are migration flows from Egypt apparently so dominated by Sudanese this year?

Mohamed and Alfadil, both Darfur refugees who asked that their full names be withheld for security reasons, were sitting on the pavement outside the International Organization for Migration (IOM) headquarters in Cairo. In June, they told Al-Monitor that they had been sleeping outside the building for about a week in protest, saying resettlement had been promised them well over a year ago.

Both men had fled Darfur in the late 2000s and headed for Libya. Mohamed was looking for work in a safer place; Alfadil was an activist fleeing possible arrest. After 2011, they crossed into Egypt and entered Salloum camp, the country’s only modern experiment with refugee encampment. They were told by UNHCR that they could complete refugee status determination in Cairo. They have been there since.

Alfadil, who studied English and geography at a university in Sudan, feels betrayed. “When we came from Salloum, [a UNHCR representative] said, ‘We’re going to complete your procedures in one year … during this time we will support you.’ But they haven’t completed our procedures, and now they’ve stopped the assistance.” Once registered refugees have their resettlement procedures accepted, their file is transferred to the implementing partner, in this case the International Organization for Migration (IOM).

Eighteen months later, both men are still waiting. Like the other Sudanese and Eritrean refugees who protest outside the IOM offices each week, they do not know what — if anything — will happen, or when.

Funding shortfalls, bureaucracy and dealing with faceless organizations are experienced by seemingly every refugee population in Egypt. But some of the challenges facing people such as Mohamed and Alfadil are particular to the Sudanese community, too.

Pauline Brucker, doctoral student and researcher on Sudanese refugees from CERI Sciences Po, said that the backdrop for Sudanese refugees thinking about migrating is “structural living conditions … which were always quite precarious.” But in reality, there are several push factors, she said.

“The road has been opened by Syrians since 2013, and especially 2014, which means that the structural needs for organizing such trips are already there,” she told Al-Monitor. “The road to Israel, that absorbed about 15,000 to 20,000 Sudanese from 2006 to 2013, has been closed … and the opportunities for Sudanese in Egypt have shrunk.”

The long, drawn-out resettlement process is another factor. “A lot of people are tired of waiting [and] the newcomers also know about the waiting periods and want to gain from their elders’ mistakes.”

At the same time, security is a topic that frequently crops up in conversations with Sudanese refugees.

On Sept. 22, Eric Reeves, a US journalist, academic and author of "Compromising With Evil: An Archival History of Greater Sudan 2007-2012," received leaked minutes from a high-level security and military meeting in Khartoum that took place Aug. 31. In this meeting, a series of Sudanese officials discussed cooperation with Egyptian President Abdel Fattah al-Sisi’s regime, as well as relations with Iran and Saudi Arabia.

Reeves writes that National Congress Party political secretary Mustafa Osman Ismail, while discussing a recent meeting with Egyptian officials in Cairo, said, "The Egyptians have concerns about the Brotherhood in Sudan. I asked them to stop the activity of the Militias and opposition and in return I will promise to work with them to control the activities of the Brotherhood." Ismail outlined a kind of mutual trade-off of repression toward one another’s opposition: Khartoum goes after the Brotherhood in Sudan if Cairo goes after the Sudanese opposition in Egypt.

Further on in the piece, Reeves writes that Defense Minister Gen. Yehia Mohammed Kheir explained that the Egyptian government and security apparatus have “all the information regarding our opposition in Egypt, their activities, meetings and relationships with the embassies in Egypt.”

Reeves told Al-Monitor, at the time of the original leak, that it is reasonable to assume this kind of cooperation manifests itself in the lives of Egypt’s Sudanese refugee community.

Refugees often talk about threats and intimidation from unknown sources who they believe are from either Egyptian intelligence or Sudanese, via the embassy in Cairo. One Darfuri community activist told Al-Monitor how he was beaten in a Cairo street and told to stop organizing meetings where other refugees discussed the political situation in Sudan. Refugees often point to the improved relations between Cairo and Khartoum as evidence for this kind of intimidation.

Brucker believes that this is probably restricted to refugees engaged in “collective activities” (such as community organizing and political discussion groups) or those who were involved politically back in Sudan.

“Sudanese have been used to direct and quite strong cooperation between their embassy and the Egyptian secret service,” Brucker told Al-Monitor. “But if you stay away from [political or community activities], you will find no [security] problems at all and may be able to renew your passports at the embassy in Cairo, even though you have applied for refugee status and/or resettlement.” She added, “The quest for asylum is not the problem. The problem is whether or not you engage in collective activities that the regime will not allow.”

The Sudanese Embassy in Cairo was unavailable for comment.

Yousef, a refugee originally from Darfur but now living in Europe, says that threats actually pushed him toward the smuggling boats of the Mediterranean last year.

“Originally, traveling to Europe was never on my mind, because I know what happens as I saw it on TV. This way is too difficult,” he told Al-Monitor. “But, you know, I had so many problems in Egypt with the embassy and the community … and [UNHCR] knew about all of it because I told them, but they had nothing for me.”

Yousef started receiving phone calls from unknown Egyptian men, cursing and threatening him. After one call late at night, where the voice on the other end of the phone made threats against his life, Yousef decided to leave Cairo. “I knew that if Egyptians are calling you with these harsh words, you have to take care. I’d been in Egypt a long time,” he said.

Leaving behind his wife and children, Yousef traveled to Alexandria to lay low for a while, but ended up talking to an Egyptian smuggler who agreed to help him, despite Yousef not having the usual $1,500-$2,500 for a place on a boat.

It was a journey never intended, but one that more and more Sudanese refugees and asylum seekers are making from Egypt this year. Others, like Mohamed and Alfadil, are not so lucky.

“Many people here go by the sea,” Alfadil told Al-Monitor. “But if you want to do that, you have to have money. And we don’t have any.”

Mohamed agreed. “If we had enough money today, we’d go by the sea right away,” he said. “Organizations here have no humanity.”

Irregular migration from Egypt's Mediterranean coast, often presented as a mostly Syrian issue, is becoming increasingly intertwined with the complex story of the country’s Sudanese community. Many years of fraught living conditions, frustrated hopes and fear are now pushing more and more Sudanese refugees toward the sea.