The debate over the European Union’s plan to set up centers for migrants in North Africa and the Middle East has been rekindled in Egypt, where officials reiterated their rejection of such centers. 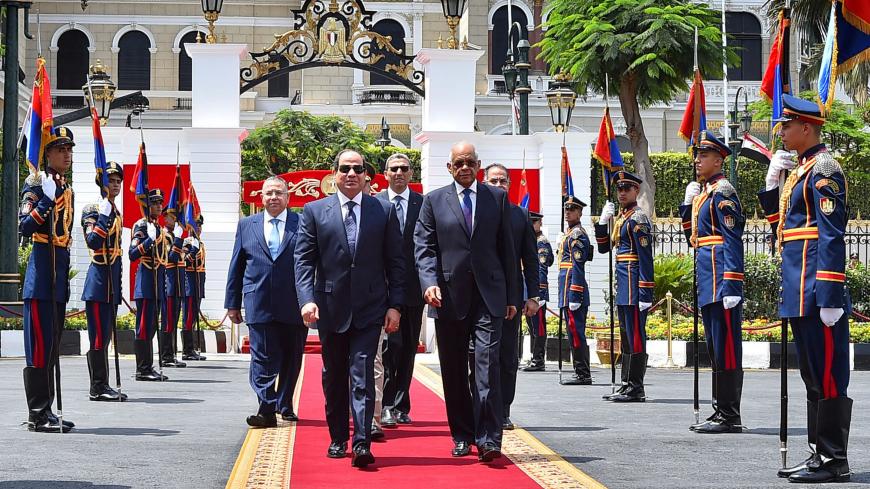 Egypt recently renewed its refusal to set up so-called migrant reception centers on its lands over legal considerations. This rejection rekindled debate over the European Union’s plan to establish refugee camps in Africa and the Middle East in a bid to screen and stem the flow of migrants attempting to leave for Europe. Egypt's refusal has compounded the EU’s refugee problem, piling more pressure on its leaders, who are racing against time to make a tangible breakthrough in refugee-related talks.

The EU seeks to establish these centers in Egypt to hamper the flow of migrants to Europe via the Mediterranean. On July 1, Egyptian parliament Speaker Ali Abdel Aal told the German newspaper Welt am Sonntag during a visit to Berlin that building refugee camps affiliated to the EU in Egypt would "violate the laws and constitution of our country.”

Legal migrants, he noted, can live freely wherever they want in Egypt and can't be forced to live in certain centers.

The proposal comes within the framework of the EU’s controversial plan to build regional "reception centers" in North Africa in hopes of putting the brakes on the influx of migrants and asylum seekers and foiling the attempts of human traffickers to send migrants to Europe across the sea. The deal, announced June 29 by EU leaders after their emergency meeting in Brussels, also includes building “controlled camps” in European countries.

So far, no northern African country has shown interest in the deal. Egypt, along with Algeria, Morocco, Tunisia and Albania, have officially rejected the EU move, putting EU leaders in dire straits.

“Egypt has full sovereignty over its lands and it should not be part of the EU plan. More importantly, such camps are at odds with the provisions of the Egyptian Constitution, which prohibit allocating certain centers for refugees or isolating them by any means. This stance is also in compliance with the international law and agreements dealing with this issue,” Suzy Nashed, a member of parliament's Committee on Legislative and Constitutional Affairs, told Al-Monitor.

Nashed, meanwhile, said refugees are welcome in the country, adding it is better to engage them in Egyptian society rather than accumulating and isolating them in centers.

Abdel Aal's statements came as part of Egypt's crystal-clear stance against the notion of refugee camps. In March 2017, Egyptian Foreign Minister Sameh Shoukry highlighted Egypt's refusal to establish refugee camps during his meeting with Dimitris Avramopoulos, the EU commissioner for home and migration affairs . Migrants and refugees, Shoukry remarked, live freely in the country and have access to the range of services offered to Egyptian citizens, including education, health and transportation services. According to Shoukry, Egypt has managed to halt the departure of illegal migration boats from the country since September 2016.

In December 2017, Shoukry reiterated Egypt's rejection of the EU plan in another meeting with Avramopoulos. Shoukry stressed the need to handle the root causes of irregular and illegal migration, including myriad social and economic factors that forced refugees to flee their lands and seek haven in other countries. During this meeting, Shoukry also revealed Egypt was moving ahead with its approach toward dealing with refugees despite “lack of international support.”

Tayseer el-Naggar, the head of the Cairo-based Syrian Refugees Union, hailed Egypt's stance, stressing the idea of putting refugees in camps is “uncivilized.”

“It is not humanitarian to besiege refugees in centers. Egypt's rejection of the EU plan doesn't mean it's against migrants and refugees. Rather, it wants them to lead a decent life through viable, adequate mechanisms. Egypt, for years, has been hosting refugees — not only Arab refugees, but also African ones, and it treats them in a civilized way,” said Naggar, a Syrian refugee himself living in Egypt.

Instead of adding to the burden of countries like Egypt with struggling economies, the EU, the UN and the international community should offer more financial support to these countries, Naggar told Al-Monitor.

“The Arab countries' stance against refugee camps reflects their civilized ideology in refugee-related issues and their willingness to integrate them in society — although the number of migrants is still on the rise,” Naggar said.

According to a recent report issued by the United Nations High Commissioner for Refugees (UNHCR), the number of registered refugees and asylum-seekers in Egypt hit 221,675 in January, and 3,118 more were newly registered this year. Syrians constitute 57% of the total refugees, followed by Sudanese and Ethiopian refugees, according to the UNHCR.

“There is still a problem in registering refugees in Egypt. There are many migrants who have not been registered yet. On the security level, there is no fear of refugees who have been residing in Egypt for years. But in light of the significant rise in terror incidents worldwide, more procedures should be taken to create a database for migrants,” Naggar said.

On July 4, Shoukry announced that Egypt is hosting about 5 million refugees of different nationalities, registered and unregistered. He spoke during a joint press conference with his German counterpart, Heiko Maas.

The EU is still stepping up efforts to boost cooperation with Egypt on refugee issues. In August 2017, Egypt signed a memorandum of understanding with Germany with the aim of combining efforts to combat irregular migration in a way that will benefit both countries.

On June 22, Portugal also offered to host nearly 400 refugees residing in Egypt in 2018 and 2019 in cooperation with the UNHCR and Egyptian authorities. This move came within the framework of the Egypt-EU resettlement program.

Political analyst Ammar Aly Hassan said Egypt rejects the notion of refugee camps purely for security reasons. “Let's take Syria, home of the majority of refugees residing in Egypt, as an example. Due to the unrest engulfing the country, Syrian security forces may not thoroughly inspect the refugees coming to Egypt. This increases the possibility of paving the way for terrorist infiltrators to go to Sinai,” Hassan told Al-Monitor.