Is Europe closing door to refugees?

With smuggling tragedies increasing in the Mediterranean, Europe is looking for ways to stem the tide of human smuggling from North Africa. 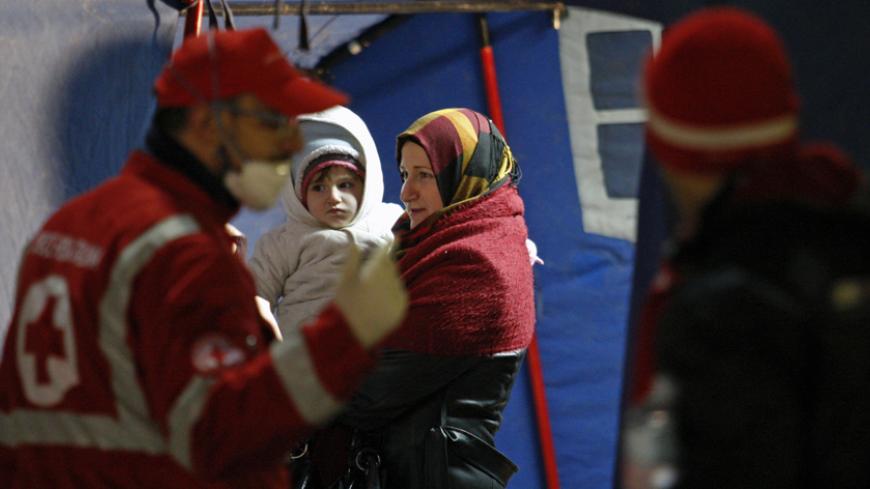 CAIRO — Abu Ammar likes to crack jokes. It helps in his line of work. “If I have the opportunity, why not?” he said, smiling coyly. “I am a broker, and you are my first customer.”

Abu Ammar, not his real name, is a Syrian “simsar” (broker) for Egypt's smuggling networks, connecting potential passengers with smugglers bound for Italy.

“When I felt I needed to travel, I started [working] … I’ve moved something like 10 or 15 people, mostly my relatives,” he said, also admitting that he is acquainted with Abu Hamada, who according to a report in The Guardian newspaper, is the “lynchpin” of the Syrian network in Egypt. “But now I’m working with filling out papers, documents, printing and so on,” Abu Ammar stated. With many people waiting for spring, the peak season for Mediterranean crossings, Abu Ammar has found other ways to earn money. For many times the cost of transit to Italy, he says he can get you a visa for Europe.

A looming European Union crackdown on smuggling has some worried that the door to Europe will close on increasingly vulnerable, desperate refugees and asylum-seekers in third countries such as Egypt. In 2014, more than 218,000 people crossed the Mediterranean irregularly while more than 3,500 died trying, according to estimates by the United Nations High Commissioner for Refugees. There are already signs that this trend will continue. More than 300 people died Feb. 9-11 at sea when the four dinghies they were traveling in encountered stormy weather off Libya, refocusing scrutiny of Europe’s border policies.

A plan to "address the roots of the current flows of irregular migrants and of smuggling” is currently being drafted by the European Union, according to Dimitris Avramopoulos, commissioner for home affairs and migration, who promised “reinforced cooperation with third countries” during a European Parliament debate in January. Much of the rhetoric, however, has focused on the criminality and immorality of smugglers, and exactly what “reinforced cooperation” means remains in doubt.

According to a 2014 report by the political scientist Corrine Balleix, “The EU’s declared goal is to dissuade illegal migrants from setting off on perilous journeys.” This would be implemented, in the short and mid term, through largely security-based approaches, including “support [of] third countries’ border control infrastructures, … information campaigns about the dangers linked to illegal immigration” and expanded border control operations.

A European Commission spokesperson had no further comment on Avramopoulos’ speech, which suggested that cooperation would include “broader foreign policy considerations, development assistance and humanitarian actions.” A Commission for Home Affairs and Migration statement asserted that initiatives had been taken in this direction, but that the “time has come to speed up their implementation in order to have a concrete impact.”

Egyptian Foreign Ministry spokesman Badr Abdel Aty told Al-Monitor that Europe must do more, through “technical assistance … socio-economic projects and development,” to “make illegal migration unattractive.” Such migration management projects already exist, although the Egyptian government would like to see more action being taken, including by providing legal migration channels through resettlement. “If you close the doors in Europe, you push others to find illegal ways to migrate,” Abdel Aty said.

Clearly, Europe wants to address the issue of migration at its roots, where stories of intolerable pasts and imagined futures are not hard to find. Today in Cairo — in the Syrian cafes of October 6 City, the Sudanese tenements of Masakin Othman, Eritrean homes in Mohandiseen and tucked away in apartment blocks and multiple diasporas across the city, many thousands are preparing for the “journey of death.” People are ready to die for the chance of a future. Europe may be slowly facing up to this reality, but according to critics, recent steps suggest the EU is pursuing a longstanding policy of outsourcing border control, “externalization,” in an attempt to curb migration.

“It’s not really a sustainable solution to just put all the emphasis on smuggling and border management,” said Aspasia Papadopoulou, senior advocacy officer at the European Council on Refugees and Exiles. Speaking with Al-Monitor from Brussels, she said, “By addressing smuggling only, you’re just perpetuating the same problem. Smuggling routes just change all the time, so if cooperation with North Africa is intensified, then people will come through Turkey and so on.” Papadopoulou said that this approach is not new, and that viable alternatives are not being explored as much.

The latest EU initiative is the Khartoum Process, set out in a declaration Nov. 28, 2014, which points to outsourcing border management to origin and transit countries of mixed migration flows around the Horn of Africa. There are other provisions, but again, the actual plans remain unclear.

“If you go back 10 years, … it was the same discussion — how to keep people from reaching Europe,” Papadopoulou said. “You see this every time there is an incident in the Mediterranean. The bottom line of all discussions is ‘We need to work together. We need to cooperate with third countries.’ But it just never really comes down to opening legal channels.”

Andrea Stochierro, policy officer at the Catholic nongovernmental organization network FOCSIV, said in regard to Khartoum, “This process is just beginning, so we have to wait to see what kind of project will be implemented.” While he warned that security solutions could “increase the cost for migrants,” Stochierro doubts it is about externalization. “I know the officials in Italy, … and they don’t think about externalization of [border] control,” he said. “I feel that they are genuine in their idea to move against the criminal organizations running human trafficking.”

While Europe tries to reform its way out of a situation less sustainable with each new tragedy at sea, there remain the smugglers, who are more than happy to offer a chance of a new life. “We have four or five ‘friends’ who are always monitoring new routes,” Abu Ammar explained. Europe's lack of resettlement options helps them by providing a steady demand, he pointed out. “[Europe is] making the work of Abu Hamada easier!”

“There are two ways to kill the Syrian refugees: either by building a wall they cannot cross or letting them die in the ocean,” said Abu Ammar. With a smile, he continued, “Even if the Europeans build a huge wall around the Mediterranean, the Syrians would make a submarine to get under it.” It is another joke, but this time Abu Ammar means it. He has found a way under the wall.