A boat disaster near Istanbul shows the emergence of a new smuggling route to take migrants via Turkey into the European Union. 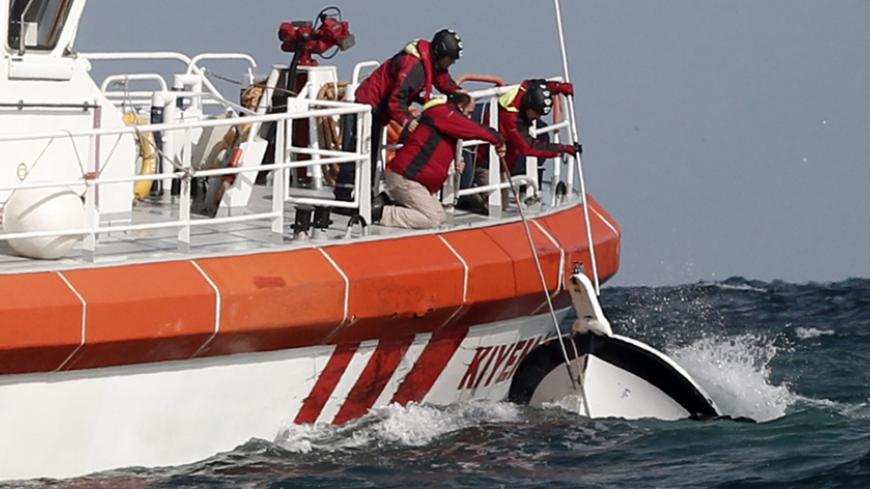 Rescuers retrieve a boat that sank off the Black Sea village of Garipce, near Istanbul, Nov. 3, 2014. - REUTERS/Osman Orsal

ISTANBUL — At least 25 migrants from Afghanistan died this week when the boat carrying them to Romania capsized in the Black Sea near Istanbul. The case illustrated the emergence of a new route that smugglers use to take migrants via Turkey into the European Union.

The boat Torun carried 43 Afghan migrants and a Turkish captain when it sank roughly 4 kilometers (2.5 miles) from the mouth of the Bosporus in the early hours of Nov. 3. Six people survived, while 12 were still unaccounted for. Turkish news reports say migrants paid 7,000 euros ($8,700) each for the journey that started in Bakirkoy, a district of Istanbul on the European shore of the Sea of Marmara.

News reports said the Torun was designed to carry a maximum of 10 people and started to sink as soon as it reached the Black Sea. Police arrested two Turks who are accused of getting the boat and sending the passengers on their way. The suspects told police that the Turkish captain initially refused to go out to sea with the overloaded boat but that a suspected Afghan migrant smuggler, identified as Abdullah S. in news reports, forced him to begin the journey. The captain also died.

As a direct neighbor of EU members Greece and Bulgaria, Turkey has long been a transit country for migrants from Asia, the Middle East and Africa seeking a better life in the West. The Syrian conflict, which has sent 1.6 million refugees into Turkey since 2011, is boosting the numbers of people trying to get into EU countries. Improved flight connections between some migrants’ countries of origin and Turkey as well as the easing of visa requirements for citizens of those countries also play a role.

The International Organization for Migration (IOM), an intergovernmental group, said last week around 150,000 “irregular” migrants without proper documents and visas arrived in Europe in the first 10 months of this year. An estimated 3,200 people died while trying to cross the Mediterranean Sea to reach EU territory.

So far, the main routes for migrants coming via Turkey to the EU have led to nearby Greece, either via the Aegean Sea or via the river Meric — Evros in Greek — that runs along the land border between the two countries, and by land to Bulgaria. Now the long and dangerous sea route from Istanbul to the Black Sea coasts of Bulgaria and Romania gains importance as Greece has reinforced its border controls.

IOM spokesman Joel Millman said it was not surprising that migrant smugglers were trying out new ways to move under the radar of law enforcement agencies in the countries involved. “Human traffickers are extremely opportunistic,” Millman told Al-Monitor. “We expect to see all kinds of routes.”

Turkey is under pressure from Europe to do more to reduce migrant numbers. Under an agreement signed last year that is to come into effect in the coming years, Turkey is obliged to take back all “irregular” migrants that enter EU countries via Turkish territory. In return, the EU has agreed to open talks that Ankara hopes could end visa requirements for Turks visiting European countries.

As a consequence, Turkish security forces have begun to clamp down on human traffickers and their passengers. In 2011, just 546 migrants were arrested by Turkey’s coast guard in the Aegean, according to official figures quoted by the semiofficial Anadolu news agency. That figure has risen to 11,400 in the first 10 months of this year alone.

At the same time, Greece, with the help of the European border protection agency Frontex, has acted to make it more difficult for migrants to come into the country. Measures include the erection of a 12.5-kilometer (7.7-mile) fence along the land border with Turkey. Illegal border crossings from Turkey along the so-called Eastern Mediterranean Route have dropped from 57,000 in 2011 to 24,800 last year, according to figures posted on the Frontex website.

With the Eastern Mediterranean Route getting more difficult to use for human traffickers, the groups organizing the illicit transfers are looking for new ways to get to Europe, IOM spokesman Millman said. Competition between different smuggling cartels could also be behind the new Black Sea route, he said. “Maybe it’s a new organization that feels pressure by older organizations,” he said.

Frontex says it is aware of the emerging Black Sea route. “We have noticed some movement toward Romania and Bulgaria, but the numbers are still very low if you compare them with, for example, the route from Turkey into Greece and Bulgaria,” Frontex spokeswoman Izabella Cooper told Al-Monitor in an email in response to questions. Frontex numbers show a total of 148 migrants reaching Bulgaria and Romania via the Black Sea last year and 345 in the first nine months of this year.