Egypt is in close coordination with Europe and is moving in the direction to clamp down on irregular migrants and human smugglers who would be criminalized for the first time in Egyptian law should the said migration law be implemented. 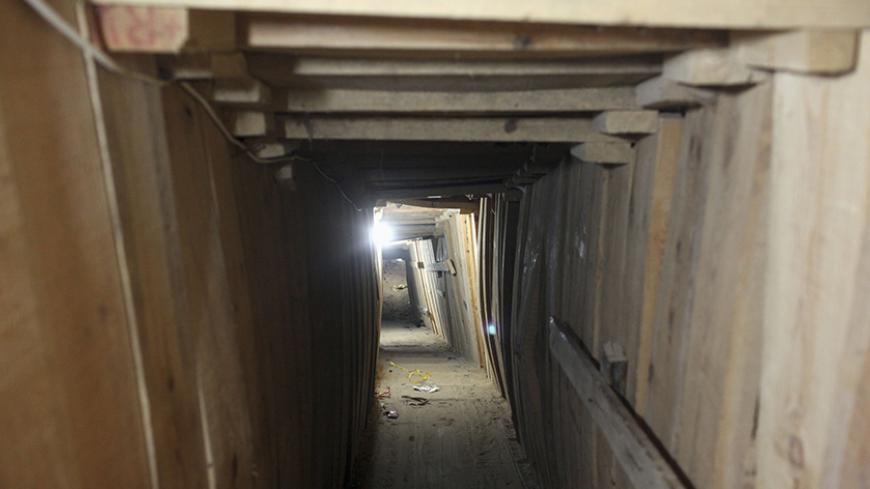 A working tunnel, which is used to smuggle people from Egypt to Gaza, is seen in the Egyptian border city of Rafah, May 13, 2013. - REUTERS/Asmaa Waguih

CAIRO — Youm7 newspaper reported April 26 that the Egyptian government was about to discuss a draft migration law that, if approved, would see irregular migrants — including refugees and asylum seekers fleeing conflict zones — imprisoned for between 15 and 20 years for attempted “illegal immigration.”

The draft, tabled by the Cairo-based Egyptian Union for Human Rights (EUHR) and later sent to the Cabinet, recommended that individuals found entering or leaving Egypt irregularly by sea, air or land (and through cross-border tunnels) face harsh, unprecedented prison sentences.

For now, it is unclear why the EUHR, an organization with demonstrable little experience with migration law, tabled a draft at the same time that a Foreign Ministry initiative, the National Coordinating Committee on Preventing and Combatting Illegal Migration (NCCPIM), is scheduled to launch its own — one that is more likely to become law.

The NCCPIM, launched by Prime Minister Ibrahim Mehleb in March last year, comprises 18 government ministries and has facilitated months of consultations with international organizations and legal experts in preparation for the draft. According to a transcript obtained by Al-Monitor, NCCPIM’s head, former Ambassador Naela Gabr, soberly told a recent steering committee for the EU-Horn of Africa Migration Route Initiative (also known as the Khartoum Process) that the NCCPIM “is not achieving miracles, and cannot achieve miracles.” However, Gabr added, positive steps are being made and the committee is in the “last phase of reviewing the draft law.”

Some observers suggest the committee is the best hope for a more rights-friendly approach to migration law in Egypt.

Mohamed Abdel Salam, a researcher at the Association for Freedom of Thought and Expression, said that the NCCPIM’s stated aims are to “protect migrants, from Egypt and other countries.”

“I feel they want to work with the European Union, the United Nations and other international organizations … so they will work according to international standards,” Abdel Salam told Al-Monitor.

Still, both the EUHR and NCCPIM drafts reveal the first priority of different parties aiming to tackle irregular migration in the Mediterranean — the smugglers. According to the EUHR draft, as well as the stated aims of the NCCPIM, people smugglers would effectively be criminalized for the first time in Egyptian law.

Previously, Egypt has only had the legal infrastructure to prosecute human traffickers (via Law 64 of 2010 regarding Combatting Human Trafficking), meaning that dozens of people smugglers wound up in detention in Alexandria during last year’s peak migration season between April and September and were later released without charge. Several lawyers and researchers in Alexandria shared this information with Al-Monitor, as did refugees detained alongside their smugglers last year.

Mohamed Saeed, executive director of the Egyptian Commission for Rights and Freedoms, told Al-Monitor that in the past smugglers apprehended on the coast were “not even bailed — just released.” Saeed said he is not aware of a single case of a smuggler being prosecuted since unprecedented irregular migration from the north coast began in 2013, despite assurances by the Ministry of Interior that police are cracking down on networks and sending down the perpetrators.

“This is not criminalized by Egyptian law,” Saeed said. “When Egyptians are caught, even the captains and sailors of the ship [smuggling irregular migrants], they are investigated and released.”

Muhammad Kashef, migration researcher at the Egyptian Initiative for Personal Rights (EIPR) in Alexandria said the same but argued that although there is an internationally recognized distinction between trafficking and smuggling, the 2010 law could be enough to start hitting back at some of the more violent, coercive smugglers operating on the north coast. But for reasons as yet unclear, Kashef said that hasn’t happened yet.

“Since the law was published in 2010, nobody has been prosecuted with it,” he told Al-Monitor. “But you can prosecute a smuggler with this law … it’s enough. [Smugglers] are transporting people, abusing them, using them."

Instead, those held in Egypt’s immigration detention estate are generally held “in a form of administrative detention until they are deported or their cases are otherwise resolved by immigration authorities,” according to the Geneva-based Global Detention Project’s research on Egyptian detention practices.

The latest developments suggest Egypt is moving more in line with European priorities. While Egypt prepares new legislation to prosecute smugglers, EUROPOL, the European Union’s law enforcement agency, has established a task force for busting smuggling networks. In meetings last week, Egyptian President Abdel Fattah al-Sisi and European Commissioner for Home Affairs and Migration Dimitris Avramopoulos also discussed a possible “dialogue” that “at first … will concentrate on addressing the trafficking of human beings as well as the smuggling of migrants." Sisi has meanwhile called for EU investments to combat migration.

Questions remain about Egypt’s detention of refugees, asylum seekers and migrants — and they may remain after a draft law on migration is finally passed. As Europe pushes for more outsourcing this year, debate will continue about how appropriate it is to externalize European borders in coordination with countries — like Egypt — with more established records of abusing the rights of irregular migrants, as opposed to prosecuting smugglers.

Abu Ammar works as a "simsar" (broker) in 6th of October City, a satellite city to the west of Cairo that is home to thousands of Syrians. He is a Syrian refugee originally from Homs, and it is his job to connect would-be migrants with a smuggler, before taking a cut from the trip’s profits. Abu Ammar is skeptical that Egypt really intends to punish the smugglers and stop irregular migration.

“Money talks. As long as there are dollars involved, the law will not be put in practice,” he told Al-Monitor, adding that, in Egypt’s case, this is not as simple as talking about a state crackdown on smuggling networks. “Of course, there is some kind of coordination [between security forces and smugglers], otherwise they wouldn’t let people leave the coast.”

Kashef, on the other hand, suggested Egypt may be finally turning against the smugglers — though this is new. He said that four smugglers have been detained on the north coast since April, although it is not yet clear what the authorities plan to do with them.

“I think that the government is now trying hard to control this,” he told Al-Monitor, pointing to bolstered coordination with Europe as a possible reason. “They are trying to close the borders … because this is like the back door to Europe.”