Rather than an accidental stopping point for refugees and migrants, Tunisia, with new asylum legislation, can become a destination country. 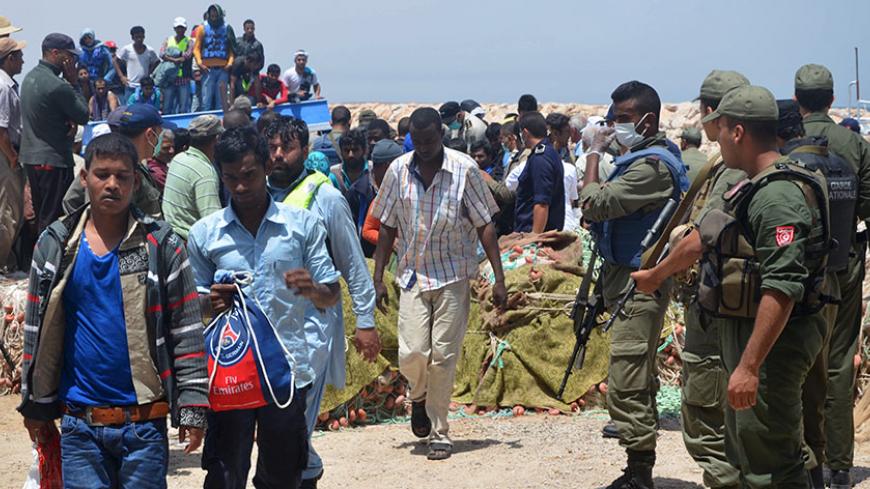 Undocumented migrants disembark in Ben Guerdane, Tunisia, after being rescued by Tunisia's naval forces in a failed attempt to cross into Italy from neighboring Libya, June 10, 2015. - REUTERS

TUNIS, Tunisia — While a lot of focus in the recent migration debate has been on Europe, many of the southern Mediterranean countries are equally struggling with the situation. Tunisia, which is next to Libya, is increasingly trying to deal with, and prepare for, the influx of people.

“God Bless Tunisia,” said “Annie,” a Nigerian who is too afraid to reveal her real name. She added, “And God punish Libya!” Annie was smuggled through Libya via Niger, eventually ending up in the Libyan coastal city of Zuwara, which has become a center for human trafficking, only 60 kilometers (37 miles) from the Tunisian border. A majority of the asylum seekers arriving at the Tunisian borders enter, often unintentionally, via boats after being rescued at sea during their perilous journey from Libya. Upon arrival, each person’s status is assessed in order to determine whether the person is a refugee, which means a person running from persecution or conflict, or a migrant, i.e., someone leaving their home country in search for better economic opportunities. Tunisia is primarily a transit country. Most people arriving here are not aiming to stay but to continue to Europe. According to the United Nations High Commissioner for Refugees (UNHCR) September 2015 fact sheet, there are currently around 928 registered refugees and asylum seekers in Tunisia, primarily from Syria.

Until a person’s status has been determined, the person is considered an asylum seeker. However, as Tunisia does not yet have an asylum law in place, the UNHCR assists Tunisian authorities in the refugee status determination process. Each person’s background is documented before determining their legal status. Their story is scrutinized, and their papers, if there are any, are assessed before a final verdict is made. People identified as refugees are protected by the 1951 Refugee Convention, which not only defines who is a refugee, but also states their rights and the obligation of the host country. However, the refugee status does not include residency in Tunisia, which is only authorized by the Tunisian Interior Ministry. Without a residency card, it is difficult for a refugee, often also without identification cards, to receive a work permit in a country already struggling with high unemployment rates. “We are trying to have a creative approach to the work situation for refugees,” said Nabil Benbekhti, senior protection officer at UNHCR. Today, most refugees work in the informal sector, but there are livelihood programs that aim to make refugees reach self-sufficiency by offering tailored training curriculum. There is also a startup that is in the process of hiring asylum seekers and refugees for maintenance work in domains such as gardening, plumbing or cleaning. Some initiatives have also included providing Syrian families with goats in order for them to produce cheese and potentially become self-sustaining.

Beside refugees, there are also migrants looking for better opportunities among the people rescued at sea. Annie is one of the migrants saved this summer and is one of the ones who decided to return to Nigeria. Despite the lack of opportunities, she would like to go back home to her village, even though it would mean she would likely return to her previous job, braiding women’s hair. “We assist the people who wish to return back home,” said Lorena Lando, chief of mission at the International Organization for Migration (IOM). Through the relevant embassy, a travel document is secured and migrants can safely return home with the help of IOM. About half decide to return home, while the other half, the ones not able or willing to return home, either try to stay in Tunisia, with an illegal status, or try returning to Libya for another attempt at crossing the sea.

According to the September 2015 UNHCR fact sheet, seven boats, with around 900 passengers, have been rescued at sea outside the Tunisian coast during the first six months of 2015. Of them, 147 claimed asylum. Most of the boats attempting to cross the Mediterranean Sea depart from Libya. Due to the country’s civil war, the smugglers can operate fairly freely. According to Lando, about 80% of the migrants who risk their lives by boarding the boats from the Libyan shores and arrive in Tunisia are looking for better economic opportunities, while the rest are refugees from Eritrea or Somalia or war-torn Syria. (The broader statistics of departures from Libya suggest a lower figure, where about 50% are migrants and 50% are refugees.) Their goal is Europe, but often due to engine breakdown or boats not seaworthy, they end up outside the southern Tunisian coastline, where some are saved by the Tunisian coast guard. That is what happened to Annie. She was saved after four days at sea. Now she is waiting to return to Nigeria.

Tunisia has seen a clear shift in its migration. Before 2011, there were less than 100 refugees arriving, then primarily from Algeria, Western African countries including the Ivory Coast or Palestinians. However, the Libyan civil war, which began in 2011, changed the situation. What happens in Libya will have a direct effect on Tunisia, explained Lando. Most foreigners in Tunisia are Libyans. On arrival they can stay for three months. However, in order to work, they need to apply at the Interior Ministry for a work permit. The exact number of Libyans in Tunisia is difficult to estimate but is believed to be roughly 300,000, said Lando.

With no end in sight for the Libyan civil war, Tunisia is in dire need of asylum legislation. Since 2011, the UNHCR has been assisting the small Mediterranean country with training and technical assistance ahead of the drafting of an asylum law. Since 2012, the two draft texts have been prepared and are ready to be approved by parliament. “An asylum law will be adopted during the year of 2016,” said Belgacem Sabri, secretary of state in charge of migration affairs and social integration. When enacted, the refugee status process will become the responsibility of the Tunisian authorities and a national protection system will be put in place. “More and more, the need for a protection system is reaffirmed, and this is our aim, to provide Tunisia with a system that is adapted to its capacity and needs,” said Benbekhti. “Tunisia has a role to play in the region in offering a protection space.”

A national five-year migration development strategy includes protecting migrants’ rights and enhancing the contribution of migration to socio-economic development on a local, regional and national level. The strategy is to involve diasporas in the social, economic and political development of the country, said Sabri. Legislation on migration dates back to 1968 and needs to be amended to meet today’s dynamics. “Tunisia needs to prepare long term for a larger influx of migrants,” said Lando. Mobility is a never-ending process, and it is important to see the positive impact migration can have and to research its underlying socio-economic factors, she added. Tunisia, due to its democratic transition and geographical location, can increasingly turn into a destination country, which would require long-term measures from the Tunisian government, concluded Lando.