Though overall arrivals in Italy from North Africa are down, undocumented immigrants from Tunisia have spiked in recent months as Tunisians flee a lack of opportunities in their home country. 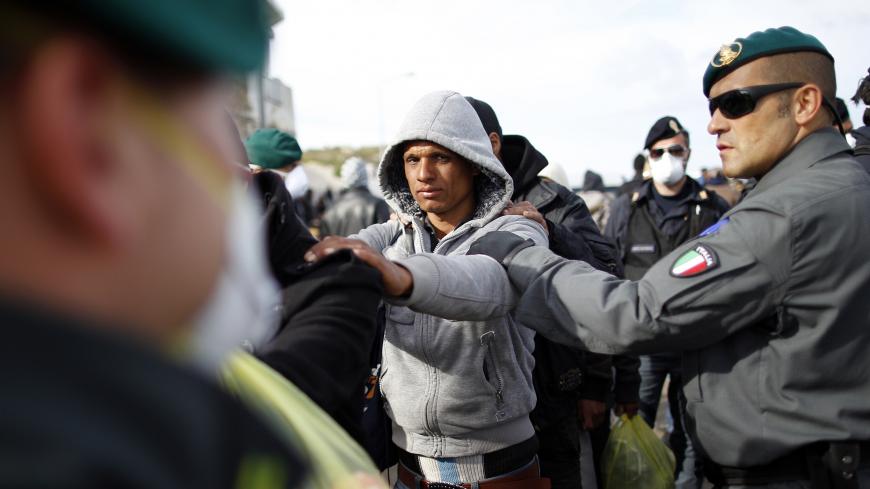 Residents of the Tunisian coastal city of Kelibia often swell with pride when telling visitors how they can see Italy from their homes on a clear summer day. But beyond offering a pleasant view, the close proximity of Europe has tempted the young to emigrate clandestinely to start new lives on another continent.

“Tunisia is finished,” said Omar Aydi, 25, who traveled by boat from Tunisia to Italy despite not having a job lined up. Aydi, who spoke to Al-Monitor via social media, now lives with a friend in Milan and is still searching for work.

This clandestine migration between Tunisia and Italy has spiked in recent months. Overall arrivals in Italy from North Africa are down, but Tunisians, many of them fed up with the lack of opportunities in their home country, are traveling to Europe at higher-than-usual rates.

Migration analysts Al-Monitor spoke with question such a large rise in the number of Tunisians landing in Italy. Some speculate that Tunisia is hoping for a migration deal with Italy in order to garner financial benefits, similar to the one struck between Libya and Italy. Others believe Tunisia’s economic stagnation has led Tunisians to seek opportunities elsewhere.

“The [Libya] agreement has changed the traffickers into controllers,” said Stefano M. Torelli, a visiting fellow at the  European Council on Foreign Relations, referring to the former human traffickers who are now working to prevent the problem on Libyan shores.

Libya had previously been the main point of departure for migrants seeking to land on Italian shores. The Italian strategy, largely implemented in the first half of 2017, calls for the Libyan coast guard to crack down more heavily on migrants and make its own deals with local militias for their help. These efforts combined have stemmed much of the flow. In return, Italy gifted Libya’s coast guard six patrol boats, with another three on the way. There have also been reports of financial assistance to militias present along migration routes. The cooperation between Libya, Italy and the European Union is going to cost 285 million euros ($339 million), according to Mario Morcone, an official in Italy’s Ministry of Interior.

No such comprehensive deal currently exists between Tunisia and Italy, but Italy’s Prime Minister Paolo Gentiloni said the pre-existing deal in place since 2012 is helping control the increase in illegal immigration by Tunisians. The 2012 deal allows Italy to “accelerate repatriation” of Tunisian nationals. It came about after emigration from Tunisia spiked following the 2011 revolution.

For Tunisians hoping to travel to Europe to escape a dearth of opportunities at home, the water routes from Tunisia are closer and are not heavily patrolled. The trip from the Tunisian coastal city of Zarzis to the Italian island of Lampedusa is approximately 160 miles. The northern Tunisian city of Kelibia and the Italian island of Pantelleria are even closer at only 44 miles.

But the journey across the Mediterranean can also be deadly. On Oct. 8, at least 45 Tunisians drowned after their boat collided with a Tunisian navy ship and sank. Though this episode was particularly deadly, these journeys are typically successful. From Jan. 1 to Nov. 1 of this year, more than 111,000 landed safely, while 2,639 migrants died attempting to travel from North Africa to Italy, according to the International Organization of Migration (IOM), a UN agency.

European border authorities are struggling to come up with strategies to prevent these deaths and push back against illegal migration.

Tunisia’s democratic transition has been widely praised, but seven years after the revolution against kleptocratic dictator Zine El Abidine Ben Ali, Tunisia’s elected government is struggling to answer the demands of those who took to the streets in 2010-11. Back then, protesters chanted about work, freedom and dignity. Now with the country’s unemployment rate hovering at 15.3%, scores of young Tunisians, who face a youth unemployment rate of approximately 35%, are searching for opportunities in Europe.

“The financial crisis in Tunisia is getting worse every day,” said Mounib Baccari, a social activist focusing on migration issues. “Maybe the Tunisian government wants to have a deal with the EU.”

But some analysts dismiss Baccari’s suspicion. “I don’t think they need to go into such a Machiavellian style,” said Lorena Lando, the Tunisia mission chief for the International Organization of Migration. “It’s in the interest of all to have a stable Tunisia,” she said, hinting that Tunisia recognizes that Europe considers it to be a vital area of interest in the Mediterranean.

Despite the international community’s intention of promoting stability and job growth, many youths who manage to find work in Tunisia can end up underemployed. The World Bank reported in 2017 that of the Tunisians who have jobs, 41% of them are underemployed: either nominally self-employed, unpaid or working under the table.

Additionally, inflation is on the rise, accelerating from 5.5% to 5.8% between September and October. The prices of food staples like fish, oil and vegetables are increasing at accelerating rates, putting even more strain on the already-pressured Tunisian economy.

Secretary of State for Migration and Tunisians Abroad Adel Jarboui spoke on Nov. 1 about “the shared responsibility between countries of origin and host countries,” but a comprehensive deal with the Italian government to limit illegal immigration from Tunisian shores has yet to come about.