The recent memoir of an aide to former Turkish President Abdullah Gul could be a harbinger of his return to politics. 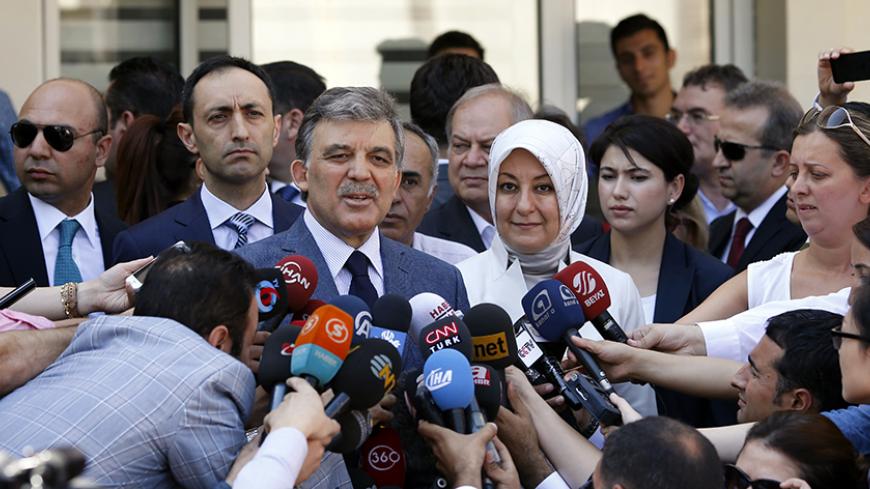 President Abdullah Gul and his wife, Hayrunnisa, talk to the media as they leave a polling station after casting their votes for president in Ankara, Aug. 10, 2014. Gul, who did not run for re-election, was succeeded by Recep Tayyip Erdogan as president. - REUTERS/Umit Bektas

“It is an attempt to throw a hand grenade at our party" is uncommon wording for a book review; this evaluation, however, was not written by a literary critic but by a legislator from the Justice and Development Party (AKP) blindly loyal to Turkish President Recep Tayyip Erdogan.

The book referred to as “a hand grenade” is the memoir of Ahmet Sever, the spokesman for Erdogan’s predecessor, former President Abdullah Gul.

The book, “12 Years with Abdullah Gul,” made it to bookstores June 14 and provided new shock waves for Turkey's already-overloaded political agenda. The front pages of many dailies are full of excerpts from the book. Also, talk shows on various TV channels allotted prime time for a debate on the book; Sever was interviewed by anchors on various TV channels.

I prefer to describe the book not as a grenade but rather as a bombshell that has deeply impacted the Turkish political agenda; the collateral damage from a bombshell can be much stronger and deeper than one from a grenade.

The book revealed the long-existing differences many believed had abounded between the two key Turkish leaders, who also were co-founders of the AKP. The relationship between Gul and Erdogan had long been likened to Russia's Vladimir Putin-Dmitry Medvedev alliance as Gul and Erdogan were considered to be “close comrades.” However, Sever’s book has dispelled all such remaining thoughts.

Although the book was read and corrected by Gul before its publication, there are still some resistant souls who express their disbelief about its authenticity. Turkish Energy Minister Taner Yildiz is one of them. Yildiz, another fervent Erdogan loyalist and a deputy from central Anatolian province of Kayseri — Gul's hometown — criticized Sever and said he did not agree that Gul and Erdogan had major differences.

For me, this reaction was a reflection of the tremor the publication of the book caused. AKP authorities used to downplay widespread suspicions that there was a considerable wedge between Erdogan and Gul. Thus, if such claims are true, they could shatter the image of the Islamist unity of the AKP and open insurmountable breaches within its ranks.

What has been more damaging was the timing of the publication, coming on the heels of the June 7 general elections where the AKP lost its parliamentary majority. The responsibility for the relative failure was blamed on Erdogan’s and Prime Minister Ahmet Davutoglu’s campaign performances. The publication of “12 Years with Abdullah Gul” projects the name of the former president and AKP co-founder as a remedy for the turmoil the AKP may be soon facing.

Personally, I had no qualms about the validity of the content of the book for two basic reasons: I knew about the writing process behind the book and therefore already was informed about many of the interesting and peculiar anecdotes in the book, and I also had met with Gul during and after his presidency.

Sever is a colleague and close friend. The professional relationship between us goes back nearly 30 years. He told me about his intention to write his memoir, as he had been the first witness to events since the day he began working as an adviser to Gul when Gul became the foreign minister of Turkey in March 2003. Gul had preceded Erdogan as prime minister in November 2002 but vacated the post for him five months later and served as foreign minister until 2007. Then he was elected as the 11th president of Turkey, and Sever became the spokesman for the president.

Erdogan succeeded Gul after the presidential elections in August 2014, and Sever’s job came to an end. In autumn 2014, he sat to write the story of the behind-the-curtains power struggle within the ruling AKP. This struggle pitted Gul against Erdogan on many occasions that were not disclosed to the public. During the writing process, Sever told me about a number of anecdotes in which Gul and Erdogan adopted different positions. I shared some of this information in a number of Al-Monitor articles without naming the source.

Moreover, I can attest to the truth in Sever’s book — which has created a considerable commotion within Turkish society and in the ranks of the AKP — thanks to my encounters with Gul. I had listened a lot to deep background stories from him on issues of major importance ranging from the AKP government’s Syria policy, its reaction to the developments in Egypt following the overthrow of President Mohammed Morsi and the Muslim Brotherhood government to his reactions to the Gezi protests. On all these developments that rocked the foundations of AKP rule, Gul told me about the divergences of opinion between himself and Erdogan.

I never used such information naming him as the source, but I immensely benefited from this knowledge in assessing the political developments concerning Turkey’s domestic and foreign policy. Thus, I can verify the validity of the substance of Sever’s book that triggered various reactions.

One of the most interesting and striking anecdotes in his book that might sound interesting to the international public is Gul’s rebuke of Erdogan and Davutoglu and accusing them of behaving as prime ministers and foreign ministers of Syria and Egypt, instead of Turkey. In an interview with the daily Hurriyet, Sever stressed this apparent divergence between then-President Gul and Erdogan and Davutoglu.

Another striking anecdote that made a “bombshell blast” within AKP ranks is Gul’s disclosure of his intent to re-engage in active politics in order to correct what he sees as fatal mistakes. About a year ago, he expressed an extreme discomfort about the way the AKP government was handling Turkey’s mounting problems.

“In a short period of time, I can take back Turkey to those days when its star glittered. I can reactivate the process with the European Union. I can correct the mistakes made in foreign policy. The country is too polarized. I can overcome that and push for further democratization. And, without any hesitation, I will send four ministers accused of embezzlement and corruption to the supreme court to be tried,” Gul said at a meeting with his advisers, according to the book.

All this matters a lot for Turkey’s friends abroad, particularly in the Western world. Even more important than that, it matters for pro-democratic circles in Turkey. Yet, there is also a deep disappointment in Turkey on Gul’s alleged passive attitude toward Erdogan and his government despite being aware of all the wrongdoing, as Sever’s book reveals.

Some consider the book as Gul’s “battle cry” for a comeback to politics to the discomfort of Erdogan and people around him.

That is why “12 Years with Abdullah Gul” is not just a memoir, but it is also considered to be a “bombshell” for the AKP and therefore for Turkish politics.

Can Gul have a comeback following such a low-profile exit?

Given the vicissitudes of Turkish politics, nothing is impossible!