Moscow continues to see the Syrian president as an important ally in the struggle against extremists, and its support for an inclusive national dialogue prompted the Russian Foreign Ministry to host two inter-Syrian consultative meetings that appear to have played a positive role. 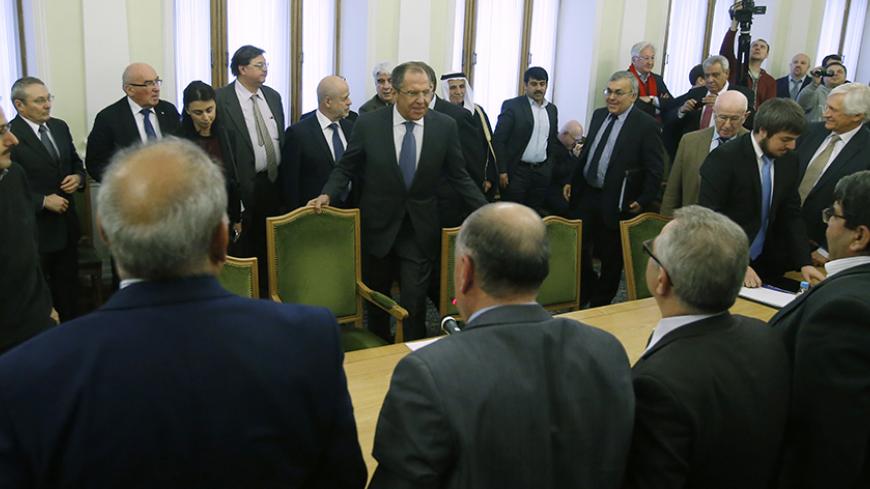 Russia's Foreign Minister Sergey Lavrov (C) attends a meeting with members of the Syrian opposition and the Damascus government ahead of talks that attempt to revive peace plan efforts in Syria, in Moscow, Jan. 28, 2015. - REUTERS/Maxim Zmeyev

The well-known recent gains by jihadists in Syria and Iraq, both in the military and the political spheres, have become an issue of serious concern for the Russian leadership. Unlike the West and many regional partners in the fight against terrorism, Russia continues to see Syrian President Bashar al-Assad — possibly to an even greater extent than before — as an important ally in this struggle, and one who is almost single-handedly leading the fight. This is not the main point of contention, however. If those who refuse to cooperate with the government in Damascus on this basis believe that the jihadist wave will subside with Assad’s departure, in Moscow they are convinced that this will mean victory for Islamist radicals who will come to power in Damascus and then expand.

As is known, Moscow’s support for an inclusive national dialogue as the only possible way out of the Syrian crisis prompted the Russian Foreign Ministry to hold two inter-Syrian consultative meetings this year in the Russian capital with the participation of a number of opposition and civil society groups, as well as a delegation of the Syrian government, in which I acted as a moderator. These meetings appear to have played a positive role, if only because the conflicting parties listened to one another for a few days. They reaffirmed their commitment to exclusively political and peaceful means to resolve the crisis, to the principles of the Geneva Protocol dated June 30, 2012, and to the need for a Geneva III conference. They even managed to (almost) agree on a number of very sensitive issues and that in the next phase of consultations, they would begin discussing the most difficult problem, namely a transitional governance system for the country. Intransigence on a number of the most pressing challenges interrupted the dialogue and prevented progress, however.

In the course of the second meeting, held April 6-9, representatives of the opposition forces worked to develop a joint document to submit to the government delegation, but differences continued to divide them regarding the current situation (for instance, the withdrawal of foreign fighters and militias from the country) and the future of Syria (for example, whether the country will be a unitary or a decentralized federal state). The document produced at the "Moscow platform," which consisted of 10 principles, was initially agreed upon by all parties, only to be subsequently disavowed by a number of them, who were dissatisfied with the obstinacy of the official delegation. Still, the meeting was a unique achievement that no other intermediary country can afford to hold in such a format, namely with the participation of Damascus. Some of the Syrian opposition representatives also sent a letter to UN Secretary-General Ban Ki-moon on the need to convene a Geneva III conference.

After the second meeting, the question arose as to whether it would be worth continuing meeting in the same format. There is no answer to this question yet, but it is possible that new initiatives are needed, and in Moscow they are currently pondering this. Russia continues to have influence on the conflicting parties and encourage them to search for compromises. In this context, Moscow is looking closely at the efforts of the UN special envoy for Syria, Staffan de Mistura, who on May 5 began in Geneva a six-week round of meetings with representatives of various Syrian groups and the Syrian government with the aim of then developing a road map for a political settlement in Syria.

After a meeting with the special envoy, Moscow-based Qadri Jamil — secretary of the People’s Will Party and a member of the leadership of the Popular Front for Change and Liberation — declared, "The positions of the parties are well known and further consultations will yield no results unless practical steps are taken to start implementing the commitments of Geneva I, held in 2012." The opposition member believes that there is now a need to make the warring parties fulfill the Geneva Protocol, as "appeals are no longer sufficient and the talks will not give any result." The diplomatic corps in the Russian capital are only trying to guess whether and to what extent Jamil’s words reflect Moscow’s official position.

Without waiting for a decision by the Kremlin on whether a Moscow III is necessary, a group of opposition members — led by Paris-based Randa Qassis, chairwoman of the Movement for a Pluralistic Society — seized the initiative to hold consultation meetings (leading some Russian analysts to suggest that French government agencies are behind this idea). They appealed to Kazakhstan President Nursultan Nazarbayev to organize such an event in Astana. Moscow has never sought to monopolize the role of mediator and reacted favorably to this initiative and others — including meetings in Cairo — aimed at ending the violence in the country. The Syrian government, however, has not expressed interest in participating in the meeting in Astana, which took place May 25-27. The majority of the 27 participants representing several opposition groups also managed to agree on a document of principles to solve the crisis.

Two of those principles are especially significant. The first is the decentralization of Syria, as well as granting the Kurds and the Assyrians the right to "defend their territory against any form of terrorism." The experience of the negotiations in the "Moscow platform" indicates that this idea met with sharp opposition from Arab nationalists in both the government and part of the opposition. And the Kurds, while speaking of Syria's unity, are very unlikely to renounce their already de facto autonomy in the country’s northeast.

The second is the withdrawal of all foreign fighters. If we return again to the experience of the "Moscow platform," I highlight that this statement caused heated debate among the participants. Both representatives of the government in Damascus and a whole range of opposition groups are categorically opposed to equating Hezbollah’s units with foreign jihadists. The reason is that without the help of the Lebanese Shiite militia, the country could have already fallen victim to the Islamic State (IS) and Jabhat al-Nusra. In addition, Hezbollah fighters were invited by the legitimate government and if — purely hypothetically — their units leave the country in an organized fashion on orders from Beirut, there is no such force that would be able to compel all foreign jihadists to exit Syria.

It is not surprising that not all participants in Astana agreed to sign such a document, with six of them writing a separate statement. It is unclear whether the Kazakh government intends to convene Astana II.

As for Moscow, the rising number of extremists traveling to fight in Syria — both from within Russia and from Central Asia — is a subject of growing concern. In this context, the high-profile case of Col. Gulmurod Halimov — the commander of the Tajik elite paramilitary police unit who fled Dushanbe along with a dozen of his subordinates to join IS — was an unpleasant surprise for both the Central Asian governments and Russia.

Not only has the commander, who clearly has no lack of charisma and has been trained in Russia and the United States, joined the ranks of the jihadists, but he has also addressed his compatriots with an appeal to come to wage jihad in a video on the Tajikistan Live web portal. Many Russian analysts fear that the colonel-turned-jihadist’s appeal can attract, in particular, some of the migrant workers from Tajikistan in Russia, whose total number exceeds 1.2 million. They can either join the 4,000 Central Asian nationals already fighting in Syria for IS, or enter the so-called sleeper cells that IS is establishing in the territory of many countries. I was told about the existence of such cells by a former IS member in Syria who spoke on condition of anonymity. As suggested by Russian analyst Arkady Dubnov, people could be drawn by the criticism leveled at Dushanbe for prohibiting Muslims "to fully celebrate their ceremonies, as well as for closing down mosques" and persecuting the legitimate Islamic Renaissance Party, which "is an alternative to radical Islamic groups."

It is easy to assume that all of this was discussed during a recent meeting between President Vladimir Putin, Foreign Minister Sergey Lavrov and US Secretary of State John Kerry in Sochi. Kerry stressed that Syria will not return to peace until there is a political transfer of power. Russia and the United States agreed to continue their dialogue to find a settlement for Syria in the coming weeks. Assessing the outcome of the meeting May 29, US Undersecretary of State for Public Diplomacy and Public Affairs Richard Stengel said that the interests of Moscow and Washington may overlap when it comes to the situation in Yemen, Libya, Syria and the agreement with Iran.

Russia is ready to develop cooperation with the West and the countries of the region in the fight against terrorism. Speaking May 31 on the program "At the heart of events" on Russian TV channel TVC, Lavrov stated that for this cooperation to work, it requires, first of all, "developing a strategy based on a fair joint assessment under the auspices of the Security Council," and second, "adopting resolutions that will legitimize the actions to be taken to combat this threat," be it IS, Jabhat al-Nusra or any other group.