Russia is set to proctor a meeting of Syrian opposition figures, who will then meet with representatives of the Syrian regime in an inclusive and open dialogue with no preconditions, as a step toward resuming the Geneva deliberations. 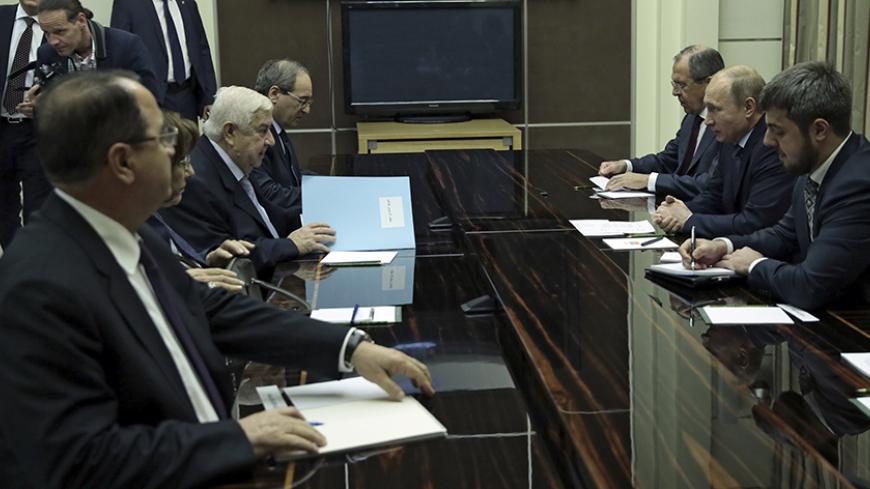 The organizers envision an unrestricted and inclusive dialogue just for Syrians and with no preconditions, with an agenda open to any issues involved in a potential Syrian settlement. The Russian Ministry of Foreign Affairs is to provide a venue but not interfere, leaving the Syrians free to discuss all issues, including counterterrorism and a political solution.

The dialogue in Moscow is not seen as an alternative to the Geneva process or the Geneva meetings, two of which have been held, with the second producing zero results. Moscow has declared its commitment to the principles of the June 20, 2012, Geneva Communiqué, which the UN Security Council approved in Resolution 2118. The meeting will be held in the framework of that commitment, free from external interference, a principle proclaimed by Russian diplomacy.

Far from an alternative to the Geneva format, these meetings are intended as a potential step toward resuming the Geneva deliberations, provided the Syrians manage to agree on something — anything — among themselves. Moscow believes an agreement could be reached to end the bloodshed that jeopardizes the future of the Syrian nation and its people. In fact, there clearly are Syrian patriots wishing to preserve the nation’s integrity on the many sides of the conflict, among the opposition and regime loyalists alike.

The Russian Ministry of Foreign Affairs invited opposition figures to the meeting on an individual basis to avoid creating rivalries and prioritizing some organizations over others. Therefore, the meeting’s attendees will not represent any specific organizations, but should they wish to express a consolidated opinion as a group, they would naturally be able to do that. Indeed, the arrangements call for an open dialogue with equal participation by all attendees.

No official representatives of the Russian government are to attend the meetings. It is up to Syrians themselves to decide what should and what should not be discussed. No one will exert any pressure on the Syrians. Damascus has agreed to send a delegation, though it is yet unclear who will be included.

Likewise, it is not yet clear which of the opposition invitees have accepted and which have declined. The organizers presume that a refusal to take part in this dialogue will suggest that the holdouts fail to offer constructive positions and are unwilling to use even the slightest opportunity to reach agreement to end or reduce the violence and resolve some humanitarian issues at the very least. A few analysts do not rule out the chance that certain quarters in a number of Arabian Peninsula states might try to foil the meeting.

Despite the United States’ frequent criticism of Russia’s Syria policies, the US administration has supported Moscow’s initiative. On Jan. 14, 2015, at the beginning of his meeting with Staffan de Mistura, the UN secretary-general’s representative for Syria, US Secretary of State John Kerry went so far as to say, “We hope that the Russian efforts could be helpful.” Moscow took his words as a signal that Russia and the United States could continue constructive cooperation on Syria in the way that they cooperated in the international efforts to destroy Syria’s chemical arsenal. Russian analysts believe that as the West faces a dramatic escalation of the threat posed by international networks of Islamic terrorism, restoring Russian-US cooperation will be necessary to fight that threat.

Moscow has also noted a completely new emphasis in Kerry’s remarks on President Bashar al-Assad and his regime, suggesting that the hitherto irreconcilable US approach has mellowed. In particular, Kerry noted, “It is time for President Assad, the Assad regime, to put their people first and to think about the consequences of their actions, which are attracting more and more terrorists to Syria, basically because of their efforts to remove Assad.” It means that Moscow’s and Washington’s positions are no longer as antagonistic. In fact, the Russian position can in no way be interpreted as offering unconditional support to Assad personally. Nevertheless, not only Moscow but the international community recognize Assad as a legitimate head of state who enjoys a sizable following among the nation’s population and who is nowadays, according to Moscow, a natural partner of global and regional powers in the fight against terrorism.

Under the new circumstances, one might also refer to a narrowing gap between Moscow and Brussels in regard to the Syrian crisis. According to the Arabian news outlet Al-Akhbar, on Dec. 11, de Mistura and the EU foreign ministers confirmed that the European policy on Syria had shifted, meaning that an opportunity emerged for a European relationship with Assad. The same publication suggests that de Mistura and the European Union are concerned about the policies of Turkey, which remains “the only country still facilitating the passage of foreign fighters to Syria.” This concern has only grown after the wife of a terrorist who was killed after attacking a kosher deli in Paris, currently wanted by the French police, allegedly chose the Turkish route to flee to Syria.

Add to that a global media uproar after an article by Emre Uslu was published in Today’s Zaman on Jan. 14. Uslu quotes a former agent of the Turkish National Intelligence Organization candidly discussing the organization’s involvement in funneling weapons from Libya to groups operating under al-Qaeda leadership, plus its work to facilitate the movement of foreign jihadists to Syria. Such allegations cannot destroy the relationship of close cooperation recently established between Moscow and Ankara. However, they have not gone unnoticed by Russian analysts. Meanwhile, despite all its differences with Ankara on the Syrian issue, Moscow cannot ignore Turkey’s ongoing role as a highly influential player on that field. Among other things, this is evidenced by the fact that Khaled Khoja, a businessman born in Damascus who was elected the new chairman of the National Coalition of Syrian Revolutionary and Opposition Forces in January, is in fact a Turkish national.