From Omar to Hussain: Why Iraqis are changing their names

Intensification of Iraq's sectarian divide is forcing increasing numbers of people to change their names to avoid harassment and death. 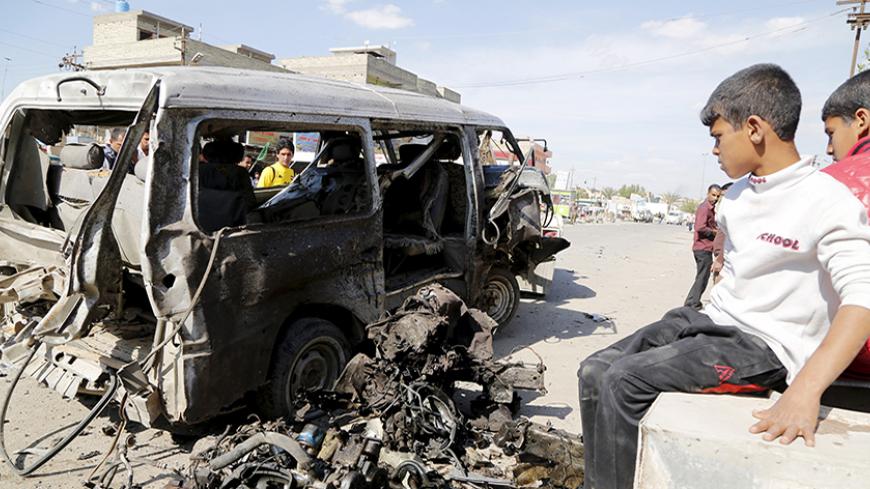 Boys look at a destroyed car at the site of a car bomb attack in Habibia district in Baghdad, March 23, 2015. - REUTERS/Wissm al-Okili

BABIL, Iraq — The Popular Mobilization Units announced Labbayka Ya Hussain (At Your Service, Hussain), the military offensive to liberate Anbar province from Islamic State (IS) control, on May 25. The operation's name — invoking the killing of Imam Hussein ibn Ali in 680 and the call to take revenge on his killers — has raised a debate over the sectarian connotations of names in Iraq. Many Shiites consider IS members the grandchildren of Imam Hussein’s killers. The title has angered Sunni tribal leaders in Anbar, who find it inapppropriate for a military offensive designed to liberate a Sunni-majority province.

This episode is nothing new in Iraq. The use of religion and names with sectarian affiliations has been clearly reflected in the country's political and social life. Since the overthrow of President Saddam Hussein's regime in 2003 following the US-led invasion, sectarian conflict has intensified. Because one can often tell a person's religious affiliation from his or her name, many Iraqis, Shiites and Sunnis alike, have changed them when they move to an area where they are in the minority. They do so to avoid possible harassment and even death in the event of sectarian violence, as happened in 2006 when sectarian killings escalated between Sunnis and Shiites. In Baghdad province, unidentified bodies were found daily.

The Emirati newspaper Akhbar al-Khaleej reported March 1, “Three thousand Iraqi citizens bearing the [Sunni] name Omar asked that their name be changed for fear of being killed.” The author and columnist Ali Hussein wrote March 9 in Al-Mada about such people, calling them “simple people” who have been pushed by sectarian conflict to essentially “abandon their origins.”

Hussein told Al-Monitor, “This phenomenon is attributed to the emergence of armed groups, be they Sunni or Shiite, and their use of violence against each other on the basis of religious and sectarian beliefs.” He added, “The name-changing phenomenon spread widely following the occupation of the Sunni-majority city of Mosul by IS on June 10, 2014, the displacement of residents, and the displacement of the population from the Sunni-majority cities of Tikrit and Anbar to the Shiite-majority city of Baghdad and other Shiite cities in central Iraq as a result of war and occupation.”

Hussein also asserted, “Most of the names that are being changed refer to Sunni personages, such as Omar, Abu Bakr and Osman. There is seemingly a veto on these names in the Shiite central and southern cities.” For some Iraqis, a simple name change does not suffice. “Some people were forced to forge IDs and get two names, one to be used in Shiite areas and another to be used in Sunni areas,” Hussein said.

In a phone interview with Al-Monitor, Ismail Ali, a Babil lawyer, explained that to legally change a name, one must submit an application to the courts, including an explanation for the desired change. An announcement of the change must then be published in newspapers, after which the procedures to register the new name for citizenship and ID purposes can be completed. Iraqi newspapers contain a section devoted to announcements by people seeking name changes for political or social reasons and changes in status.

Essam al-Asadi, a lawyer from Babil, told Al-Monitor that many Sunnis displaced to Shiite areas had sought his services. “No one discloses the reason behind the name changing, but I believe that there are political and sectarian motives,” Asadi said. “Changing the [Sunni] name Omar to [the Shiite] Zayn al-Abidine would only take place for dogmatic reasons.” Asadi took from his briefcase some of the legal documents for people who changed their names, apparently for political reasons. They included a person called Baath who changed his name to Mohammed because his given name derived from the ruling party under Saddam Hussein.

“Names in Iraq are closely linked to Iraq’s political eras. Under the communist and leftist period in Iraq, in the 1960s, many Iraqis called themselves after leftist and communist symbols,” said Mohammad Qassem, a social researcher. “During the nationalist era and Baath Party control, from 1968 to 2003, names linked to the regime’s political ideology emerged, and nationalist names rather than Islamic ones became popular.”

Zainab Hassan, a civil servant involved in issuing IDs in Babil, told Al-Monitor, “In the cities where there is sectarian heterogeneity, names are being changed for political reasons rather than sectarian reasons. Names referring to the symbols of the former regime — such as Saddam, Baath, al-Qadisiyah [the Iran-Iraq War, launched by Hussein] — are being changed. There are also social reasons, such as obsolete names and those that bear socially rejected connotations, like those referring to animals.”

It is difficult to speak about the issue with someone who has changed his or her name, because it is a personal matter with ethical and other sensitive aspects. Those who go to such lengths are typically reluctant to disclose the real reason behind their decision. Journalist Ahmed Jabbar Gharib, however, has had some experience with the issue. He told Al-Monitor that he had been approached by a colleague seeking his help in changing her son's name from Omar to Ammar. He ultimately agreed to help. The colleague published the announcement of the change in Azzaman.

The current name game in Iraq is clearly the product of sectarian and political conflict that escalated following the IS invasion. IS' promotion of Sunni symbols and slogans and the Popular Mobilization Units brandishing of Shiite flags and banners threaten to increase sectarian tensions, hampering peaceful coexistence of Iraq's different religious communities.