Is new ambassador sign of thaw in Baghdad-Riyadh relations?

Saudi Arabia restores diplomatic relations with Iraq by appointing an ambassador to Baghdad, but the kingdom will need to recognize the diversity of the Shiite political actors in Iraq and shift its foreign policy accordingly. ‪ 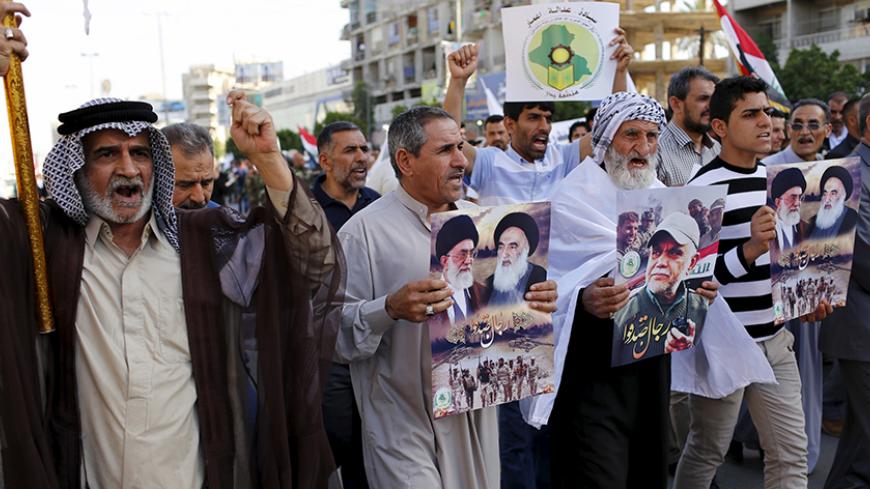 Iraqi men demonstrate in Baghdad, to show support for Yemen's Shiite Houthis and in protest of an air campaign in Yemen by a Saudi-led coalition, March 31, 2015. - REUTERS/Thaier Al-Sudani

On June 3, Saudi Arabia appointed its first resident ambassador to Iraq after 25 years. The long-lasting rift between the two countries followed Saddam Hussein’s invasion of Kuwait in August 1990. At their best, relations between the two countries had always been tense, oscillating between uneasy accommodation and hostility. The appointment of Thamer al-Sabhan as the new Saudi ambassador may ease off the tension between the two countries and encourage other Gulf Cooperation Council states to follow the lead. Iraq welcomed the decision to resume diplomatic relations with Saudi Arabia, according to Saudi sources. But starting a new era of cooperation and trust need more than the restoration of diplomatic relations.

Both countries have drifted away from each other and replaced the rivalry that had been masked in the 1980s by the shadow of the Iran-Iraq War with utter ostracization and even hostility, especially after the 2003 US invasion in Iraq. Since then, Saudi-Iraqi relations became hostage to two outcomes of the invasion, each mitigated against immediate reconciliation and cooperation.

First, Saudi Arabia never came to terms with the new government of Iraq under Nouri al-Maliki and to a lesser extent his successor Haidar al-Abadi. Saudi Arabia found it difficult to accept and live with the dramatic overthrow of the old regime. Although Saudi Arabia must have felt comfortable with the demise of Saddam and the Baath regime, it did not envisage a post-invasion Iraq in which it could not carve a space for its own influence, let alone power. Immediately after the invasion, it tried multiple strategies to find allies in Iraq, mainly among the Sunnis. Backing Sunni tribal leadership, supporting the peaceful Sunni hirak (mobilization) in western Iraq in 2013 and resurrecting Baathists who survived the invasion, Saudi Arabia worked only with Iraqi Sunnis. Yet, none of its efforts yielded tangible success. Saudi Arabia was left without real influence in a country that drifted into conflict and civil war. It had never truly accepted that Baghdad is now outside its sphere of influence under what it described as a Shiite government, marginalizing the Sunni Iraqi population and with multiple Shiite militia, backed by Iran. More recently, it turned its attention to Iraqi Kurdistan where it found it easier to start political and economic ties.

Second, Saudi Arabia saw the 2003 invasion of Iraq as another opportunity for Iran, its regional rival since 1979, to take over yet another Arab country with which it has common borders. The Saudi leadership feared most the Iranian expansion and its aftermath. It warned and reprimanded the United States for allowing it, which must have remained a contentious issue between the two countries in recent years. As late as March 5, former Saudi Foreign Minister Saud al-Faisal told US Secretary of State John Kerry that "Iran is taking over Iraq."

The situation became more complicated with the rise of the Islamic State (IS) in June 2014. Saudi Arabia must have been angered by US President Barack Obama’s refusal to send ground troops to destroy IS but accepted to participate in airstrikes against it. Despite Saudi Arabia’s pledge to destroy IS, the Iraqi government was not convinced that Saudi Arabia is now reversing its previous policies toward the Sunni insurgence. The Saudi intervention with the international coalition against IS did little to convince Baghdad of Saudi's new good intentions.

From the Iraqi perspective, Saudi Arabia remained accused of backing the Sunni insurgencies and the wave of terrorism that Iraq has seen over the last 10 years. Baghdad accused Saudi Arabia of not curbing the flux of its own jihadists from joining first al-Qaeda and later IS. Baghdad holds Saudi-Wahhabi anti-Shiite preaching responsible for its own failure to end the various insurgencies it faced since 2003. Saudis held in Iraqi jails are jihadists caught by the Americans after the invasion, who were then handed over to the Iraqi government. Iraq holds them as evidence of Saudi destabilization of Iraq and fits the Iraqi metanarrative about those foreign jihadists undermining its stability. The early jihadists diverted attention from the multiple failures of subsequent Iraqi governments to establish peace and security, not to mention curb corruption and nepotism, and anatagonize even sections of the Shiite population in the country.

The file of the detained Saudis in Baghdad seems to be a priority for Sabhan. He announced that both Riyadh and Baghdad are now facing the challenge of terrorism, a reference to the recent attacks on Shiite mosques in Saudi Arabia. He also confirmed that Saudi Arabia is concerned with the cases of these Saudi detainees in Baghdad. The ambassador has not yet moved to Baghdad as he is waiting to finalize administrative arrangements.

To achieve more than what the appointment of an ambassador is likely to achieve, Saudi Arabia needs to adopt serious realpolitik strategies when dealing with Iraq. It must recognize that Baghdad is now different from the one that Saddam presided over. It has become an increasingly Shiite city after more than a decade of turmoil that resulted in a serious change of its demography following forced migration, terror and intimidation. Being seen as backing only the Arab Sunnis in legitimate and illegitimate ways is not going to improve Saudi relations with the Iraqi government. Consequently, Saudi Arabia needs to recognize the diversity of the Shiite political actors in Iraq rather than simply lump them together as a solid block, completely under Iran’s thumb. Its inability to understand the diversity of Shiite political groups, the internal political differences and schisms, the ideological complexity of multiple religious and political actors are factors responsible for the stalemate and even ongoing hostility toward Iraq.

A narrow understanding of Iraqi politics only aggravates and prolongs the plight of the Iraqi Sunnis that Saudi Arabia claims to be worried about. Seeing Iraq’s politics through the prism of an eternal historical Shiite-Sunni sectarian prism is bound to prolong the suffering on both sides, antagonize the Iraqi government and prolong its isolation from its Arab backyard. Only by opening channels of communication with the diverse Shiite political actors — both in the government and outside it — will Saudi Arabia save an Iraqi Sunni community from drifting further into radicalization and terror.

It seems that the multiple Iraqi Sunni communities from Mosul to Ramadi have paid the highest price for a historical curse, inflicted on them first by their own leaders and later by foreign invaders and their clients. Their Shiite rivals in Iraq must not continue to hold them responsible for historical atrocities committed by dictators whose Sunnism was unconvincing propaganda and rhetorical at best. Saudi Arabia can best serve their real interest by engaging those multiple voices on the other side of the Iraqi divide. Its policy in Iraq should seek a modus operandi with the Iraqi government and reach out to other Shiite voices in Iraq who have had a long history of calling for an end to the sectarian policies of the post-2003 Iraqi governments.

Among those voices are those Shiite clerics and political actors who pride themselves on their commitment to keeping Iraq in its historical Arab milieu. Also, Saudi Arabia must show commitment to the unity of Iraq and recognize that a new radical predatory Sunni statelet to the north and west of Baghdad will have a devastating impact not only in Iraq but also in Saudi Arabia itself. Only when such a new shift in foreign policy is achieved, a regional power like Saudi Arabia can make a difference.