An Iranian source tells Al-Monitor that it is Iran, not the US Congress, that needs reassurances as nuclear talks in Vienna approach the deadline. 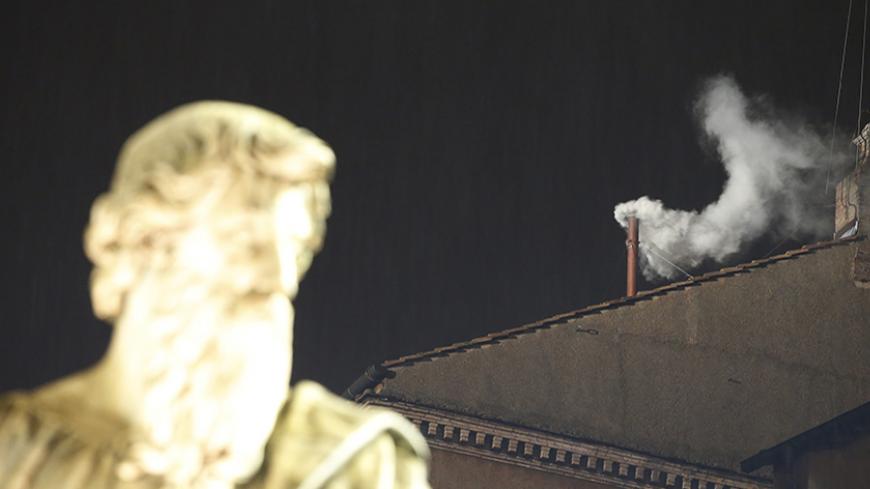 White smoke rises from the chimney above the Sistine Chapel in the Vatican, indicating a new pope has been elected at the Vatican, March 13, 2013. - REUTERS/Tony Gentile

VIENNA — The clouds of Vienna resemble the status of the talks taking place under its sky. For a moment it’s almost going to rain, and then the sun shines as it should on a normal midsummer day. Still, only a few negotiators are getting outside the closed doors at Palais Coburg, where Iran and six world powers are having what should be their last round of talks.

Everyone is waiting for a Vatican-like "puff of white smoke" that might bring 3½ decades of tension between the United States and the Islamic Republic of Iran to a happy ending.

Yet, there are many reasons to believe that this might only be another midsummer dream that might fall apart if there is no real political will for serious sacrifices on both sides. A deal today might be very possible given the circumstances surrounding the talks, while a failure might see the bridges of confidence that have been under construction fall apart, making it nearly impossible for the two sides to come together anytime in the near future.

In a negotiating room overseeing Theodor Hertzl Platz in the heart of Vienna, US and Iranian delegates sit facing each other; sometimes they are joined by others from France, United Kingdom, Germany, Russia and China. It’s rare to hear a word from the Chinese, except when it comes to calling for more effort for a better solution; the Russians have been relatively inactive, and along with China are silent observers. The UK is aligned with the US, while France sometimes plays the role of troublemaker. However, this time around, France has been relatively quiet; it’s now Germany that seems to have its own special view on what is taking place. It has tended to play a role whenever there are serious dilemmas, but are we in the middle of a dilemma?

Missing the June 30 deadline for a deal doesn’t necessarily mean that something bad is taking place.

“The situation isn’t alarming as far as we know,” an Iranian official told Al-Monitor. “We still have a common interest. The sense outside is that there is a crisis, but that is not the real case; we have commonalities and we can work together.” The official stressed that there is always misinterpretation of actions and that the media is playing a big role in this. He gave as an example speculation about Iranian Foreign Minister Mohammad Javad Zarif's return to Iran: “Minister Zarif’s travel to Iran was prearranged. He said this is the first meeting [in Vienna] with Mr. Kerry and he really had a high-level meeting, yet everyone started to speculate and analyze. It might be that he took with him some suggestions, but he was going [back to Iran] with them or without them.”

Zarif’s travel to Tehran raised a lot of questions in Vienna as many speculated it was the Iranian way of showing dismay with what the Iranians say are hitches from the United States, yet the official source denied it, saying that while Iran has had issues on some points, the Iranian team clearly said in the sessions that “there were setbacks and this is not a secret. Fordow is one, the lifting of sanctions is another, there are a few others, the PMD [possible military dimensions], but since we adopted a very strategic decision to engage with the US we are going until the very end.”

The official emphasized that the moment of truth has come and that the United States shouldn’t be hostage to the past, and should make use of the opportunity to start a new era. “We hope that the US takes this seriously because we believe this can help us engage in a longtime process; the resolution of the nuclear file will open the doors for other issues,” he said, adding, “A win-win deal means both sides should win something and not be set back; we are ready, as we said, to do anything possible, but in a process that won’t harm our scientists and our national security. They are asking to meet Iranian scientists, while we have a previous experience where many of our scientists were killed when exposed, so we don’t want to reach a deal at the expense of our people’s lives.”

As for the sanctions, Iranian negotiators think there should be a clear framework, or else “it’ll be an endless game,” the Iranian official said. “We’re not naive; if the sanctions are not lifted simultaneously, we’ll be linked to an endless chapter, and every time they’ll ask for something new and then we won't be able to do anything. Then what if the [US] Congress refuses and the US president fails in addressing the core of the deal. We are going to have to wait for 52 or 60 days until we know if this thing is going to pass or not.” The Iranian official added, “We know well that they know that we know that they know that we don’t have any nuclear weapons ambitions, yet they want to refer to things from the past that didn’t even happen to say they need assurances. We are the ones who need assurances.”