Iran's Twitter blitz is designed to create the conditions for a nuclear deal with Iran. 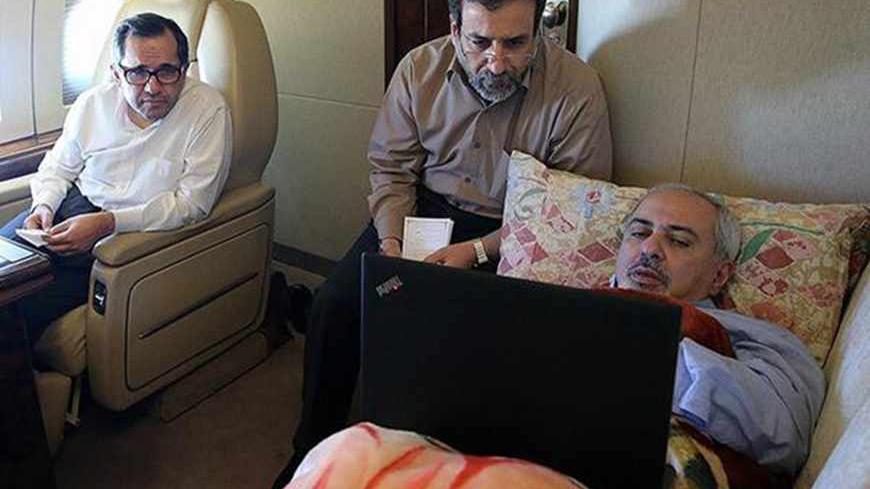 Iran's Foreign Minister Mohammad Javad Zarif works on his computer during the first round of P5+1 talks in Geneva, Oct. 16, 2013. - Twitter/@Iran

It seems that never before have so many felt that they were playing such a significant role in an important diplomatic process, without having any real impact on what is happening.

On Wednesday, Nov. 20, the representatives of the five permanent members of the UN Security Council, Germany and the European Union will gather in Geneva across from Iran’s negotiating team to try to agree on the details of a nuclear deal the sides have formulated during two previous rounds of talks. According to a briefing by US officials, the subject of discussion is the document that the powers had agreed upon and presented to the Iranians at the end of the second round before dawn on Nov. 9. In the hours preceding the nighttime drama at the Intercontinental Hotel, it seemed that the agreement was ready for the arrival of US Secretary of State John Kerry and European foreign ministers for a signing ceremony. The Iranians, however, asked for time to return to Tehran for consultations.

During the first round of talks (Oct. 15-16), I was at the Geneva conference center where the journalists covering the renewed negotiations were gathered. After the second round, I followed the negotiations at a distance through classic journalistic means and through social media. These two vantage points allowed me to analyze the conduct of the two sides. In Geneva I witnessed Iranian public diplomacy in action, and later on I saw how it had succeeded in influencing the talks and creating a particular atmosphere.

Despite the dire economic data Iran faces because of the sanctions the United States and others have imposed on it, the Iranians did not appear as if they had arrived at the negotiations in a position of inferiority. The new negotiators brought with them a new spirit of goodwill accompanied by strong gusts of optimism. It is not yet known to what degree this optimism will manifest around the negotiations table in discussions over Iran's nuclear program, but the Iranians made sure to spread it through intimate conversations in the corridors with the hundreds of journalists who were in Geneva to cover the historic event.

In this day and age, every such statement instantly turns into a tweet on Twitter and thus supposedly becomes common knowledge. Aware of the power of tweets to influence the opinion of journalists — and through them, decision makers — the Iranians have created “amplifying networks” that distribute appropriate tweets on their behalf to tens of thousands of followers.

Thus, at the beginning of the second round of negotiations on Nov. 7, a (purported) statement by a senior Iranian negotiator to Fars, the semi-official Iranian news agency, according to which “the powers have accepted the Iranian draft,” turned into a tweet from the Iran Project’s Twitter account. The account has 11,000 followers, among them a number of journalists inside and outside Iran. Each one of them also has thousands of followers, who without checking or verifying the truth of the claim through traditional journalistic tools, passed along this statement. It and others like it quickly determined the media treatment of the progress of the negotiations.

Take for instance The New York Times headline the same day for a story by the paper's correspondent in Geneva: “West and Iran Seen as Nearing a Nuclear Deal.” The text detailed the “growing gaps” between the sides, but the headline was tweeted to more than 10 million followers of the prestigious paper, and they in turn passed it on to thousands more. This is how Iranian President Hassan Rouhani’s “smile offensive” has been turned into a “salvo of tweets.”

When John Kerry changed his schedule on Nov. 8 and unexpectedly traveled to Geneva, the State Department spokeswoman stated (and tweeted) that when he arrived, he had said that he hoped to bridge the disagreements, but that there were still significant gaps. Here, again, the atmosphere reflected in the reports and tweets was altogether different. “The foreign ministers are on their way to Geneva to conclude the deal with Iran,” one tweet asserted. “Rumors that Kerry is arriving for a signing ceremony,” contended another. One concluded, “We are watching history happen.”

When I tweeted from Tel Aviv doubting the likelihood of a deal in Geneva without Russian Foreign Minister Sergey Lavrov present — the Russians had said he would not be arriving — I received a flurry of opposing responses. The Iran Project proclaimed, “Everything will work out without Russia.” It seems they would have done anything to ensure that the discourse not change, that the optimism not be damaged.

It is interesting that the first political process in which the microblogging social network Twitter was used was the 2009 Iranian elections, when the head of the Green Movement, Mir Hossein Mousavi, lost to former Iranian president Mahmoud Ahmadinejad. Following the election, it was charged that the results had been forged, and serious protests erupted in Iran. The ayatollahs then heavy-handedly quashed what may be called the “modern Hyde Park.” Fom then until today, the use of social networks in Iran has been limited, because it is considered a threat to the survival of the regime. What the regime forbids at home, however, it uses in an effective and sophisticated manner abroad.

A survey published Nov. 13 in the United States revealed that 52% of voters supported the agreement emerging between the powers and Iran although there was no official information about its content and despite Prime Minister Benjamin Netanyahu’s statement that it would be the deal of the century for the Iranians. When Kerry tried to diminish the gravity of France's opposition to the developing agreement and placed responsibility for the failure of the last round of talks on the Iranian delegation — which, as noted, claimed that it had to return home for consultations — Iranian Foreign Minister Mohammad Javad Zarif accused him of spin, in a tweet, of course.

The “tweet party” was also discussed in a State Department briefing in Washington. When the spokeswoman was asked how Kerry had reacted to Zarif’s accusatory tweet, she responded, “The Secretary of State has no particular evaluation of the tweets.” The words Zarif used were weighty but nonbinding, since one can always disown a tweet, even if it is your own. But it nevertheless continues to shape the atmosphere of reports and analysis.

A senior Israeli official, who is deeply involved in the details, said that the Iranians are working along two parallel channels — one involving the powers and another involving the Americans directly. The US channel opened even before the elections in Iran. According to the official, it was understood in Tehran that the Barack Obama administration was keen to reach an agreement. Thus, Israel assesses that Supreme Leader Ayatollah Ali Khamenei had allowed Rouhani to be elected to the presidency in order to give him the authority to reach a deal with the Americans.

This is the context within which one should understand the great effort the Iranians are investing in a variety of areas to capitalize on the wavering indecisiveness of the United States and the West. They are behaving as if they must not miss the opportunity that fell into their hands and are doing everything in their power to constrain the Obama administration and deny it a means of escape from a deal, even if it is only spin at this point.