Iran split over talks with Europe to save nuclear deal

Iranian media outlets and officials are divided over working with Europe to save the nuclear deal, with hard-liners and conservatives insisting new negotiations will offer Tehran nothing. 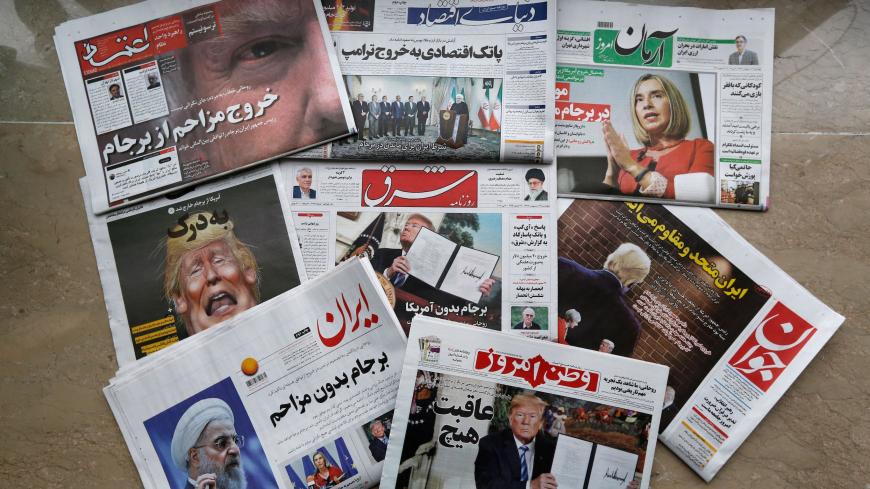 Newspapers in Tehran on May 9, 2018, headline the US' withdrawal from the nuclear deal. - GETTY/Atta Kenare

In brief remarks about the fate of the nuclear deal, Ali Akbar Velayati, who is serving as foreign policy adviser to Supreme Leader Ayatollah Ali Khamenei, has expressed his doubt about the potential for Iran and Europe to reach an agreement over the future of the Joint Comprehensive Plan of Action (JCPOA).

“It is unlikely that negotiations with the Europeans will work out. I hope we reach a result, but how long should we wait to see America applying sanctions against us or lifting the sanctions? We should be self-sufficient,” stated Velayati, who is also head of Islamic Azad University’s board of founders, in a meeting at the university.

Following the US withdrawal from the nuclear deal, the Iranian government announced that it would remain in the JCPOA if Europe provides guarantees to Tehran that its interests within the deal are secured. On May 15, Iranian Foreign Minister Mohammad Javad Zarif met with EU Foreign Policy Chief Federica Mogherini and his British, French and German counterparts in Brussels for talks on how to save the nuclear deal.

Mentioning the heated debates in Iran over the JCPOA and Europe’s potential role in saving it, Iranian commentator Reza Nasri wrote in the government-run Iran newspaper May 16, “Today, the highest Union officials — from [EU Commission President] Jean-Claude Juncker to Mrs. Mogherini, along with the presidents, prime ministers and foreign ministers of the top powers of this continent — insist on the necessity of continuing the JCPOA, and sometimes speak of crossing America.”

Nasri added, “Neither are they theatrical actors who play a role in coordination with Washington, nor do the dynamics of the internal politics of this continent allow them to sacrifice their identity and reputation for [US President Donald] Trump easily. Their stances are serious, reflecting Europe's determination to strengthen its institutions and reviewing the policies of the past and liberation from the domination of the United States and transnational law [secondary sanctions].”

Nasri emphasized, “It is necessary for the country’s diplomatic apparatus to be given this opportunity … to negotiate with Europe and the related actors. Maybe America's withdrawal from the JCPOA will eventually turn out to [serve Iran’s interests].”

Adopting a diametrically opposite position, Kayhan, the mouthpiece of Tehran's hard-liners, slammed the government over its negotiations with Europe. Its editorial read, “[The Europeans] are speaking of preserving the JCPOA, but they are saying at the same time that Iran is destabilizing the region, and therefore we should negotiate. ... [But] what is the negotiation about? It is over the missiles and Iran’s defense capabilities. This is exactly what Trump sought.”

The influential daily went on, “If Europe is telling the truth and is worried about the stability of the region, then why don’t they stop the Zionist regime from bombing unarmed demonstrators? And why do they approve of these unprecedented crimes through their passivity? Hence, Europe’s concern about the destabilizing actions of Iran in the region is a plain lie, and our officials shouldn’t [trust] these liars. They should know that the leaders of the United Kingdom, France and Germany are liars like Donald Trump.”

Akhoundi said May 16, “What we expect from Europe is that they act independently of America’s decision and honor their commitments.” He added, “We should wait until the negotiations of Mr. Zarif with the European Union are over, and then we can give a definitive comment.”

Asked about the delivery of new planes, Akhoundi noted, “Discussions are in progress, but I’m always more interested in news [of contracts] that have been finalized rather than news of [contracts that have yet to be finalized]; therefore, we should wait.”

According to Reuters, Iran Air has ordered 100 passenger planes from Airbus, 80 from Boeing and 20 from Franco-Italian ATR. Due to heavy use of American parts in European commercial planes, the reimposition of US sanctions has imposed huge obstacles on these three deals.