Historic Boeing-IranAir deal at risk amid claims of IRGC use

Charges that the Islamic Revolutionary Guard Corps may use Boeing jets in its operations put the US aircraft maker’s landmark deal with IranAir at risk. 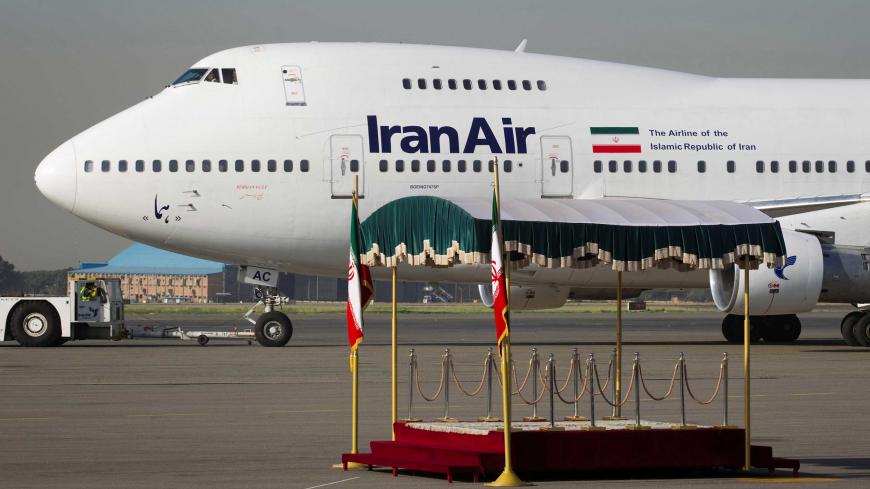 TEHRAN, Iran — US President Donald Trump’s new Iran strategy, including his Oct. 13 refusal to certify that the Joint Comprehensive Plan of Action (JCPOA) meets congressional requirements, will push a contract for 80 passenger jets signed between Boeing and IranAir into uncertainty, despite the confidence both companies have been trying to show.

Trump has specifically referred to the $16 billion order by the Iranian flag carrier, saying he has not made up his mind about the future of the contract. “They were going to buy Boeings. I don’t know what’s going to happen with the deal,” he said in an interview Oct. 22, referring to Iran. Meanwhile, there have been reports going so far as to say that the US administration is likely to nix the aircraft order. One report published Oct. 23 by The Washington Free Beacon quotes “US officials and those in Congress” as saying the deal is endangered amid concern that the jets will be used by the Islamic Revolutionary Guard Corps (IRGC), which the United States accuses of promoting terrorism.

State-owned IranAir negotiated the massive order after Iran and six world powers concluded in 2015 an accord to impose restrictions on the Iranian nuclear program. In exchange, Iran was granted relief from sanctions that had kept its aviation industry isolated for decades. Indeed, sales of aircraft to Iran is specifically part of the letter of the JCPOA. Now, the historic aircraft agreement is at risk of falling apart amid Trump’s refusal to certify Iran’s compliance with the JCPOA. Trump has given the US Congress two months to decide whether to reimpose sanctions lifted under the nuclear deal.

The order for 50 narrow-body Boeing 737 passenger jets and 30 wide-body 777 aircraft was secured in December last year. The US Treasury then had its Office of Foreign Assets Control (OFAC) issue licenses to assure the sale would proceed. Based on US law, aircraft manufacturers must obtain an OFAC permit if more than 10% of their components are of US origin, meaning deals to purchase Airbus aircraft — which Iran has also ordered — need the green light from Washington, too.

IranAir claims its order is safe, even if the United States abandons the nuclear deal. “If the US pulls out of the JCPOA, this will not affect the OFAC licenses. … This will not affect Boeing’s contract with us,” IranAir CEO Farzaneh Sharafbafi stated on Sept. 28. But sanctions experts argue that since OFAC licenses could easily be revoked, nothing protects the order should the Trump administration decide not to allow it to proceed. In this vein, what Sharafbafi suggests “is not possible,” Doug Jacobson, a Washington-based lawyer who specializes in OFAC matters, told Al-Monitor. “Any exports of aircraft or parts would require an OFAC license, whether pursuant to the JCPOA statement of licensing policy or some other US policy.”

In addition to the Boeing purchase, IranAir has ordered 100 passenger aircraft from European company Airbus and 20 turboprop regional planes from the Franco-Italian company ATR, with an option for 20 more. So far, these companies have delivered a total of nine planes, including three Airbus and six ATR planes. The first Boeing jet is scheduled to be delivered to IranAir in April 2018, with the US company expected to start building the wide-body 777s soon.

In a statement issued Oct. 13, Boeing said it will “continue to follow the US government's lead in all our dealings with approved Iranian airlines‎ and will remain in close touch with US regulators for any additional guidance." The company has on many occasions said that it sees itself committed to delivering the planes ordered by IranAir on time. While it has supply permits for these jets, another order it secured in June from another Iranian carrier has failed to get a go-ahead from OFAC. That deal, with Iran Aseman Airlines, involves the purchase of 30 B737 Max jets, plus an option for adding 30 more to the order.

Since OFAC issued permits for the sale of passenger jets to IranAir last year, it has neither said nor done anything further on the matter. However, experts believe there is no such thing as certainty as far as the Treasury sanctions watchdog is concerned. “OFAC policy is at best opaque. And it doesn't tend to answer hypothetical questions,” Joel Johnson, the executive director and an international affairs analyst for Virginia-based Teal Group, told Al-Monitor. “Of course, Boeing has a plethora of lawyers to work the issue.”

Additionally, Johnson said, Section 620A of the Foreign Assistance Act of 1961, as amended, prohibits the Export-Import Bank of the United States from guaranteeing loans to a country that the State Department has placed on the State Sponsors of Terrorism list. Iran is on that list. “There is a presidential waiver, but it's hard to see how Trump would give a waiver if he just pulled the plug on the JCPOA.”

Trump said on Oct. 13 he will terminate the nuclear accord if Congress and US allies fail to reach measures to address what he deems as issues with the JCPOA. On Oct. 16, he repeated that threat. This is a possibility if those opposed to the nuclear deal succeed in lobbying US lawmakers to reimpose nuclear-related sanctions. However, Johnson thinks that is unlikely to happen. “Given that Congress seems incapable of agreeing on anything these days, it’s not certain it would vote to restore sanctions, especially if jobs were at stake.” Although Boeing’s IranAir order only accounts for 10% of its annual production, the company has said the deal with the flag carrier alone supports some 100,000 US jobs.

The termination of the Boeing deal could also be considered a win for Airbus, Boeing’s sole prominent rival, unless OFAC puts a stop to it given the use of Boeing components in Airbus aircraft. Indeed, before Boeing secured its deal with IranAir, CEO Dennis Muilenburg said that if his company cannot sell planes to Iran, no other aircraft maker should. Europe is unlikely to want that to happen.

Indeed, Trump’s renewed anti-Iran rhetoric comes at a time when EU leaders have been vocal in defending the nuclear pact amid tens of billions of dollars of deals having been signed between European and Iranian firms after the lifting of sanctions. In this vein, in an Oct. 16 statement, the European Council said, “The EU is committed to the continued full and effective implementation of all parts of the JCPOA.” Federica Mogherini, the European Union’s foreign policy chief, announced on Oct. 16 she will travel to the United States in November to make sure the nuclear deal is safe in Congress.