European aircraft manufacturer Airbus has delivered its first passenger jet to Iran under its $18 billion contract with the Islamic Republic. 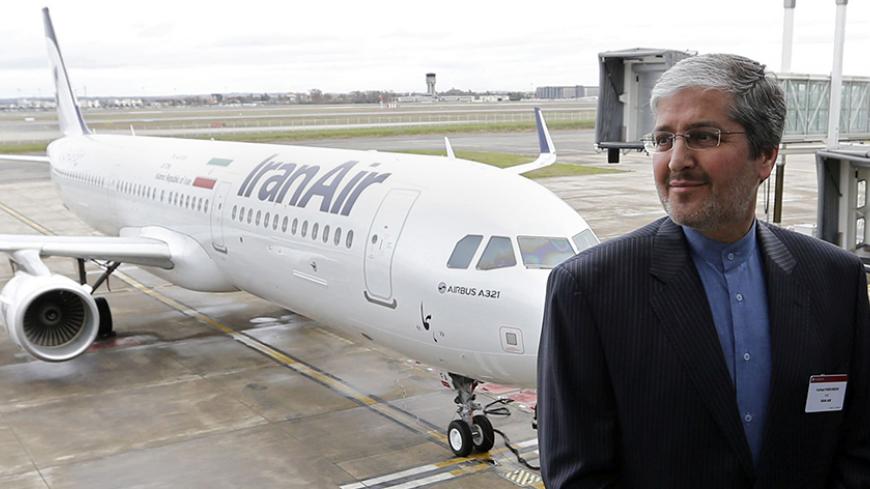 Finally, and against all odds, Iran received on Jan. 12 the first passenger jet purchased from European aircraft maker Airbus. The move is a success for moderate President Hassan Rouhani, especially as he faces a bid for re-election in May.

The Airbus jetliner that landed in Tehran Jan. 12 is the first brand-new Western passenger jet delivered to Iran in decades. The country’s current fleet is mostly comprised of planes purchased before the 1979 Islamic Revolution and thus considered very old.

Under the July 2015 Joint Comprehensive Plan of Action (JCPOA) between Iran and six world powers, sanctions that have prevented Western aircraft manufacturers from selling planes to Iran were lifted. In this vein, Iran in December finalized a deal with Airbus worth $18 billion to purchase 100 new planes. Under the deal, Iran will receive 46 Airbus A320 planes, 38 A330 planes and 16 A350 XWB aircraft over the coming decade. Tehran has also signed a similar deal with Boeing for 80 planes as well as 20 turboprop engines with Europe's ATR.

The delivery of the brand-new jet to Tehran was welcomed by Reformist and moderate news agencies and news sites, which described it as the fruit of the nuclear deal. Meanwhile, conservatives and hard-liners sought to downplay the importance of the development, which is among the first tangible results of the nuclear deal for ordinary Iranians.

The buying of passenger planes has consistently been a controversial issue over the past two years, as conservatives have condemned Rouhani and described his motives for buying aircraft as "electoral."

On Jan. 30, 2016, Gen. Mohammad Reza Naghdi, then-commander of Iran's paramilitary Basij force, slammed the president for his efforts to purchase planes from Western aircraft manufacturers, saying, “The occurrences of the Rome and France trips [of Rouhani] were a stab to the body of the Resistance Economy. These measures are against the Resistance Economy, and in case of continuance of such measures, we should close down the technical universities of the country.”

Following the intensification of the hard-liners’ attempt to cancel the aircraft deals, Rouhani has on a few occasions stepped forward to respond to their criticisms. On Oct. 20, 2016, Rouhani said, “When the government wants to buy a plane, some individuals state that ‘you should buy buses instead of planes.’ … If the government doesn’t purchase planes, they say, ‘What is the result of the JCPOA?’ And if we buy a plane, they say, ‘This plane is luxurious and brand-new.’”

Hard-liners believe the Rouhani administration’s push for the finalization of the aircraft deals is political and intended to sway the public ahead of the May 2017 presidential elections. Describing the buying of Airbus jets as part of Rouhani’s bid for re-election, hard-line parliament member Mohammad Ali Pourmokhtar thundered on Dec. 27, 2016, “Buying 100 planes and creating limited job opportunities in the country while creating job opportunities for the European countries and America is no cause for pride.” On Jan. 1 this year, Rouhani responded to these criticisms, saying, “There are nine months left [in office] for this administration. … It is not appropriate for them to say it is ‘electoral’ if we seek to open a railway or buy planes.”